It's more than just a game. 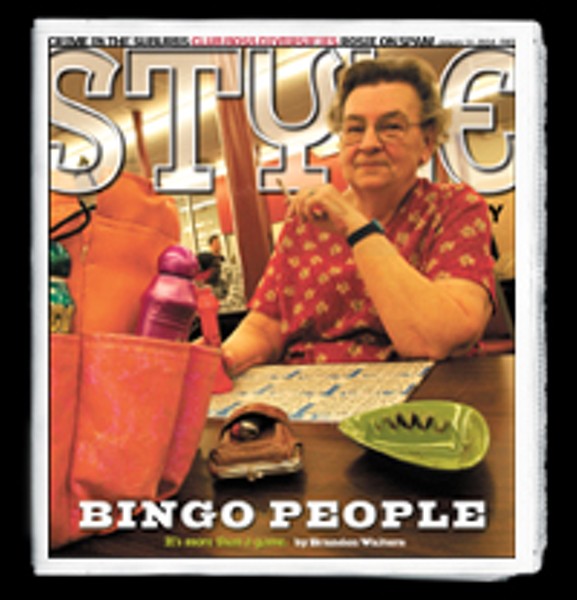 They’re among the first to arrive for the Monday morning bingo Jan. 5 at Temple Beth-El on Roseneath Road. Nancy Copal is playing 27 cards, Bruce is playing 15. They sit and read and talk, waiting for the games to start. They’ve brought along blue transparent chips with metal rims to mark the cards, and magnetic “wands” to clear them.

Like many bingo buffs, the Copals float from bingo to bingo throughout the area. “I win right consistently,” Nancy Copal says. “I won $800 Monday night. Then I may go four or five nights and not win.” She spends roughly $80 a day on bingo, she says, and plays daily. Her husband adds, “She only plays on days that end in Y.”

The two are retired and depend on Social Security for much of their income. They’ve seen the good and the bad that bingo can bring — but mostly the good. Five years ago, they won $4,500 at bingo and took a trip to Hawaii. Last year, they traveled to England on bingo winnings. Bruce Copal operates a bingo on Friday nights for the Lions Club in Chesterfield County. It has allowed the club to give money in ways it never could, he says, adding that last year’s gross receipts from the game amounted to $600,000.

As a steady rain falls, people spill into the basement of Temple Beth-El. Here the bingo is traditional, old-time even. It’s played with antiquated “hard” cards made of cardboard. Packs (paper strips of multiple cards) are available, too, as well as instants (cards with pull-tab tickets) for 50 cents or a dollar per card. “Volunteers still sell games on the floor,” Nancy Copal says. At 33 years and counting, Temple Beth-El’s bingo is one of the longest running in Richmond.

Today marks the first format change of the game in its history, says Carol Davis, director of the bingo operation. For years, the synagogue’s game, largely because of its regulars, has resisted higher-tech methods in place elsewhere, including hand-held computers. They rely on the familiar. When it comes to bingo, that means hard cards, real chips and low prices. This morning Temple Beth-El has unveiled its new $10 pack: three hard cards, a pack of specials and a chance to win two $500 jackpots. Prices are cheaper than at other bingo halls. Still, some of the seniors who’ve been accustomed to the $6 pack are “fussing,” Nancy Copal says.

Yet in a place where an egg-salad sandwich costs $1.60 and coffee is always free, complaints are few. The large group of Temple Beth-El senior volunteers is attentive, amiable and steadfast — as integral to the operation as players and proceeds. They can guess what draws people here.

“I still don’t know if they come for bingo or because they want those hot dogs,” says Sonia Zinder, a volunteer who ran the bingo for years. The kosher hot dogs are prepared onsite by Momma Josephine’s Café. The smell is so delicious it almost overpowers the cigarette smoke.

At 10:30 the games begin. The community room is packed with nearly 200 people. In familiar bingo rhythm, the announcer’s voice chimes low over the mic — a letter followed by a number and then a pause. From the small stage, where the Bingo Bugle regional newsletters lie, comes a percolating sound. It’s the Bingo King caller’s machine cupping balls in midair. After 15 balls are pulled, luck descends. “Bingo!” shouts Kameko Matthews, 26. She wins a $100 game. Three generations of her family have played bingo here for eight years, she says. A half dozen of the family are here now. Minutes later, Matthews’ mother, Mildred, throws her arm high. She has bingo, too.

Pearl Townes turns to bingo to soothe her soul. Her sanctuary is a newly renovated event hall on Broad Street. On Sundays she arrives early, and when she wins, stays late for the second game at 6. Her bingo friends call her The Professional. “You can’t go to a bingo game around here and not know me,” she says.

On Jan. 4, the doors of the Rudlin Torah Academy bingo hall open at 11 a.m. It’s the first Sunday game of the year. The weather is exceptionally warm and bright, and two blocks away, people on Monument Avenue are turning out like eager blooms. But on Broad Street just west of the Boulevard the streets are deserted — except for the bingo hall. It teems with regulars. Bingo players around Richmond call it by its address: 2900.

Townes takes her usual place at a table perpendicular to the rest. If it were a schoolroom she’d be at the head of the class. “I pay attention to everything,” she says, from the lighted bingo boards to the wall-mounted monitors to the announcer’s hand as it picks each pingponglike ball that bobbles up.

With time to spare before the early-bird game, Townes sits on a vinyl chair stacked on another one and chats with her friend Dorothy Palmer. They met at a bingo years ago. The two play the game four or five times a week.

“If you saw my bank book it’s all bingo,” Palmer confides, flashing a wide smile. Townes nods in agreement. At least Townes’ early morning job as a Star Transportation supervisor keeps her home during the week, she says, adding: “I don’t drink. I don’t smoke. I don’t go out dancing.” She pauses to take a bite of the syrup-free pancakes she bought at the snack bar. “I work and I do this.”

It seems Townes has plenty of company. Those piling in now are young, old, black and white. Some are gussied up as if for church. Others, like Townes, are dressed casually. All clutch drawstring totes lined with outside pockets. The bags are specially designed for bingo. The compartments hold brightly colored markers called daubers that blot out squares once a number is called.

Some of the bags yield talismans — an elephant or troll figurine or else a picture of a loved one — that players display and touch for luck. The players also carry cash. They queue up at a counter staffed by volunteers to exchange bills for packs that range in price from $25 to $45. The more expensive the pack, the greater number of bingo “faces,” or cards, you play — and the greater your chances of winning.

This kind of bingo is neither cheap nor child’s play. Townes, for instance, has spent $92 today. In return, she’s received a 12-strip pack of paper bingo cards and a computer — an electronic bingo game that allows her to play many cards simultaneously — plus seven $1 extras for bonanzas, instants, additional jackpot sheets and the coveted winner-take-all game that pays up to $1,000. By the end of the afternoon, 26 games with payoffs of $100 each plus a $1,000 jackpot and the WTA will be played.

Nathan Shor manages the nonprofit’s facility and calls today’s games. “He’s a comedian. Everybody loves him,” Townes says. Amid joking with some regulars, he points out the new glass partition that divides the room into smoking and nonsmoking sections. “If you have bingo, yell it loud,” he instructs the crowd of about 150. Meanwhile, teenage volunteers who attend the academy circle like vendors at a ballpark. At intervals their voices punctuate the silence with dollar offers: “Bonanza!” “Winner-take-all!” “Instant!”

Townes sits carefully poised, scanning her computer and cards, her face holding a half smile. Fourteen games go by and she doesn’t win. She won’t today. With each game lost, she clears her electronic board, then tears the blotted paper games apart from the pack and casts them into the trash.

In the middle of the winner-take-all, Shor stops to announce the jackpot: $849. Already he’s called 37 numbers. The game usually goes anywhere between 32 and 39 calls, Townes notes. The hall is hushed. In near synchronicity, eyes and daubers hover over sheets of paper that, with each added blotch, fill with promise. Suddenly, luck strikes. “Bingo!” cries a woman at the far end of the room.

Owned by the nonprofit Jerusalem Connection — which raises money for Judaic religious education — the building is the only one in Richmond designed and built for bingo. Whereas Temple Beth-El represents tradition, Pop’s represents change. It boasts an $11,000 filtration system that purports to make the hall “virtually” smoke-free.

Alan Lessin operates Pop’s with his brother Chuck. For 15 years the brothers ran Jerusalem Connection’s bingo from another South Side location. Their father, Lenny, was a loyal volunteer. When he died three years ago, the brothers decided they’d name the new site for their dad, whom the bingo people called Pops.

It’s the first Monday night game of 2004. At 7, Lessin announces a lucky number to the crowd. The holder of the bingo ticket, a woman, wins $500 and the chance for $15,000, in what’s called a progressive instant. She loses the jackpot but keeps the $500, and Lessin returns to his post at the entrance.

“I’ll take 75, a small pack and a bird,” a woman says to Lessin, her bingo bag in hand. The woman pays Lessin $90 and takes an electronic bingo device that holds 72 faces and costs $75, her paper pack and an early-bird game sheet. At the counter other bingo items are for sale — Scotch tape, daubers, lighters printed with the words “bingo nut.”

“This is not mom-and-pop bingo,” Lessin points out. “This is big stuff.” Pop’s opened for Christmas and New Year’s Day. and drew sizeable crowds on both holidays, he says. He estimates his nightly giveaways at $8,000. “The possibilities to make profit are incredible” for nonprofits using bingo, he says. “Bingo is not a right, it is a privilege that the state is allowing us,” he adds, because gambling in any other circumstance is illegal.

Mary Burda, 81, says that the game, however costly, is a privilege for her too. “I dream I’m playing bingo,” she says, “I’ve woken myself up hollering the word.” Burda and her friend Phyllis Dunn are at tonight’s game with Burda’s nephew and Dunn’s daughter. The four take up the end of a crowded table in plain view of the announcer, Lessin’s son Jeff. Burda strictly plays paper; Dunn prefers electronic. Burda and Dunn have been bingo mates for 60 years, since back when their husbands were in the service together. Both are widows now.

“It’s something to do. You get lonesome at home,” Dunn says. Burda concurs. “It keeps me from being depressed,” she says. She reminisces about times she played bingo with beans and dried corn instead of chips. “It ain’t nothin’ but money,” she says of the hundreds of dollars she spends weekly to play.

Two weeks ago Burda hit her first jackpot, hollered her first big “Bingo!” in more than a half-century of playing. She won $1,000. And it looks as if she’s about to do it again.

The game is a “coverall,” in which every block of a bingo face must be filled. Burda smokes and dabs red squares onto the sheets in front of her. After 59 calls Burda needs just one more. It’s I-24. She inhales and waits for another letter, another number. S