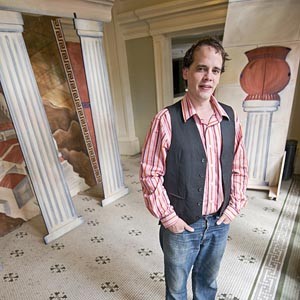 An artist inspired by Einstein? That doesn't seem exactly intuitive. But one of the scientist's quotes — “True art is characterized by an irresistible urge in the creative artist” — has motivated Billy Christopher Maupin to near-constant theatrical activity since arriving in Richmond in 2003.

Maupin has turned in lauded performances in classics such as “Twelfth Night” and “A Christmas Carol,” with acting gigs sometimes overlapping directing stints as in last year's “Butterflies Are Free” for Barksdale Theatre and “Jack and the Beanstalk” for Theatre IV. In a town where different theater companies can be a bit insular, Maupin has proven to have a unique ability to bounce around between troupes.

But his true specialty has been advocating the development of quirkier works that often don't get a viewing in a town such as Richmond. “I'll read a play and think, ‘I have to do this,'” Maupin says. The relationships he's cultivated through the years allow him to assemble top-notch talent for staged readings so producers can see the potential in a fully staged production. He brought the alternately sad and funny play “Rabbit Hole” to the Firehouse Theatre Project and it became one of the best shows of its 2009-'10 season.

His latest projects include “Macbeth: A Gender-Reversed Exploration” for Richmond Shakespeare earlier this month, and “Dog Sees God” for the Firehouse, which opens Feb. 3 — both of which he'll direct.

As Maupin puts it, jokingly, “I basically annoy people until they let me do the things I am passionate about.” It's a strategy that's bringing theatrical innovation to staid old Richmond.