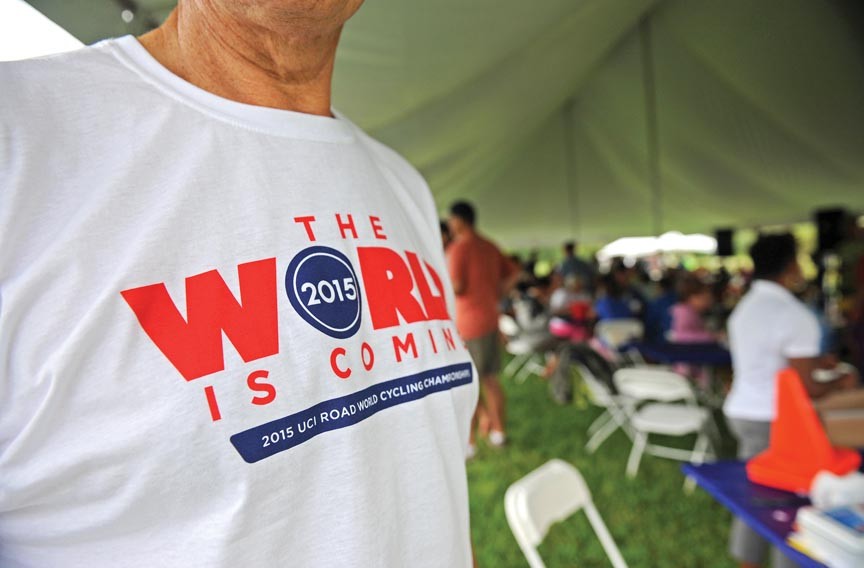 Quick: How many hotel rooms are in the Richmond region?

How many people are expected to descend on Richmond for the UCI Road World Championships in 2015?

Quick math won't solve this riddle — or the lack of regional transit to the suburban counties. These are just two of the challenges facing Richmond 2015, the group organizing the world cycling championships.

In a small, informal fundraising event in the West Creek Business Park in Goochland County on Saturday, race organizers do their best to make the sale. The region is flush with cycling enthusiasts, says Lee Kallman, director of marketing and communications for Richmond 2015. About 170 or so show up to partake in casual rides, barbecue and a little folk music. That it's taking place in one of the empty parking lots built for the thousands of Motorola employees who never came to Richmond is, really, a blessing. (The company never built its planned $3 billion factory.)

"It's just to start to get people engaged with what we're doing," Kallman says of the event. "Let's put a stake in the ground, do an event, keep it on the relatively small side, figure out what works."

A late-afternoon storm sends gusts that periodically lift the tent's stakes off the ground, and camera flashes are momentarily confused with lightning. But none of it seems to bother the cycling enthusiasts, who munch on barbecue and sip beer.

"This is a once-in-a-generation, once-in-a-lifetime opportunity," says Wilson Flohr, chief executive of Richmond 2015. "Three hundred million people watching us, showcasing what we have to offer in the Richmond area. It's enormous."

Flohr says the group expects to reach half of its $21 million fundraising goal by the end of the year. It won't be easy. After recent push back from the counties over the cost, Richmond 2015 plans to meet with officials in Henrico and Hanover counties this week. They desperately want this to be seen as a regional event, not just a city bike show.

The expected economic benefits of hosing the road race will be huge, Flohr says. But they're starting to get questions as to how. If you believe that the race will generate $86 million for the metro area, you also must believe that 450,000 people will show. And that the business disruption downtown will be minimal. And that the race's organizers can figure out how to move around hundreds of thousands of out-of-towners in a city with limited regional bus service — and just 18,000 hotel rooms.

Flohr is undeterred. "We're going to have to figure out the transportation," he says. "Logistics is a very important part of all this."

But, he notes, they still have three years to get ready.