Two local film lovers get the ball rolling on a film center for the arts district. 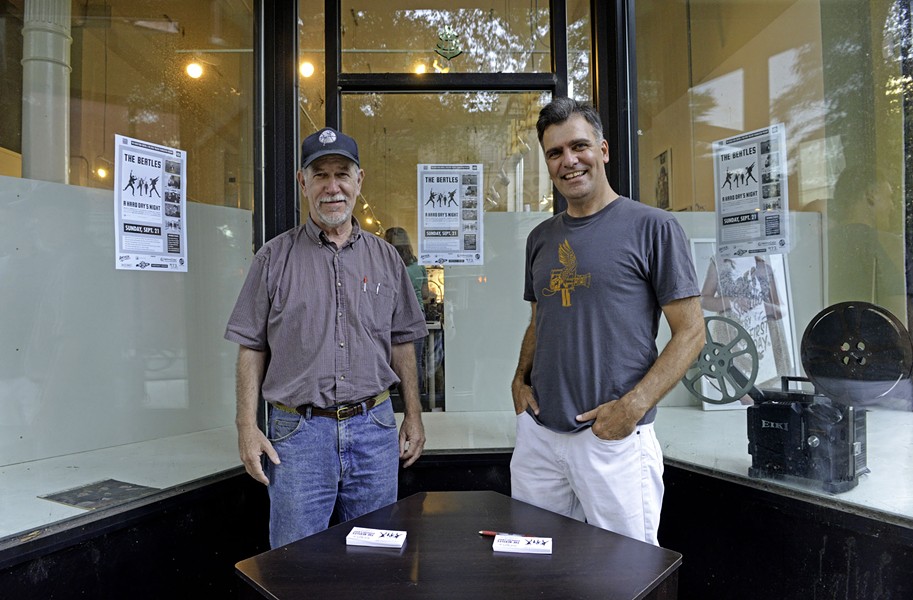 Scott Elmquist Terry Rea, former manager of the Biograph, and James Parrish, co-founder of the James River Film Society, are launching their new Bijou Film Center project with a showing of the 50th anniversary restored version of the Beatles film, “A Hard Day’s Night” at the Byrd Theater.

It was the summer of the bummer for Hollywood. No films cracked the $300 million mark domestically in the worst box-office season since 1997.

It’s almost enough to make you cry into your home-popped bowl of sludge-less popcorn while inviting friends over to watch a DVD, or purchasing that acclaimed on-demand film that has no chance of ever playing locally. Almost.

Who knows why the latest rash of comic-book sequels, fantasy trilogies and Bible epics failed to rake in billions at the box office? Maybe people are tiring of mindless tent-pole franchises, everything in 3-D, everything shot digitally looking the same with just the special-effects money shots changing — and even those not much. Maybe people miss storytelling not geared to 13-year-olds.

Two local film veterans hope they soon can offer an alternative to Hollywood’s endless parade of big-budget noisemakers and gimmicks. They want to open a new community art theater and film education center that embraces the wider world of cinema, showing films that aren’t coming to Richmond as well as small-gauge home moviemaking. Yes, they want your old Super 8 home movies.

They are James Parrish, co-founder of the James River Film Society and founder of Richmond Flicker, a bi-monthly screening of short Super 8 and 16 mm films by local filmmakers that ran for a decade, and Terry Rea, former manager of the repertory Biograph Theatre. The duo is ramping up plans for a new art house cinema and cafe called the Bijou Film Center.

The name comes from the first operating movie theater in Richmond at Seventh and Broad streets, owned by former major league baseball player Jake Wells. (He sold it, as well as another chain of theaters, and later committed suicide during a trip to the country; the Bijou was run into the ground as a bowling alley during the Depression.)

“Richmond is a lot more diverse a place than people give it credit for,” says Parrish, who recently taught a world cinema course at Virginia Commonwealth University, where he works as director of foundation relations. “I think we can find a niche having a place that promotes alternatives to the Hollywood-centric model. We want to champion good films.”

You might think that Criterion Cinemas at Movieland — open nearly two years now — has the local art film clientele covered with its four small screening rooms. Joseph Masher, chief operating officer for Bow Tie Cinemas, says that audiences have been improving. “In Richmond, we’ve been surprised at how vibrant the art film crowd is year round,” he says — “instead of just when students are in town.”

But the Bijou wants to be a hub of information for film production and a place to help facilitate local filmmaking, Rea says, for people who want to “see movies, show movies and make movies.”

After looking at three commercial spaces in the arts district to house their planned 120-seat theater, Parrish says, they’ve yet to find a suitable partner for the storefront cinema and cafe. There have been potential interested partners, but it’s “slow-cooking.” So far, he says, VCU isn’t involved.

Instead of opening the theater, the pair is going to rent space at Anchor Studios on East Broad Street next to Tarrant’s so the Bijou has an office while continuing to hold pop-up events to raise money. The first event will be a showing of the Beatles’ film “A Hard Day’s Night” (1964) at the Byrd Theatre, a joint fundraiser to support the Byrd’s Journey to the Seats and the Bijou film center.

“No one’s seen a version of this film looking this good since 1964,” Rea says about the Richard Lester-directed classic. “We’ll have live music [from the Taters] and we’re hoping to get a good crowd so people can maybe get a sense of Beatlemania.”

The Bijou organizers plan to first raise money to purchase what Rea terms a “superior transfer machine” to start a business of transferring people’s old Super 8 films. “We want to restore films and reach out to amateur filmmakers,” he says. “We don’t want to be professorial guys telling everybody what great movies are.”

They hope this will help spread local interest in film and the Bijou, providing a growing track record that could attract new investors for the storefront project, which they estimate will cost a million dollars.

Parrish attended the last three Art House Convergence gatherings held by the Sundance Institute and notes that 80 percent of the country’s art house cinemas are nonprofits — places such as the Castro and the Roxie in San Francisco, the Austin Film Society in Texas, and the Charles in Baltimore. He’s convinced that Richmond is ready to support a community-based, mission-driven art house cinema.

Parrish says that through the years he’s learned that, in the best sense, a repertory art cinema inspires all artists to do what they do. “We’ll be programming for Richmond’s sensibilities, and we can react to the community and events, unlike the chains,” he says. “You’ll see high and low art mixed together. That’s what I love about it.”

As far as the transfer business, Rea knows something about the secret life of Super 8s. In 1981, a Super 8 film he shot outside of the Biograph on Grace Street was entered into evidence in a murder trial of a cop who’d shot into a tow-truck driver’s truck, killing his son.

“We’re going to see all kinds of footage liberated, gems, which we’re going to use to create a documentary … as well as putting a film of the week on our website,” Rea says. “The most ordinary film can sometimes become important. We could solve crimes, maybe rekindle old romances.”

“To me,” Parrish adds, “there’s a lot of beauty in the everyday.”

A newly restored 50th anniversary print of “A Hard Day’s Night” will show Sunday, Sept. 21, at 6 p.m. at the Byrd Theatre. The Taters will play before the film and after at New York Deli free. Tickets for screening are $5 in advance, $7 at the door. For information, visit bijoubacklight.com.