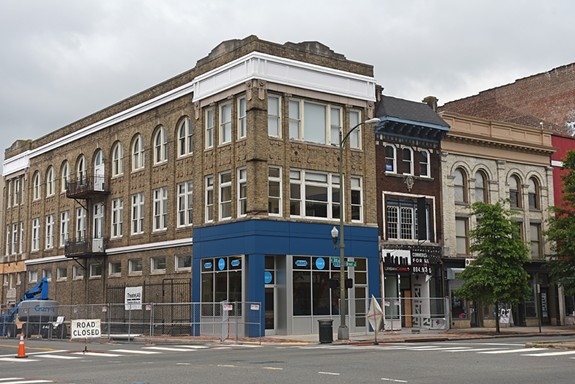 James Parrish and Terry Rea, the film veterans behind the effort to create a local and independent art house cinema, have landed a space to show films.

The inaugural spot for the Bijou Film Center will be on the ground floor of 304 E. Broad St. downtown in the arts district. The space is next to other nonprofits CodeVA and TheatreLab and is owned by developer Matthew Bauserman, a previous Style top 40 Under 40 winner.

“Yesterday afternoon we inked a deal on a space. The renovation is almost done, so later this month we will start moving in,” Rea says. “While this space is probably not our permanent home, it will allow us to incubate our concept in a space we control for about a year. Our first shows will be in August."

The organizers say they’re going to put seats and a screen in the building, as well as a cafe. After a month, they hope to install about 60 of the former upstairs seats from the Westhampton Theater on risers.

"I'm so pleased to have the Bijou Film Center as a neighbor at the corner of 3rd and Broad. What James and Terry are doing is so exciting and there is no better home for them than the RVA Arts District," says Bauserman via e-mail. "I couldn't ask for better than having TheatreLab, CodeVA, and the Bijou as my ground floor tenants - these folks are the real deal, who care about art, culture, education, and giving back to the community."

The Bijou name is a throwback to Theater Row, an early 1900s hot spot of theaters, vaudeville and nickelodeons in the vicinity of what’s now the Library of Virginia.

As Style previously reported, Rea and Parrish envision a roughly 100-seat theater with a cafe that serves wine, soup and other items not commonly found at movie concessions -- something that may help the theater sustain itself. They also seek to preserve fragile older films for future generations.

The Bijou will hold events on a regular basis, Rea says -- hopefully every weekend in September and October. The first events likely will include live music and film screenings, he adds. Information is updated at bijoufilmcenter.org.

“Over the year, we may discover the size and location [of this space] are perfect. But for now we’re signing a short-term lease,” he says. “It allows us to incubate the concept using a room we control. We’re going to continue fundraising, but we want to start showing people what the Bijou will be like.”

For now, they’re looking for volunteers -- including carpenters to help them construct a back bar and install the seats on wooden risers.