Attracting 300,000 tourists in 2015? Breaking down Richmond's bid for a world cycling event. 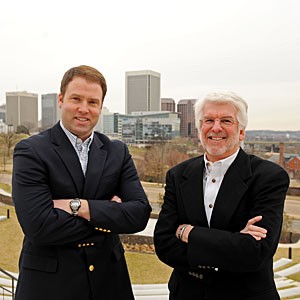 Ah, to be a tier-one city — a big-time, world-class, celebrity city.

Sports promoter David Kalman knew that was one of Mayor Dwight Jones' fondest dreams. So a year ago, Kalman showed Jones a list of six cities: Rome, Madrid, Barcelona, Copenhagen, Florence and Richmond.

“How'd you like to play in this league?” Kalman asked Jones.

To join this elite group, Kalman said, Richmond needed to play host to the International Cycling Union's Road World championships. On Dec. 21, Jones announced Richmond was going to throw its hat in the ring to hold the event in 2015. The winner will be announced in September.

But Richmond and sponsors will have to pay millions of dollars to play. It's up to the three men of promotion company Shadetree Sports to make that happen.

Tim Miller organized the long-running CapTech Classic race and was part of the Medalist Sports group that brought the Tour DuPont to Richmond in the '90s.

Darach McQuaid, Shadetree's partner in Dublin and a former organizer of the Tour of Ireland, comes from a large family of cycling royalty. One brother, Pat McQuaid, is president of the cycling union, but Darach McQuaid says he's careful to keep family and business separate.

David Kalman, managing partner of Shadetree, is an outspoken sports promoter who helped market the successful Tour de Trump and Tour DuPont races that came through Richmond two decades ago.

Officially speaking, the 2015 championships will be a nine-day event in which more than a thousand of the world's elite cyclists will represent their countries in 12 separate races.

Really, Kalman says, it's a big party. But cycling fans are “good rowdy,” McQuaid says — not brawlers. “There's a lot of cowbell ringing.”

The 2010 road championships in Melbourne drew 300,000 people. That's bigger than NASCAR, which draws about 112,000 spectators to Richmond twice a year. “This is bigger than the Civil War,” Kalman says.

Hyperbole aside, “it's actually pretty huge,” says Lester Brown III, public relations chairman for the Virginia Commonwealth University cycling club. While the Tour de France is the biggest televised spectacle of the year, Brown says, “for a cyclist, the largest event you can do that is attainable to all cyclists … is doing a world championship.”

The big one is money.

To win the bid for Richmond, Shadetree will have to pin down a national broadcaster, then convince major corporate sponsors to get on board.

Securing sponsors for any large event is tough, Brown says, because it's difficult to guarantee return on investment: “Making the case is really what Shadetree is going to have to do.”

Kalman says he can't yet estimate the total price tag for the event. For the Canadian city of Hamilton, which in 2003 was the last place in North America to play host to the championships, it cost roughly $11.3 million. That's not including the bills for extra police, emergency services and transportation.

At other world championships, the government has carried most of the costs. But the United States is different, Miller says. Although the city and state will have to contribute, he says, “We need to commercialize this to make it a reality.”

But, he adds, “This is going to be good for everybody if we win this.”

Adames says residents' major worry about the 2003 championships wasn't the money, but the disruption. During the races, schools closed for a week. Between 15,000 and 20,000 out-of-town visitors rolled in. Many residents got the heck out of Hamilton.

But in the end, Adames says, “it was a fantastic event that many Hamiltonians and others in the cycling world still talk about.” The city saw just a small lift in tourism after the races; but it does now have a shining sports-hosting resumAc and the National Cycling Centre Hamilton, a training center for young cyclists.

The Shadetree group says Richmond has a strong case. One: It's not just Richmond's bid; it's the United States'. Two: The cycling union, seeking to expand its audience, has ruled out Europe for 2015. Three: The United States hasn't played host to a world road championship since Colorado Springs in 1986. The logical conclusion, they say, is that it's America's turn.

But Richmond's not the only city in the running. Quebec wants the 2015 championships, “and Quebec's a sexy city,” Kalman acknowledges. The nation of Oman, on the Arabian Peninsula, also has announced its intention to be host.

One key element of Richmond's bid will be the race route. While Kalman declines to talk about specifics, he paints a vivid picture of cyclists racing past the river, the Virginia State Capitol, Monument Avenue and historic Shockoe Slip.

The city's proven that it can bring the cheers. In 1989, when the 837-mile Tour de Trump came through town, race organizers lavished praise on Richmond for the enthusiastic crowds that packed downtown parking decks.

Organizers liked Richmond so much that they moved their headquarters here and continued to make the city a centerpiece of the Tour de Trump and its successor, the Tour DuPont, until the event was canceled in 1996.

Richmond's also easy to get to. Unlike Melbourne, which is a 24-hour journey from Europe, Richmond's accessible from multiple international airports and within a day's drive of half the U.S. population.

The metropolitan area has 17,785 hotel rooms, which is more than enough to handle the NASCAR fans, according to the Richmond Convention and Visitors Bureau. A crowd three times that size could be a different story.

Spectators could fill hotels as far away as Charlottesville and Petersburg, Kalman says. But how will they get here from there? Richmond's not known for robust public transportation; GRTC Transit System bus service to the surrounding counties is limited. Kalman says he's not concerned. Visitors will provide their own transportation, he says, or perhaps the city could run shuttle buses as it did for the Richmond Folk Festival.

Kalman says he believes fervently that Richmond can get the championships, if for no other reason than it's an American city. “Why shouldn't America have a world championship of bike racing?” he says. “What's more American than people riding bikes?”