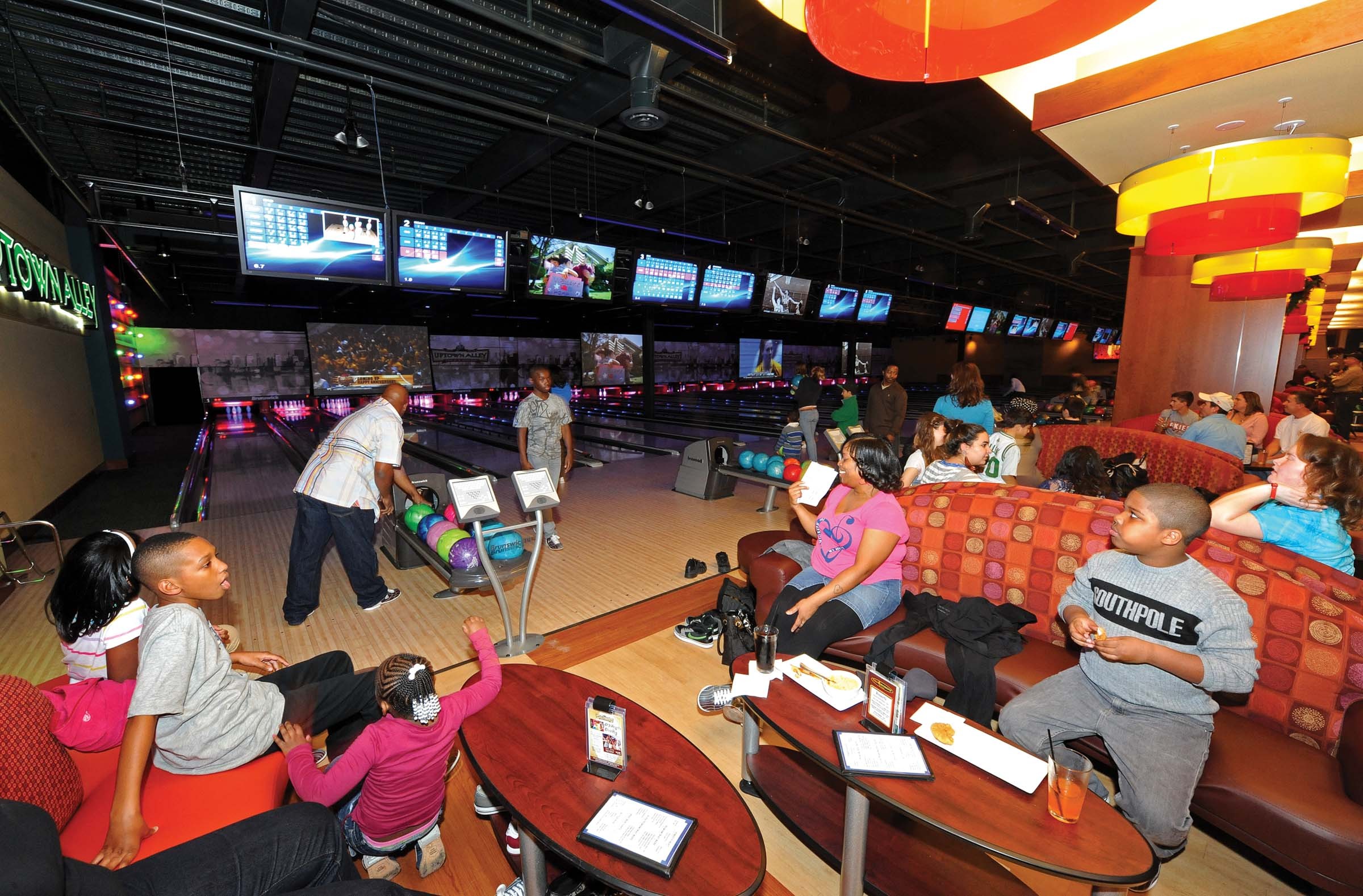 The pins are set. The lanes are waxed. But aside from some employees and a handful of people at the bar, the monolithic entertainment complex Uptown Alley is empty.

Just a few days before Uptown's grand opening late last week, the shiny, empty 57,000-square-foot facility has a scale that's staggering: 38 bowling lanes, two bars, one full restaurant, more than 60 video and prize games and 85 flat-screen televisions. The joint can hold as many as 1,582 people. It's like nothing Chesterfield County has ever seen before.

For co-owner Steve Uphoff, creator of Uppy's Convenience Stores and Southside Oil, the road to creating one of the largest entertainment complexes in the state was an unlikely one. While studying at the University of Florida, Uphoff taught mechanics and worked as a master mechanic at an Amoco gas station. Following graduation, he took a job in Amoco's marketing department.

After 16 years in the corporate world, Uphoff opened the first Uppy's in Emporia in 1996. Uppy's blossomed into 44 locations and in 2010, Uphoff formed a partnership with Connecticut-based Catterton Partners to form Mid-Atlantic Convenience Stores.

Meanwhile, Uphoff had another idea in the works. His son-in-law Steven Moore had approached him with an idea to open a high-end bowling alley in a former Winn-Dixie grocery store in Winterpock. Uphoff saw the advantage of creating an entertainment venue in Chesterfield — but he didn't like the location. Instead, he purchased 15 acres near Brandermill and set up a partnership with his wife, daughter and Moore.The county traded in economic grats, based on the real estate taxes generated, worht about $250,000. In June 2011, they broke ground for the construction of an ambitious $21 million entertainment facility with a bowling alley as its centerpiece.

But why open a bowling alley now? The sport's popularity hit its peak in the 1970s and '80s, when bowling leagues were a major draw. League play was the bread and butter for most alleys, but the large fees and time commitment of a traditional league began to wear on bowlers in the '90s, who increasingly began to favor open play.

"In the last 20 years, a number of bowling centers have closed," says Chris Holmes, associate publisher of International Bowling Industry, a trade magazine. "In the last five years we've seen some leveling off, and also some growth. … New centers are realizing that they need to diversify."

Successful new alleys are taking one of two paths: either building all-purpose family entertainment centers or creating a lounge atmosphere focused on food and drink. The family model often includes additional attractions like miniature golf or laser tag. The lounge model emphasizes an adult atmosphere with sleek furniture and lighting.
"It's more a bar with bowling than a bowling alley with a bar," Holmes says. "It really is the movement right now. You need to have more than just bowling."

Holmes says Uptown is taking advantage of both approaches, with family-focused bowling downstairs and a large bar with private bowling lanes on the second floor. Moore says bowling should only account for 30 percent of Uptown Alley's revenue. The bulk will come from restaurant and food sales.

"There's no concept that's like it anywhere on the East Coast, period," Moore says. "They're calling this the game changer for bowling."

In May, the group opened the first Uptown Alley in Surprise, Ariz., on the outskirts of Phoenix. In addition to bowling and dining, the Arizona alley features a two-story laser-tag maze and a sports theater, roping in customers both young and old.

Both Uptown Alley locations, which are solely owned by Uphoff and his family, are situated near densely populated suburbs. In Midlothian, Uptown Alley is just off state Route 288, behind the busy strip malls along Commonwealth Centre Parkway. Moore says the location is central to the entire Richmond region, and its proximity to the Regal Commonwealth 20 movie theater complex should help make it a destination.

In Arizona, Uptown Alley is sandwiched between the retirement community of Sun City West and Luke Air Force Base, home to the largest fighter wing of the Air Force. Last year, the Air Force announced that the F-35 Lightning II will replace the F-16 Fighting Falcon at Luke, which some say ensures the base will be active for at least another 40 years. Uphoff says the complex in Arizona is performing better than expected — more than double original projections.

In addition to the bowling alley, Uphoff still serves on the board of and has a major financial interest in Mid-Atlantic Convenience Stores, which recently obtained exclusive rights to the Circle K convenience store franchise in Virginia, Maryland and Delaware. The company is in the process of re-branding 52 stores, which include Uppy's, On the Run and Tiger Mart locations.

The convenience store company also has plans for the city of Richmond beyond the gas pumps. The company hopes to build a 10- or 12-story apartment building at Grace and Belvidere, where a BP gas station currently stands. The plan is to design a structure that will complement Virginia Commonwealth University's Institute for Contemporary Art; Uphoff says he has met with the university's architectural group and architect Steven Holl about the project.

As for Uptown Alley, Uphoff isn't done yet. On the remaining nine acres next to the bowling alley he's planning to build a hotel, a water park or both. Though he's met with different hotel companies, he says he may ultimately build a hostelry of his own with an indoor water park similar to Williamsburg's Great Wolf Lodge. Or he may scrap the hotel idea entirely and build a free-standing water park.

"We think it would blend well with the facility," Uphoff says. "We don't believe in holding onto land." S