Big Plans For Everybody

Orbital Music Park, a gym for musicians, is moving on up. 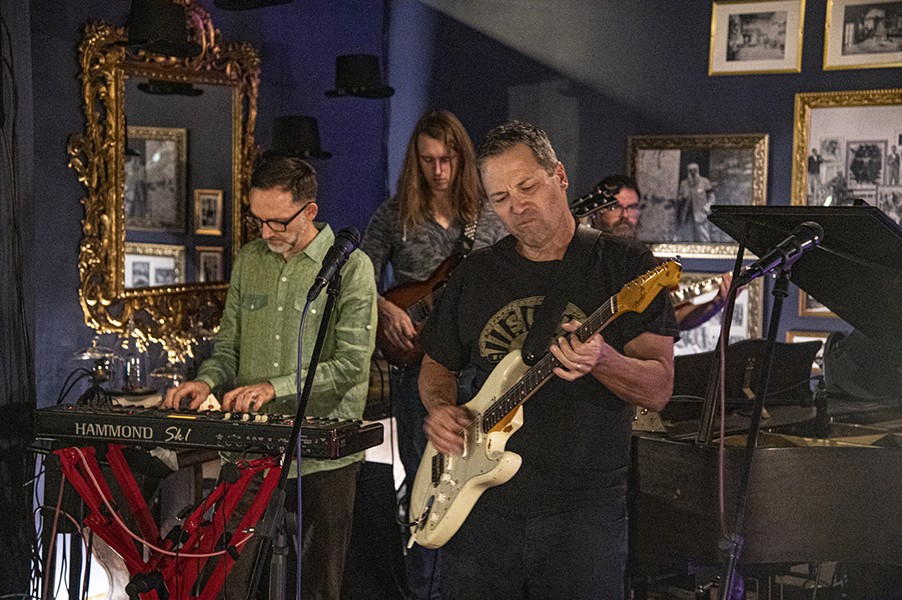 Scott Elmquist Dave Clemans leads a blues jam on Halloween at Révéler in Carytown, which has been holding jams since the warehouse that housed Orbital Music Park closed last month. Tom Illmensee, cofounder of Orbital, is on the keyboards; he is raising funds to relocate Orbital to a much larger space.

The hard thing about describing Orbital Music Park, co-founder Tom Illmensee says, is that it isn't just one thing. "Everything is a remix, right? It's just like a piece of music made up of parts from other music."

In 2019, Orbital, advertising its wares as "a gym membership for musicians," turned a 2,000-square-foot warehouse space near the Sauer's Gardens area into an unusual music making playground. Anchored by two separate 330-ft. rehearsal spaces, named after Richmond music icons Dika Newlin and Eric E. Stanley, Orbital developed into more than a practice facility, says veteran guitarist Illmensee. "It's this crazy quilt of a gym plus a social club plus a speakeasy plus a rehearsal space similar to one that I went to in Budapest … it's a little of everything mixed in."

Adorned with funky decor and an impressive back line of in-house instruments, Orbital's concept took off, quickly attracting nearly 650 monthly subscribers (at $7 a month) who participated in loosely curated jam sessions and special events, like cabarets and songwriting workshops. "We weren't sure what it would actually look like," says co-founder and drummer Morgan Huff. "But week after week we were consistently surprised by the relationships that people made."

The two co-founders (longtime musical partners in bands such as Frog Legs), are currently preparing for Orbital's next phase. "The warehouse is finished, gone, but that's according to plan," says Illmensee. "That space was really a test to explore the logistics of running a place like this and we answered all of the critical questions." The key conclusion? "We need to build a bigger one." 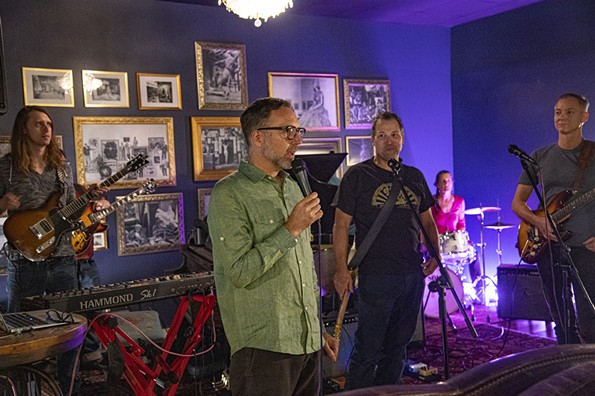 Behold Orbital 2.0. Last month, plans for a new OMP were announced. The new space would be 10,000 square feet, and boast six 330-square-foot pods for large groups and four 150-foot rehearsal sheds for individuals and small units. Importantly, the proposal includes a 3,000-square-foot performance space -- a nightclub with full bar -- in the back. While an actual location for the revamped club hasn't been finalized, and investors are being courted to the tune of $4 million, hopes are for a phased reopening starting in late summer 2023.

"We're taking what's worked and ramping it up," Huff says. "The mechanics of it are necessary but it's the people that really count, and our commitment to making a place where people can be themselves while connecting with each other. We're focused on the community aspect. That's what makes us different. Not just the facilities."

Orbital has undeniably become a reliable resource for all kinds of area musicians.

There's the married couple who can't practice their tuba and saxophone duets at home, the veteran guitarist who put down his instrument years ago and now sits in with young players, there's the aspiring singer-songwriter testing out her songs with a band, the doom metal group that needs rehearsal space. "We've seen so many folks who wouldn't have met in a million years if we hadn't set up shop," Huff says. "I can't think of anywhere else other than church where people have this kind of opportunity to mix with different people from different backgrounds, age ranges and zip codes."

"I was just looking to play music again," says Mary Elfner, an OMP subscriber who lives in Northside. "My kid was getting older and I was getting a little more freedom and wanted to get back into it." The drummer is one of Orbital's longest-running members. "I'm like their old guard,'' she says. Elfner was participating back when a pre-Orbital Tom and Morgan were hosting pop-up jams in local galleries like Art Works. 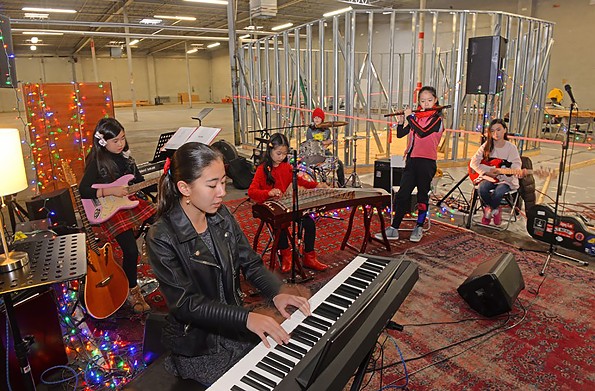 What is being created at Orbital, she says, is a community. "It's a place to meet people, jam with others, explore ideas and hang out if you want. I've done that plenty of times. I also had my birthday party there, which was epic." (The club also offers a special members-only private social network, OMPLand, a Facebook-type app where members can advertise upcoming gigs and jams, share secrets, chat and advertise gear for sale.)

As a member, among other things, Elfner has participated in regular blues and bluegrass jams, and co-hosted a viewing party for “The Beatles: Get Back” documentary. "I also came up with 'Album Club,' like a book club but for music. We listened to 'Remain in Light' by the Talking Heads and had this great track-by-track discussion and it was a big success." Elfner laughs. "But then we had trouble choosing the next album."

When Orbital opened, Carmel Clavin saw an ad for the club on Instagram. The cabaret singer and performance artist was immediately attracted to photos of the space's bric-a-brac-laden lounge area -- these were her people. "That lounge is a great version of maximalism and so I decided to reach out. I wrote to them and said, 'what you do is cool and I do cool things too, let's do cool things together."

Clavin ended up being Orbital's first artist-in-residence, hosting two elaborate cabarets in the space. "The point was to have me there with office hours a couple of days a week, to have a mid-career performer -- that's how I'd describe myself -- talk to [members] about what they are doing, or have someone to bounce ideas off of."

The warehouse space closed last month to concentrate on the move, but the Orbital music jams will continue at Révéler in Carytown, where Clavin, no longer the club's artist-in-residence, works as general manager. "Révéler has live music, we have theatrical shows and we're soon to launch a narrative escape room," she says. "It was a perfect match to become like a satellite Orbital branch." 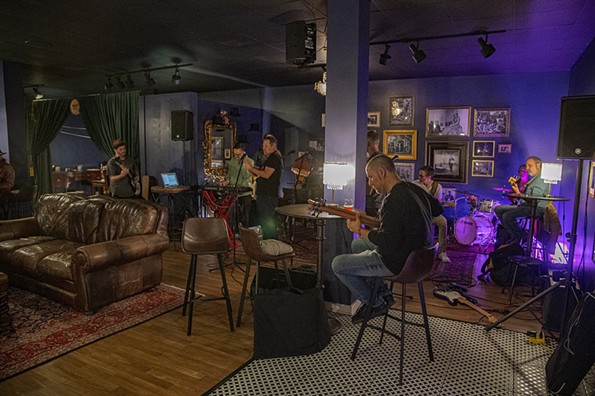 Starting Sunday, Révéler will host the club's weekly jams -- on Sunday through Wednesday nights -- with a different rotating focus (jazz, blues, funk and "mystery box" with different unusual themes, such as "Indian Electronic" or music with a corresponding puppet show). "It's not like an open mic," Clavin stresses. "Mostly it's several people, all Orbital members, making music together, with a leader shepherding what is happening."

Bassist Mike Hawkins leads Orbital's weekly jazz jam, which has previously included well-known professionals such as Grammy-winning saxophonist Jason Arce and trumpeter Rex Richardson trading licks with amateurs. "I had always wanted to have a jazz jam session in Richmond, and Tom and Morgan said let's go for it." Starting in June 2021 -- "right in the middle of the pandemic" -- the Sunday sessions have attracted as many as 20 different players.

"It's also an educational experience," he says, adding that he hopes, with the move, that Orbital's focus will include classes on specialties like improvisational music. "You have to learn how to jam with other people. And that's what this is all about."

For more information on Orbital Music Park, go to https://www.orbitalmusicpark.com