The RVA Big Band at Balliceaux is free in more ways than one. 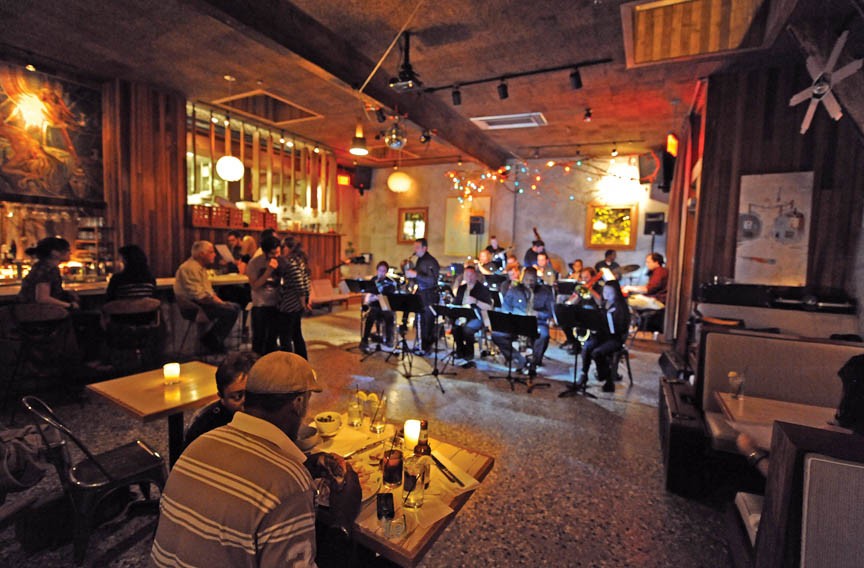 The visceral roar of the massed brass is too much for the confines of the Balliceaux back room, but frankly that's part of the charm. Sit anywhere but against the far wall and you are virtually in the band, whose 17 players spill out from the small stage into the middle of the bar.

Channeled by classic charts from Thad Jones, Count Basie and Charles Mingus, the players meld into a single vital entity, a muscular architecture of melody, countermelody, harmony, rhythm and timbre. That this unity is the result of individualist dedication is revealed in the solos, personal flights of virtuosity that soar for a set number of bars before diving back into ensemble discipline.

The band's configuration reflects both purposeful selection and contingency.  When Rick Rieger started to assemble these players, he'd just returned from an Army posting in Korea. A graduate of Virginia Commonwealth University, with a master's degree from University of Missouri in Kansas City, he enlisted in part to pay down a mountain of student loans, in part to position himself for a seat in one of the military's elite jazz ensembles.

In the meantime he soldiered away in base military bands with players of widely varying capabilities. "I was kind of down about not having anything musical to thrive off of outside the Army," Rieger says. He was inspired by memories of the Devil's Workshop Big Band, whose Monday night performance packed the Bogart's Back Room a decade ago. That space now is Balliceaux, and the club's music booker, Chris Bopst, welcomed a repeat effort.

"I needed to find people who would be willing to dedicate themselves to a project with very little chance of ever getting paid," Rieger says.

The first people he reached out to were players he's known since his student days. Quasi-legendary local trombonist Tim Streagle had dropped off the musical map for years, raising a family in rural woodlands while managing a Boy Scout camp. John Wittman, filling the vital but unglamorous supporting role as second alto, spends his days as a neurological physician. Pete Anderson, founder of proto-Devil's Workshop society band Swiss Swank Account, is a high-school geometry teacher. Rieger recalls returning home from a year on a cruise ship to discover that tenor sax player Jason Scott, a previously unnoticed underclassman, had transformed into a formidable player.

The one significant snowfall of 2012, the night of the first rehearsal, shaped the band. One of Scott's roommates, Marcus Tenney, an original choice for trumpet, asked if he could switch to tenor sax after a sax player bailed. Scott's other roommate, Ballard Midyette, stepped up to replace a no-show trombonist. "So many good players," Rieger says. "Sometimes I feel bad. But it's like choosing a shiny apple in a basket of shiny apples."

Some he knew from sitting in at gigs around town. Trumpeters Scott Frock and Rob Quallich, both powerhouse players comfortable in the technically challenging upper register, played in Your Mama's Brass Band, a precursor to No BS Brass. Bass trombonist Stefan Demetriadis is the master of the bottom end of the scale, playing the lowest-pitched horn for virtually every brass band in Richmond.

Although Rieger first met some of the younger players when they braved the storm for the rehearsal, he hardly could have done better. Trumpeter Ben Heemstra turned out to be a strong soloist. Andrew Randazzo easily is one of the finest bass players from VCU in recent years. Victor X. Haskins just won second place in the prestigious National Trumpet competition; still a sophomore, he bested a field including graduate students.

The balance of the group is drawn from the best of Rieger's Fort Lee bandmates. "Cara Allen is very pretty," Rieger says, "and she can sing her butt off." Guitarist Wes Wagner, a graduate of North Texas State's famed jazz program, is a techno geek whose collection of effects pedals takes up a surprising amount of stage real estate.

But it's a long drive from Petersburg, and so on this Monday night, it's an all-Richmond band. The four vocal charts are left unplayed, and the very capable Alan Parker sits in on guitar. In the second set, Jonathan Greenburg, trumpeter for Chez Roué, is welcomed from the crowd for a bright solo that evolves into an altissimo jousting cutting contest with Frock. But mostly the band tears into chart after chart. Rieger leads from the front, shifting arrangements on the fly, playing his sax with one hand while the other is high in the air, fingers counting down to the finish. Three, two, one.

So many stories, one big sound.

The RVA Big Band plays every Monday at Balliceaux, 203 N. Lombardy St., as close to 9:30 p.m. sharp as Sgt. Rieger can make it. Admission is free. For information, go to balliceauxrva.com.