The head of VCU’s clay department gets an opportunity to teach large scale. 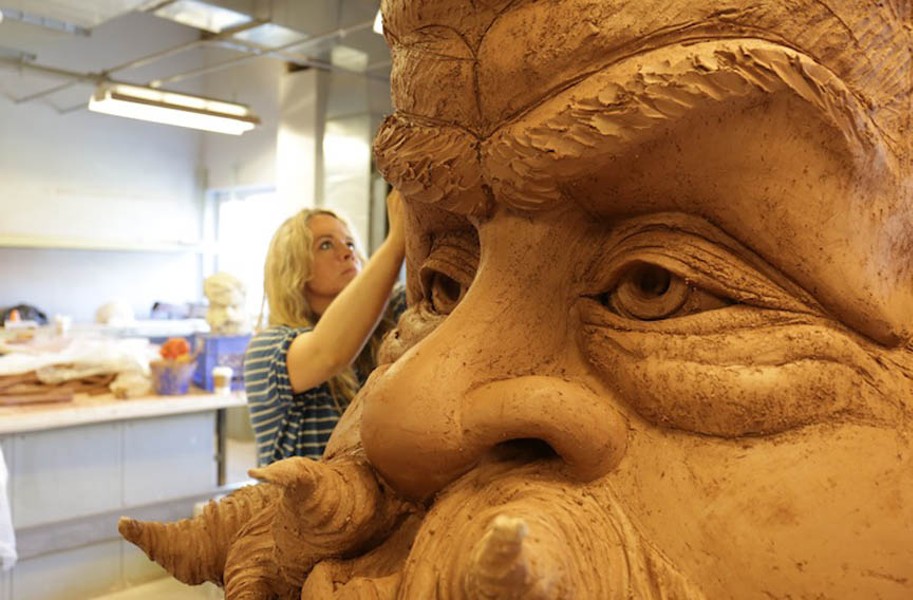 Artist and professor Andréa Keys Connell works on her large-scale commission “Winter Wind” depicting the head of Old Man Winter for a 17-acre garden in Delaware.

Andréa Keys Connell, the head of the clay discipline in Virginia Commonwealth University's craft and material studies department, tells her students that if they're comfortable, they're not growing.

She had a chance to put her own advice into practice when she received a commission for a 6-foot-tall head for William H. Frederick's Ashland Hollow, a 17-acre garden in Delaware. They met three years ago when he attended a show of Connell's and was impressed with her work. Out of the blue, he contacted her in May seeking her sculpting services.

Connell typically focuses on clay figure installations, but Frederick wanted a massive head depicting "Winter Wind" to be used as the centerpiece for his winter garden, one of four devoted to the seasons. "I've always worked on a large scale, but this project really pushed it," she says from the clay studio in VCU's arts building on Broad Street. "But it also opened new doors in terms of what I can do in the studio."

The project presented many technical challenges, including that of facilities. Special shelves had to be ordered from Canada to enable the sculpture to be forklifted into the kiln. Few places have kilns big enough to fire a 6-foot piece made with 1,300 pounds of clay and water. Fortuitously, VCU does.

Seeing an opportunity for her students to get some first-hand lessons in large-scale and commission work, Connell hired graduate students as studio assistants for "Winter Wind." One was Chris White, who mixed all of the clay for her and built a suitable table on which to begin creating the head. Her studio manager, Jason Hackett, had been an assistant to Japanese-American ceramic artist Jun Kaneko — familiar to Richmonders through his exhibition of dangos, the totemlike sculptures that opened the Virginia Museum of Fine Arts' sculpture garden — and Connell says he was invaluable with technical considerations.

After air drying, the head will be fired for a week and then painted gray to evoke winter. The plan is for it to be installed by the end of September in Frederick's Delaware garden with a 200-foot path extending from the mouth of the sculpture, foliage planted on either side.

After a summer spent creating the largest sculpture she's ever done, Connell has one more hurdle to get through: lifting it with a crane and setting it down.

"But once that's done, I'll be really happy to see it in place," she says. "From the very beginning, I've imagined his place being the home for it. I fell in love with that garden. It's like a living artwork. I'm thrilled it's going to live there." S