An exhibit provides new perspective on insects by making them larger than life. 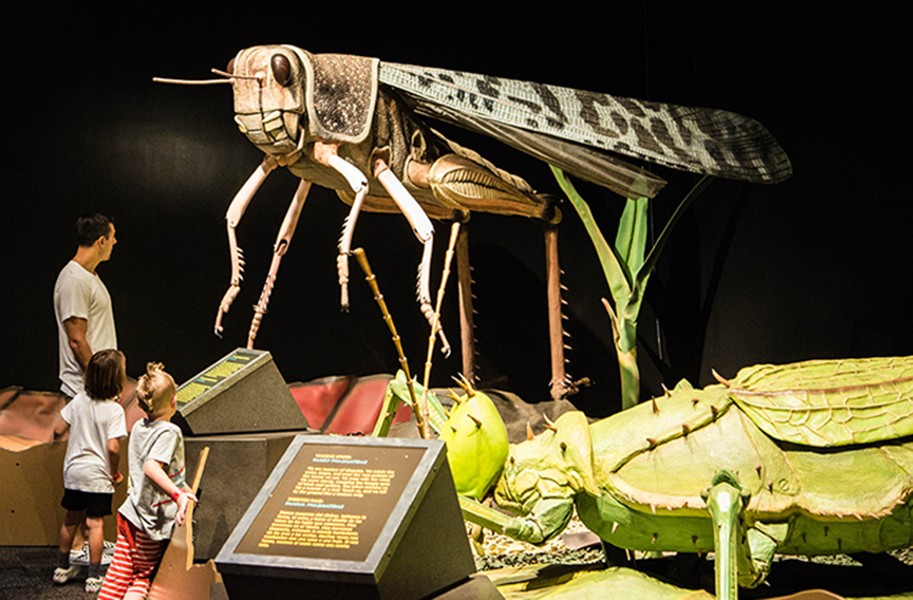 Originally, the Science Museum of Virginia intended to bug Richmond for seven straight months and be gone by late summer. But as with so many things, 2020 changed that.

“Giant Insects,” which features six enormous, robotic bugs from 40 to 120 times larger than life, as well as interactive stations and terrariums with live bugs, opened last January with plans to close in August. But with science lovers staying at home to be safe, the exhibit didn’t get the visitors it deserved, so its run has been extended through the holidays. And if ever an exhibition could serve as a distraction from the train wreck that this year has been, this is it.

Visitors can watch as a desert locust – its body higher than a visitor’s head – rears up and extends its 20-foot wingspan while making its distinctive sound. Even fiercer are two huge rhinoceros beetles engaged in mortal combat, although whether over a mate, food or territory is up to the viewer. Slowly rocking back and forth, the two beetles angrily push and shove their horns at each other. Far calmer to observe is a wiggling caterpillar that becomes a swallowtail butterfly once it’s mature. These and other animatronic insects are set against backgrounds of giant leaves and plants.

Timshel Purdum, director of playful learning and inquiry, says the museum is all about changing people’s perspective and that this exhibition does that by making guests the size of insects and the bugs the size of humans. The traveling exhibit was designed by California-based Kokoro Exhibits, which is known for blending art and science with impressively scaled animatronics that move like their real-life counterparts. Within each bug, pneumatic valves and cylinders are orchestrated by computers to simulate the movements of actual insects. Each insect body is designed around a steel skeleton, while the outer body is made from either polyurethane, molded fiberglass or a combination of both, then meticulously painted to match the live model.

It’s that entertainment value that’s central to the museum’s mission.

“If guests aren’t enjoying themselves and their experience feels forced or too formal, then we aren’t doing our job,” Purdum says of the goal to ignite curiosity and encourage discovery. “If a 9-year-old is entertained while exploring the exhibit, that’s an important experience, but if that 9-year-old goes home after viewing the exhibit and wants to watch a video about how caterpillars turn into butterflies, or read about how different spiders make different webs – or no webs – or goes hunting for insects living in their backyard, then we have really added value by connecting them to the science that’s around them.”

She acknowledges that the exhibit isn’t going to teach guests everything about insects, but hopefully there’s at least one mind-blowing piece of information each visitor will glean from the show that the viewer will think about on the way home or mention to family and friends later.

And while witnessing a giant praying mantis using its razor-sharp forelegs to snatch its prey is awfully compelling, the exhibit is more than just enormous bugs. It’s also fun facts – there are 2 million bugs for every human – along with stations where visitors can hear eight insect sounds, including the hissing of a cockroach. Locked terrariums allow for up close and personal peeks at tarantulas, a vinegarroon, millipedes, beetles, cockroaches and two types of crabs. Check out the blue death feigning beetle, which, when startled, fakes its death by turning over and becoming rigid. Three hands-on insect head replicas invite guests to control their mouthpieces to better understand how a dragonfly, honeybee and mosquito have their own particular ways of devouring food. The opportunity to watch a mosquito pierce human skin for a drink of blood is not to be missed.

The museum has made numerous adjustments to operating procedures to help ensure a safe environment. Guests are asked to purchase tickets online in advance, everyone in the building wears a mask at all times and touched surfaces are rigorously and frequently cleaned. Guests are provided a stylus for use with certain exhibit elements and the number of guests who can visit is limited, the better to allow for proper social distancing.

In a year that’s been challenging at best, “Giant Insects” is a satisfying diversion from the real world and a tribute to the creatures that can eat houses, drink blood and devour crops. Best of all, the Kokoro Exhibits team designed the exhibition for all ages. Younger children tend to be fascinated watching the animatronic insects move, but what adult wouldn’t be intrigued to learn that a male moth can smell a female from 5 miles away?

“There’s something almost nostalgic about the lower tech, but no less awe-inspiring, aspects of seeing the bugs move,” Purdum explains. “Adults probably need the perspective-switching experience more than children, to be honest, because so many of us forget to appreciate insects for the fascinating, complex and essential creatures that they are.”