It isn’t all about eating. Restaurant designers translate an owner’s ideas into a memorable experience for diners.

Ash Daniel ​Designer Helen Reed used natural elements in the interior of the Daily Kitchen and Bar in Carytown to reflect its menu of local, organic dishes.

When it comes to designing a restaurant, it’s all about that space.

“Chefs and owners are thinking about how it feels when you walk in,” says Helen Reed of HL Reed Design — the creative force behind such restaurants as the Daily and Tuffy Stone’s barbecue place in Glen Allen, Q Barbeque.

A few years ago, restaurant owners weren’t as concerned about the relationship between the interior design, the look of the menu and how it reflected the food served. Now they’re tuned in.

“If I’m doing a farm-to-table restaurant,” Reed says, “I’ll want natural elements around. I’ll want communication between people, so I’ll want that community table.” All of the details work together to underscore the overall concept that the food inspires.

“We become part of the team,” she says. Much of the nuts and bolts of a restaurant designer’s work are to make sure that the space will meet the requirements of city code and the Americans with Disabilities Act. This isn’t the flashy stuff. It’s ensuring that a bartender has enough space to move around behind the bar and that wheelchairs can maneuver in bathrooms.

And a careful calibration of where employees will be in relation to diners is the crucial underpinning to any design concept. There has to be flow.

When he tackled the cavernous Big Whisky space, McCormack, helped by two carpenters, designed and built everything himself in four months.

He left the big beams with wooden studs on the ceiling from the former Texas de Brazil, but removed the matching columns. After the space’s bright red walls were painted a more subdued color, it magically transformed into a place reminiscent of an old hunting lodge. Tabletops came from walnut shelving that once held law books at a courthouse, refinished church pews create seating for waiting diners, whiskey barrels serve as bar seating, and an old nut warmer from Miller & Roads is slated for refurbishment for bar snacks.

“I hate to see people going in and just leveling everything inside the space when you can take the bones of something and reinvent it,” McCormack says.

Lighting is key to creating atmosphere, and he removed at least half of the fixtures that were in place.

“The space was designed to make you always be in hurry,” he says of the former Texas de Brazil. “I want people to be here for two or three hours. I’m not as interested in turning tables as I am in giving people an experience they don’t normally have.” 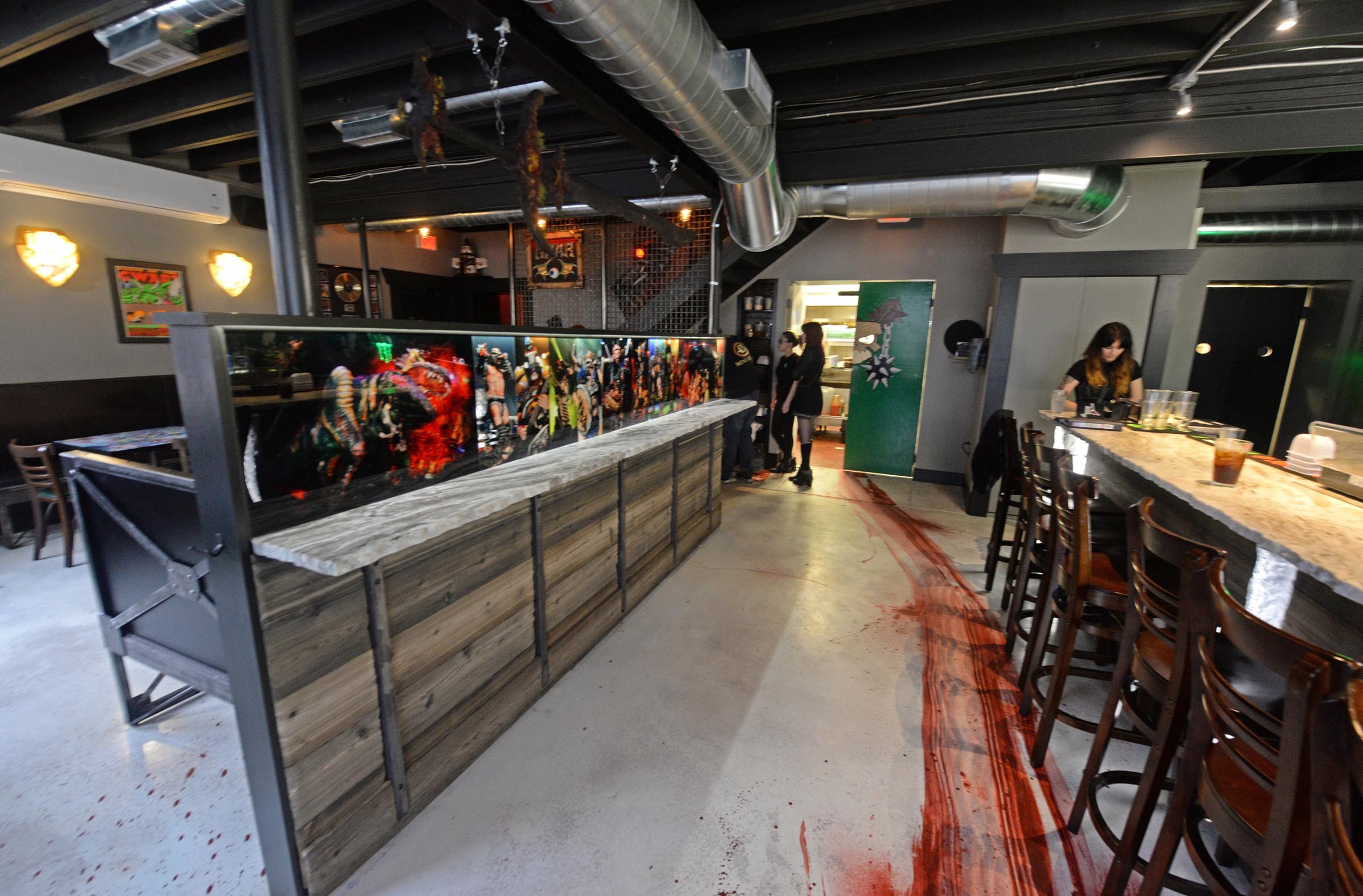 The owners of GwarBar felt the same way. Designer Barry Griffin’s job was to translate the band’s mythos — extraterrestrials hell-bent on conquering the world — into a physical space. According to the story, in the beginning the Gwar characters were banished to earth and imprisoned in ice in Antarctica. The jagged bar top and supporting acrylic columns are a nod to that “ice temple.”

“The weathered wood is intended to mimic reclaimed lumber from the Viking ship they conquered,” Griffin says. And the shield in the middle of the bar reminds diners that the scum dogs of the universe are marauding warriors.

Slaughter also is an important part of any Gwar show.

“One of the strongest elements in the space is the floor,” he says. To create the blood spatter that’s spread across the restaurant, Griffin doused himself in red paint and was dragged to the kitchen. He held a squirt bottle under his chin to mimic arterial spurts.

“Most clients don’t see three-dimensionally,” Reed says. It’s up to the designer to help them envision the project so that the restaurant they end up with becomes an easy, seamless experience — whatever that experience might be — for every diner who walks through the door.