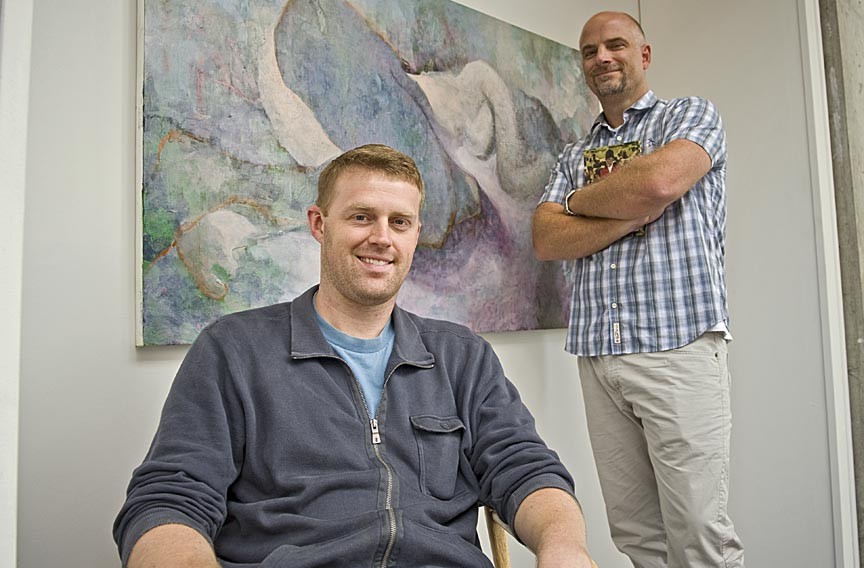 “Cavemen in Space,” “American Barbarian” and “Barbra in the Sky with Neil Diamonds” might sound like the punch lines to a bad joke, but to the folks at AdHouse Books, they’re serious business.

Founded in 2002, the boutique publishing house has printed 45 art books, graphic novels and comic books. While it might be small, the Richmond-based company has established quite a name for itself in the comic realm. Books published by AdHouse have won almost every award in the industry, including honors from Domtar, Ignatz, Communication Arts, the Los Angeles Times Book Prize, AIGA and two Eisner Awards for James Jean’s “Project Recess 2: Portfolio.”

Publisher Chris Pitzer says while the company could print five to six projects a month, it prefers to be more selective, usually releasing five to six books a year. “Hopefully the quality of our library reflects that,” he says.

One standout from the AdHouse canon is “Afrodisiac” by Brian Maruca and Jim Rugg. The book is an anthology for a fictional blaxploitation character as he progressed from a newspaper strip and into the big time.

“It’s a love letter to blaxploitation comics — if they existed,” Pitzer says. “That was a very proud moment.”

“Afrodisiac” was nominated for an Eisner in 2010 for best humor publication. “The books are absolutely beautiful. Chris puts a lot of thought and care into the design of the book,” says Cindy Jackson, an archival assistant at Virginia Commonwealth University’s Cabell Library. “We’ve made a concerted effort to purchase everything AdHouse puts out.”

The company’s next release will be “Blue Collar/White Collar,” a retrospective of Sterling Hundley’s illustration and painting work. Hundley, who works as a professor at VCU and an instructor at the Illustration Academy, says that this will be his farewell to illustration work so he can focus on painting.

“It’s a nice, tidy way of wrapping up one chapter and embracing another one,” Hundley says. For 13 years he’s worked as an illustrator, with work appearing in Rolling Stone, the Washington Post, the Los Angeles Times and The Atlantic.

“Blue Collar/White Collar” gets its title from Hundley’s transition from the blue-collar world of illustration into the white-collar world of painting. Wedged between the full-color pages of the book are sketches and notes made by Hundley about his work.

“I’m really pleased with what he’s done with my property,” Hundley says of Pitzer’s efforts. “He really is an internationally recognized publisher. … AdHouse produces some of the best artists’ books that are out there.”

AdHouse is breaking form this year, publishing about 10 books instead of the usual five. But don’t expect Pitzer to have any big changes in mind for his publishing house. “We are a boutique, we are small press,” he says, “but we’re a juggernaut.” S