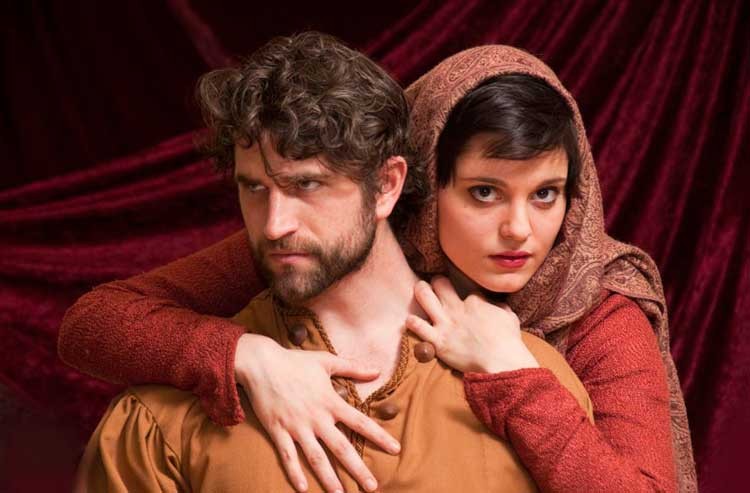 Richmond Shakespeare has a history of bringing in visionary directors from out of town to do innovative work here. Its longstanding relationship with New York's James Alexander Bond resulted in a blockbuster "King Lear" last summer.

The company now has lured Oregonian Jan Powell for "The Tragedy of Macbeth," and she's produced a lean, mean and downright spooky staging of the infamous Scottish play that will keep viewers' attentions riveted.

Powell takes advantage of the flexible Gottwald Playhouse at CenterStage to create an alley for the play's action between two seating sections, pumping up the stage fog and employing an eerie lighting design by BJ Wilkinson, who also is responsible for the spare scenic design. This configuration guarantees that most audience members are just a few feet away from the conjuring witches, sword-fighting noblemen, and murderous schemers whopopulate the play.

In another bold move, Powell shaves significant chunks from the Bard's script, trimming the cast down to just seven actors and narrowing the focus to the fractured family dynamics between war hero Macbeth (Ryan Bechard) and his wife (Zoe Speas). After a battlefield victory, Macbeth stumbles upon a gaggle of witches who foretell his reign as king of Scotland. Informed of the prophecy, Lady Macbeth dedicates herself to plotting the demise of King Duncan (Andrew Mitakides), bolstering her husband's wavering resolve at several turns. Before the Macbeths are driven mad by their own treachery, friends such as Banquo (LaSean Pierre Greene) and foes such as Macduff (also Mitakides) will be devastated.

Even with a trimmer script, signature moments of the play remain with key soliloquies delivered with vigor. Speas makes an electrifying Lady Macbeth, her scary, single-minded ambition giving way to a fragile madness. Bechard adds another indelible portrayal to his growing résumé, navigating Macbeth's tumultuous journey with aplomb. Mitakides has a formidable physicality and, while given short shrift as Duncan, he makes up for it with a passionate Macduff. In supporting roles, David Janosik as a drunken castle porter and Greene's Banquo are standouts.

But it is Powell and her inventive direction that make this Macbeth a winner. S

"The Tragedy of Macbeth" plays at CenterStage through Feb. 26. Call 232-4000 or go to richmondshakespeare.com for tickets.