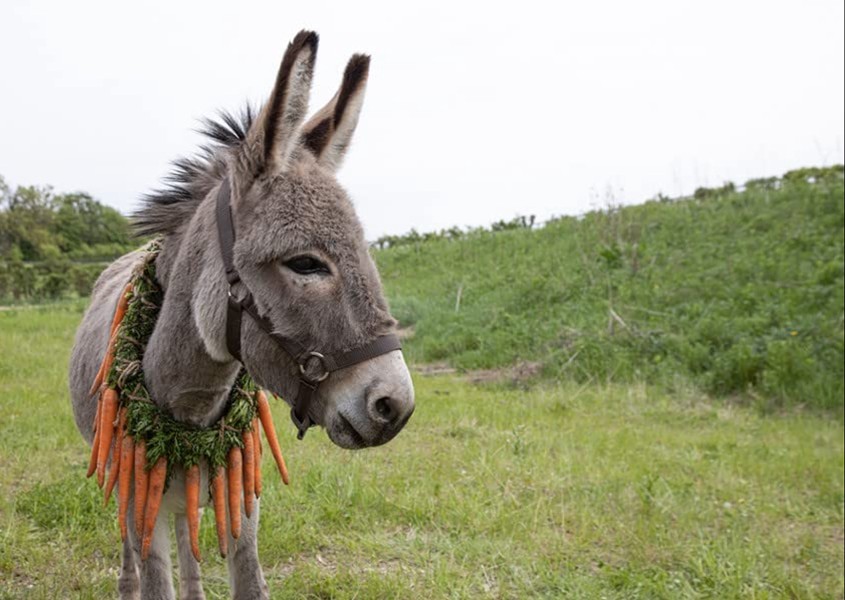 The wandering donkey from "EO," a Polish drama directed by Jerzy Skolimowski that was inspired by Robert Bresson's classic 1966 film, "Au Hasard Balthazar."

And here we are with the cultivating and listmaking and task-mastering that greets year’s end. For brevity, I will reduce 2022 in cinema to two fortune-cookie sentiments: Hollywood has forgotten how to make an engaging pop movie, and the prestigious awards items weren’t much better. Both modes of filmmaking are being numbed to death by a sense of obligation: Hit those demographics! Sell those easy, guilt-assuaging progressive platitudes! Or, in other words, hit those demographics!

Everyone wants to blame the potential extinction of the pop movie for adults on the people at Marvel, and there’s certainly blame for them. But I think the disappearance of the star vehicle and the continued polarization of culture in general have also contributed. Filmmakers speak either smugly to their niche or to no one at all. This is why movies like “Top Gun: Maverick” have been overrated. It’s stupid as hell, but it’s at least trying to be an old-school star vehicle that plays to all sides of the aisle.

It was the best of times; it was the worst of times. Pop movies might be dead as anything other than glorified stadium arena concerts, but movies as an encompassing art continue to mutate and flourish. To find them, however, you have to ignore the glorified hype machine that is most of the media. You have to look in the cracks for the nitty-gritty. In many cases, streamers are the new art houses, though they are also like the discount Blu-ray bins at Wal-Mart, as it’s easy to get lost in them. Perhaps this list can get you started.

These films do enrich and complement one another, and their staying power has surprised me. One’s a ‘70s-era slasher movie wannabe and the other’s a shoestring Sirkian melodrama with geysers of surreal violence. Collectively, they signal the arrival of Mia Goth, assuming Hollywood can handle her.

One of the truest and most powerful portraits of an alcoholic I’ve ever seen. Andrea Riseborough is extraordinary, and Marc Maron offers sturdy support.

Truly outrageous and subversive horror, which can’t be taken for granted in this era of the so-called “elevated” horror film.

Given what critics are often willing to settle for, their nearly complete rejection of this half-good screwball adventure doodle rates as scandalous. Christian Bale is the movie’s MVP.

Two releases by one of the finest filmmakers working anywhere today, South Korean maestro Hong Sang-soo, who specializes in intimate, idiosyncratic, structurally daring relationship dramas. He is also intensely funny and prolific. Here are two of his recent films. You will see Hong on this list again.

Dominik’s “Blonde” was justifiably maligned, but his second concert film with Nick Cave is a searing and beautiful examination of the creative process in the wake of grief.

Forget Blaxploitation. It was a New Black Wave of American cinema, and it shames what we call progressive cinema now. Mitchell reminds us of these and other truths in this heady, lively cocktail of archive footage and film criticism.

An astonishing apocalyptic vision rendered in stop motion. A work of obsession decades in the making that, in its lo-fi terms, might even make James Cameron blush.

On vacation in Mexico, a wealthy man suddenly drops of the grid. He wants … nothing. If Franco had been able to resist explaining why the man wants nothing, he might’ve had an existentialist classic in the key of Antonioni. He can’t resist, but Tim Roth’s soulful, pared-down performance is a significant accomplishment.

In something like real time, this moving 4-hour German documentary captures how a teacher reaches his young students on a minute by minute basis. I know what you’re thinking: work. Trust me, the intimacy of this footage feels miraculous.

Slipstreams of longing and regret dominate a sci-fi fable that suggests a warmer Philip K. Dick or a less self-pleased Charlie Kaufman. The handmade effects are among the most suggestive of the year.

Hollywood, here’s a reminder of how to do style and spectacle. The most purely astonishing action movie of the year, with one of the best dance sequences of all time.

God bless this rude, crude, very funny “Ghost World” for a new generation. I didn’t think anyone could make a picture this indifferent to likability anymore. That’s why it’s so likable.

Poet Siegfried Sassoon’s life is fashioned by Davies into an erudite and devastating memory play.

Hollywood, here’s how you do melodrama. Denis’ cocktail of sex, politics, and classist resentment and yearning is her most intoxicating film since “Let the Sunshine In.”

Aging legend Jerzy Skolimowski refashions the iconic donkey movie “Au Hasard Balthazar” into a wrenching essay on his own mortality.

An aging couple is destroyed by dementia in this audacious, brutally moving tour de force merging of style and subject matter. Noé’s best film so far.

There were many filmmaker reminiscences this year. Most of them were terrible, but Linklater’s detailed, loving, yet tough-minded childhood fantasy was poetic nirvana.

I told you Hong would pop up again. This story of an actress in crisis takes a familiar Hong set-up to new depths of rapture.

Hogg turns her “Souvenir” series upside down in this identity-redefining ghost story, which features Tilda Swinton in perhaps the greatest performance of her career.

With little money and enormous reserves of empathy and invention, D’Ambrose fashions a story of the birth of a child’s artistic consciousness and the splintering of his family into a modern “Magnificent Ambersons.” It shames the corny hijinks of Spielberg’s bigger, duller, more obvious yet similarly themed “The Fabelmans.”

Best Actor: I’m supposed to say Colin Farrell for “The Banshees of Inishirin,” right? He’s very good, but my favorite is Tim Roth for “Sundown.” Honorable mention: Dario Argento for “Vortex.” Let’s throw in Nick Cave for “I Know This Much is True.”

Best Actress: Cate Blanchett is getting all the attention and her performance in “Tár” is ferocious and showy. We’ve seen Blanchett eat a movie alive before though. By contrast, Andrea Riseborough’s performance as a Texan alcoholic in “To Leslie” is profoundly detailed, a work of texture and gravity, and it’s my favorite performance of the year. Tilda Swinton (“The Eternal Daughter”) is virtually tied with Riseborough, and Mia Goth (“Pearl”) rounds out the category.

Best Supporting Actor: David Lynch, “The Fabelmans.” David Lynch as filmmaker John Ford is a brilliant casting coup, and Lynch casually walks away with this elephantine movie in a matter of seconds. Paul Dano is quite good too, in an un-showy role as Young Spielberg’s dull yet inventive father, the secret artist stuck between bigger personalities. Dano also lent creepy beta energy to the Riddler in “The Batman.” Christian Bale’s wounded whack-a-doodle doctor in “Amsterdam” is another highlight.

Best Supporting Actress: There were too many glib, eat-the-rich parables to count this year, and “Triangle of Sadness” was among them. But when Dolly De Leon ascends the center stage at its midway point, playing a cleaning woman accorded an unexpected level of power over her masters, the film almost comes to life. De Leon plays the character as a human, with needs, flaws and contradicting sources of pathos, rather than as a talking point.

Also: You may notice that many of my various picks sounds intense and sad and serious and obscure—stereotypical critic fodder. A. There’s more exuberance and humor and energy and fun and passion than you may first suspect in these titles. B. I don’t hate “light” movies but modern culture seems to have lost a sense of how to produce or even receive, say, a comedy or dashing adventure.

I watched the 1936 film, “My Man Godfrey,” on the Criterion Channel recently. It’s a prototypical screwball comedy and it’s as good as it’s reputed to be. I was struck by the accomplished simplicity of it—it’s direct, funny, poignant, and relies on the actors somehow overplaying and underplaying at once. It also has more to say about how members of various classes distance themselves from one another than something as smug and obvious as “Glass Onion.” It is enjoyable and affirms your humanity without you feeling had. Try to do that again cinema. There’s your New Year’s resolution.