Calls for civilian oversight of Richmond police are growing, but how far might such powers extend? 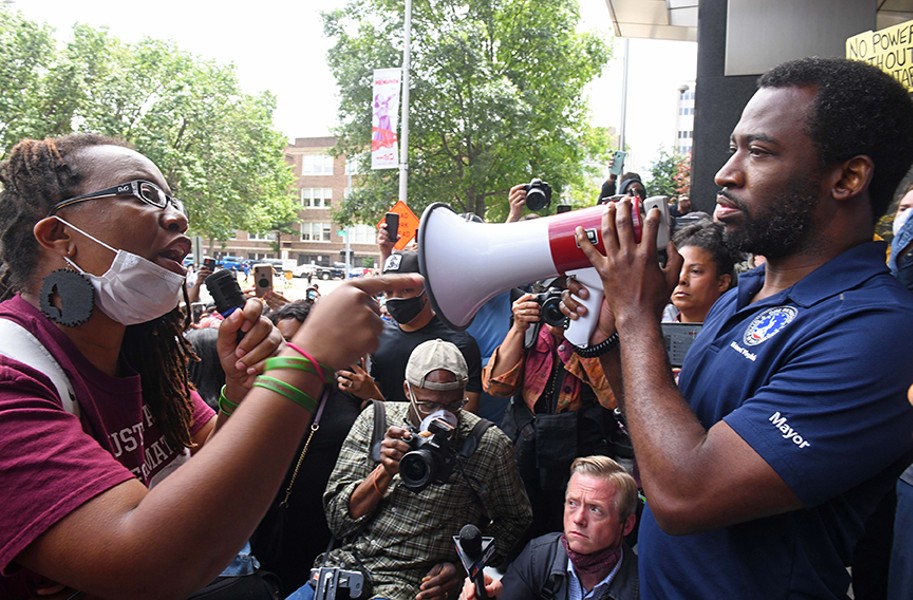 Scott Elmquist Princess Blanding, sister of Marcus-David Peters who was killed by a Richmond police officer in 2018, confronts Mayor Levar Stoney during a June 2 news conference at City Hall. “Fire every last one of their asses,” she told him regarding police officers who tear-gassed peaceful protesters at the Lee statue.

Richmond Black Lives Matter activists have joined nationwide calls for stronger oversight of police through civilian review boards – but these bodies are often handicapped by weaknesses such as lack of independence from public safety authorities and lack of disciplinary power, legal experts say.

As of 2018, in about 150 of the nation’s nearly 18,000 police departments, civilian review boards typically investigate cases of officer misconduct with the goal of increasing police accountability. But these boards are often flawed, says Angelo Pinto, a lawyer and human rights activist, because members are handpicked by police and can’t recommend systemic departmental changes or disciplinary actions.

A few years ago, Pinto compared nearly a dozen review boards around the country: “Review boards that work well and do the right things are very few and far between,” he says.

In Richmond, demands for an independent review board are central to calls for police reform. Local Black Lives Matter activist Princess Blanding, whose brother Marcus-David Peters was shot and killed by a Richmond police officer in 2018, joined others to circulate a petition calling for the board and improved mental health crisis response. As of Sunday evening, the petition was less than 2,000 signatures away from its goal of 75,000.

Peters, a high school biology teacher, was naked and unarmed when he was shot after charging at a police officer while threatening to kill him. Peters’ family says he was suffering a mental health crisis. Then Commonwealth’s Attorney Michael Herring ruled the incident a justified shooting.

The petition, headed by Blanding and the Richmond Transparency and Accountability Project, asks that the review board be an independent body with seats reserved for people of color, public housing tenants and people living in heavily policed areas. The board would have the power of subpoena to conduct independent investigations of accusations of officer wrongdoing. Additionally, board members would audit the department “to identify racial biases and other systemic issues in RPD’s policing [and] … recommend policy changes.” Local activists have requested the board also have disciplinary power.

It’s important the board members be elected and not appointed to allow the decision-making process to avoid influence by the department, says Phil Wilayto, head of the Virginia Defenders, a longtime local human rights activist group working with Blanding.

The RPD was unable to return requests from Style regarding the review boards as of press time.

Many public safety officials still argue that civilian review of officer conduct may be unfair because it would leave decision-making power in the hands of people without training in police work, according to Seyffert. However, activism, 24/7 news cycles and smartphone recordings from bystanders have only increased public calls for civilian oversight.

In light of the international George Floyd protests, increasingly the question for public safety officials and the communities they serve is not whether oversight is needed, but to what degree. Greater oversight could improve public cooperation and make communities safer in a country “where roughly 40% fewer African Americans than whites believe that the police use an appropriate amount of force, treat racial and ethnic groups equally, or hold officers accountable,” writes Olugbena Ajilore, a researcher with the Center for American Progress.

Last year, the Richmond Police Department had 125 use of force incidents, and complaints for excessive use of force were made to the department in seven instances. Improper action on the part of police was found in two of the cases and in one, no improper action was found. The remaining cases were still open at the end of 2019 and there is no additional information on their outcomes in the RPD use of force or complaint data.

Mayor Levar Stoney and Richmond Police Chief William Smith say they support a Marcus alert. Smith says his department has been diligently working on enacting the alert for months. Stoney says the city would look into the creation of a review board and City Council has directed staff to study how both initiatives could be implemented. Smith says he welcomes anyone interested in serving as a civilian reviewer to contact the department.

Blanding has called for the reforms since her brother’s death, without much success until recently, she says.

“It has been a moot point for me to continue to set up meetings with [Stoney and Smith],” Blanding explains. “It took people rising up for them to finally listen and finally take action.”

“I don’t condone any violence,” Blanding says about the unrest downtown that resulted in arson and property damage. However, ongoing protests since then have mostly been peaceful, even with large crowds marching and police using tear gas on protesters June 1 at the Robert E. Lee monument. A civil rights lawyer recently filed a lawsuit against the Police Department regarding this incident that seeks damages and the officers’ identities.

Councilmember Kimberly Gray, who is running for mayor, says she is researching “best practices and models” for civilian review boards but at this point “can’t speak intelligently” about how a board in Richmond would be structured or the extent of its authority.

But Gray admits that more civilian input could be a positive change.

“I have a black 30-year-old son, and I haven’t always felt he would be safe,” she says. “Anything we can do to be safer and make our community more confident in the police, I’m going to do that.”

The Richmond Police Department already has a degree of civilian oversight, but less than demanded by the accountability project. The department internally investigates use-of-force allegations that can range from complaints that handcuffs are too tight to deaths. Possible criminal allegations are referred to Richmond’s commonwealth’s attorney. Other complaints go before a panel of two or more residents chosen by the department who have attended the city’s Citizen Police Academy, as well as four officers not involved in the incident. The panel determines if the incident warrants officer discipline and the chief makes the final decision on what action is taken.

While the structure of civilian review boards differs across localities, a number of criminal justice scholars note the bodies generally either investigate individual complaints about officers, evaluate police internal investigations or review broad issues of misconduct within the department. Sometimes, boards conduct a combination of these functions.

Although details of Richmond’s proposed review board have yet to take shape, local activists favor an independent body that could address both potential systemic racial inequalities in the department’s policing and individual officer misconduct.

Twenty-year old Anthony Hunter recently protested in front of the Robert E. Lee statue on Monument Avenue, having driven from Norfolk to protest the city’s historic role in racial inequality. He says that working through the details of a new civilian review process is necessary in a nation where so many people of color feel unfairly targeted by police.

And it’s important that people of color are members of the review board, he says.

“You’ve got to have black faces in high places.”