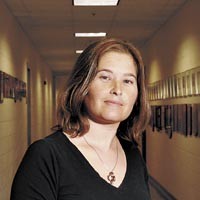 Like anyone with cable, Beth Bonniwell has seen her share of “Law and Order: SVU.” But for her, watching the show is a bit like bringing the office home.

The only civilian member assigned to Henrico County's special victims unit, Bonniwell is charged with extending a lifeline to victims of some of the county's most heinous crimes.

“We see kids who are sexually abused, beaten and neglected every day,” says Bonniwell, who only wishes her caseload was fiction and not brutal reality. “I wish we could solve cases in an hour,” she says of the TV show. “That's not reality at all.”

Bonniwell, who once fancied the sciences as a profession, came to Richmond to attend Virginia Commonwealth University's social work program after her volunteer work with a hospice in Delaware. One day, a young mother — whose husband had recently died and had been helped by Bonniwell — “showed up with her two children and a black eye.”

A new boyfriend had beaten her, and Bonniwell was so affected by the experience of helping the woman she changed her own life course: “I said, ‘Wow, this is a whole world I’ve never been exposed to.'”

Bonniwell does good work with Henrico, but calls the job her “paycheck,” while calling her work with Greater Richmond Stop Child Abuse Now her true passion. She says she idolizes the program's director, Jeanine Harper: “I want to be just like her.”
In the meantime, Bonniwell is doing just fine being herself.