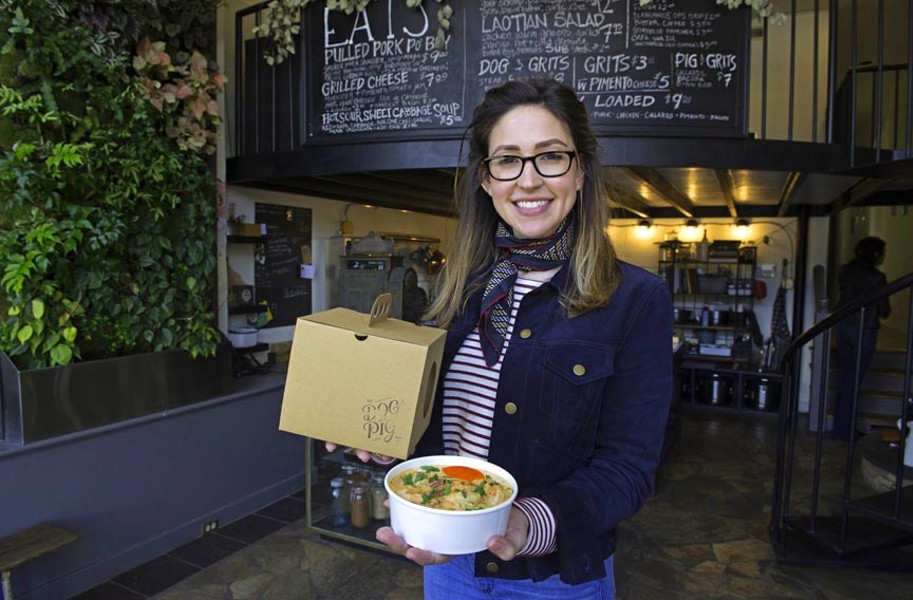 Scott Elmquist Isabel Eckrosh offers shrimp and grits in one of the Dog and Pig Show’s environmentally friendly to-go containers.

It started as an underground supper club — the real kind, with information about it passed along by word of mouth instead of news releases. Isabel and James Eckrosh — James was a chef in New Orleans before the couple moved to Richmond — originally planned a food truck and were trying out potential dishes on friends. Those friends brought other friends, and before long, the Dog and Pig Show was looking for a space with a foundation instead of one with wheels.

The Church Hill spot opened a little more than a year ago, and Richmonders from all parts of the city flocked to it. With its chalkboard menu and impressive living wall, Isabel's design makes waiting for an order a pleasure. And James' food makes you wonder if you've stumbled into a Michelin-starred restaurant in disguise, with such dishes as shrimp and grits that mix it up a little with bacon butter and kimchi puree and a Bangkok bun with a house-made Thai patty, bacon, a fried egg and ginger-curry mayonnaise.