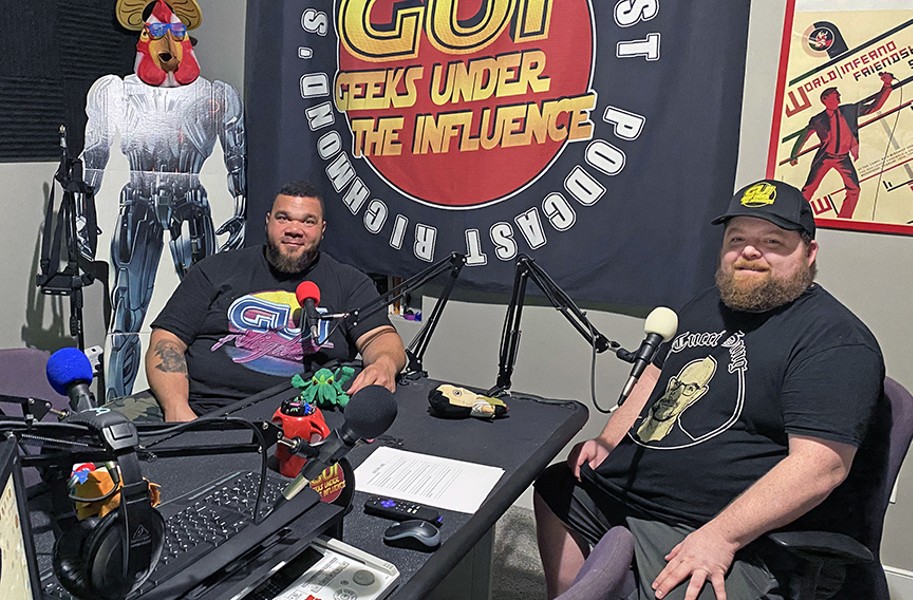 Geeks Under the Influence Podcast

Michael “Hobbit” Bickett started Geeks Under the Influence in 2015 when it was basically just him and some friends sitting around drinking beer and geeking out over comic books. Their first year of podcasting was mostly garbage, he admits, until they became more technically proficient. As they learned the medium, the flagship show gave birth to about 10 spinoffs – there are eight currently, he says – which went on to win multiple awards while establishing it as a central hub for podcast geeks.

Other podcasts on the network include Smack My Pitch Up, Bickett’s show where he recasts famous movies; Beautiful Disasters, a podcast devoted to schlock movies; From the Mouths of Madness, a horror podcast; Geekfathers, about being a geeky parent, duh; and Deeply Upsetting, where Bickett and his girlfriend attempt to answer the internet’s weirdest questions, “an improv show basically,” he says. Bickett doesn’t like to get into audience numbers but notes that the demographic breaks down to about 60% men and 40% women, usually in their mid-20s to mid-to-late 30s. Most of the podcasts are created by folks in their early to late 30s. And while the shows can be crude and colorful, Bickett says they are “unproblematic” in terms of crossing any unacceptable cultural lines, which ultimately are policed by Apple and listeners.

“Basically the network’s motivation is not to be the biggest podcast ever, it’s really more about celebrating podcasting,” Bickett explains. “Most of the guys in the network are old punks or metalheads who grew up with the DIY ethos and podcasting is really the last bastion of the Wild West where you can basically do whatever you want. … I love that about it: It’s a celebration of your purest expression and the audience will find you.”

The crew occasionally records live shows at local Comic Cons between recording their weekly shows and shorter stuff like the GUI precap, which previews what’s coming out in different media that week. Bickett is also giving back and sharing knowledge: For those interested in learning how to start their own podcast, he founded the RVA Community of Podcasters group on Facebook, which has more than 150 members.