There’s no shortage of solid pie available in the city.

There are the pandemic-born newcomers like Pizza Bones, Red Goat Pizza and Hot for Pizza, all of whom have actively built their own rabid fanbases. There are longtime favorites Bottoms Up, 8 1/2 and Belmont Pizzeria, which were all neck-and-neck in the race for this year’s Best Local Pizza crown.

And then there are this year’s first-time, top-spot winners, both well-recognized names in the pizza world, though boasting vastly different business models. Frank’s is a 30-year-old neighborhood Italian restaurant specializing in pies, yes, but also meaty entrees, decadent pastas and stuffed strombolis, while River City Wood Fire is a mobile pizza company, receiving five out of five stars on Wedding Wire for its impressive catering services.

Frank’s chef Giuseppe Carollo, son of Sicilian-born restaurant founders Frank and Elizabeth),says it’s known for their thin crust, New York-style pizza. “My dad got his start in Manhattan and Brooklyn – that’s what we are built on.” This past December, though, Carollo says he started experimenting with Detroit-style pies after doing some intense research and crowdsourcing opinions from his friends in the industry.

“I’m very hands-on, I make the dough the night before and come in early to start prepping,” Carollo says. Thursday night is now Detroit pizza night at Frank’s, and since it started Carollo says it almost always sells out. ”Once I got the recipe down I ordered 12 pans for the first night and they went so quick. … I ended up ordering another 40 pans,” Carollo says. “I didn’t expect for it to take off like it did, it really has become a huge hit.” 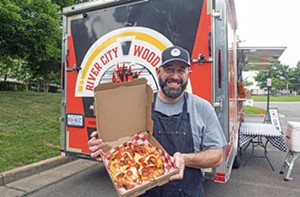 If you’d rather take your pie on the fly, you can check out River City’s online calendar to see where it’ll pop up next with classic and inventive pizzas – think Peppa Jelly Pig with Latin spiced, smoked pork belly, house-made pepper jelly, brie, Parmesan, mozzarella, pickled Granny Smith apples and scallions.