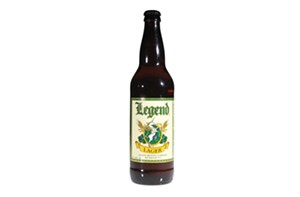 As it approaches its 20th anniversary, Legend Brewing Co. has gained stature as the granddaddy of the city's ongoing craft beer renaissance. Founded in 1994, the company has brewed and distributed some of Richmond's favorite beers, and its restaurant in Manchester remains a perfect perch to drink while watching the sun go down against the city skyline.

With the wisdom of two decades of brewing under its belt, what is Legend's secret to longevity? "Perseverance," owner and founder Tom Martin says. "That and making the best possible beer we can."

In honor of the anniversary, the brewery is releasing its Urban Legends series of beers, connecting Richmond's urban myths with batches of the bubbly stuff. The Guardian Dog Dopplebock and Lost City Saison already have hit the streets, with the 231 Lager and Imperial Vampire Red Ale scheduled for July and October.