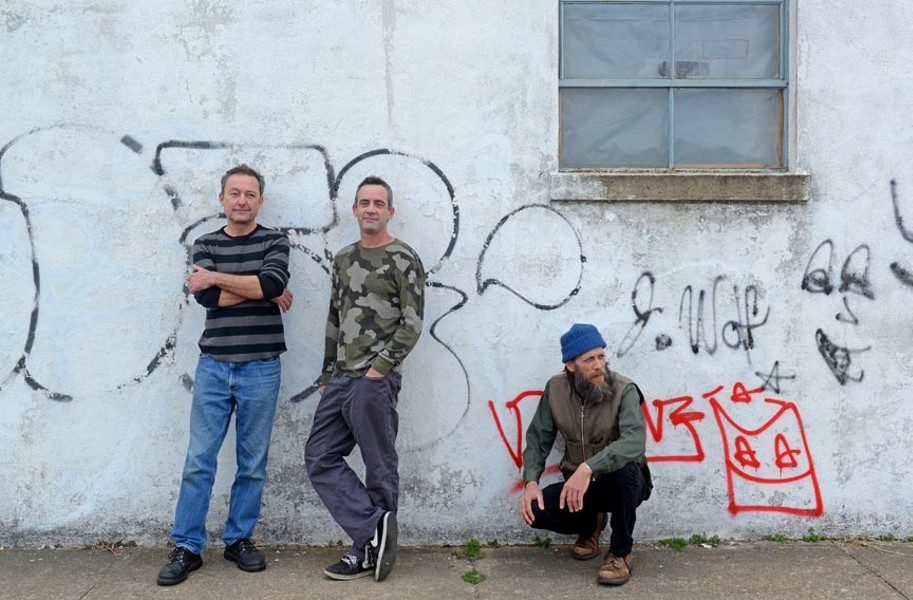 Something about a window seat at the Village Café still screams old school. Especially when you’re sitting with three near-giddy members from one of Richmond’s best instrumental rock groups of the ’90s, King Sour.

Did I just say that the ’90s was old school? Time has a way of making fools of all of us.

Of course, two hours ago is considered by some to be old school already. So imagine if you will, digital children, a prehistoric time when there were no cellphones and little broadband access. When dinosaur bands were smelly and roamed the earth without GPS and Facebook event listings, contemplating veggie sour cream.

It’s been nearly 20 years since they’ve performed together, but the musicians behind King Sour, known for their pummeling grooves and dynamic, angular riffs that stopped and turned on a dime, have been practicing for a much-anticipated reunion at Hardywood Park Craft Brewery.

The three are Austin Fitch on guitar, Thomas Peloso on bass — also a member of the famous group Modest Mouse — and Matt Boyle rocking the small drum kit. They were near telepathic in their heyday and it’s clear by the joking and grins that they’re happy to be together again.

Back then the band often was described as “math rock” because of its precision and fluidity between time signatures. It’s a dated term that doesn’t bother them much because, for that period, Gwar and instrumental rock from Richmond — such as Alter Natives, Breadwinner, Hoi’ Polloi and King Sour — were the main things the country knew about Richmond, musically speaking.

“Our music, there’s nothing you just can’t groove to,” Boyle says. “You could almost dance to our music. The math wasn’t a major element.”

Fitch adds that the band always had a sense of humor, as evidenced in its song titles. “They’re all goofball,” he says. “We were never pretentious about it with titles like ‘Crapspasm’ and ‘Shitbox.’”

The band started out with a lead singer who never showed up to practice, so the songs slowly began to morph into instrumentals that might sound best set to classic movie car chases. Their name was inspired by a vegetarian sour cream mix. Originally it was going to be King Sour and the Nutcuffs, but the would-be Nutcuffs nixed that idea.

One of their biggest supporters early on was the late Dave Brockie from Gwar, Fitch says, who opened his book of tour connections to help King Sour schedule its first national tours. “Dave was like, ‘Make sure you drop my name, tell ’em I said you’re good,” he recalls in full Brockie bellow.

The band released two albums, “Nipple” and “Instrumentally Retarded,” and did two American tours and one of Canada. After Peloso left to tour internationally with Modest Mouse, both Fitch and Boyle were in local bands, including Smalltown Superstar and Grass Panther, though Boyle had to stop for five years because of a tinnitus problem that he says is now under control. So they’ve all stayed active with music.

The biggest challenge to a reunion has been age, families and scheduling conflicts, but everything finally aligned with Peloso having some time off from touring.

Because King Sour also was one of the last of the pre-Internet bands, it’s difficult to find much about it online. Peloso says that’s part of the appeal of a reunion: They’re trying to launch their Web presence, sparked by interest from Glacial Pace, the label of his Modest Mouse bandmate Isaac Brock.

Fitch adds that he has lots of original King Sour 7-inches left over. “We’d like folks to be able to download anything they want, and maybe even sell some of the 900 of the 7-inches I have.”

There’s only one show planned so far; the band will have had roughly three days of practice over the last few weeks, their instruments tuned to E flat with tube amps cranked up, the key Sour ingredient. Fitch mentions members would like to play another show with their Philly brethren, Stinking Lizaveta, at Gallery5 if possible.

So what did they miss the most? “Being in that zone of the power trio,” Peloso says. “It’s a different kind of pocket than playing with Modest Mouse or Hackensaw Boys. I get to just play bass. It’s so fun.”

“Just playing really fucking loud,” Fitch adds, smiling. “It’s like Christmas for grown-ups. I knew I kept all those fliers for a reason.” S