Every Friday night, former NFL trainer Geoff Higgs is saving kids from themselves on the gridiron. 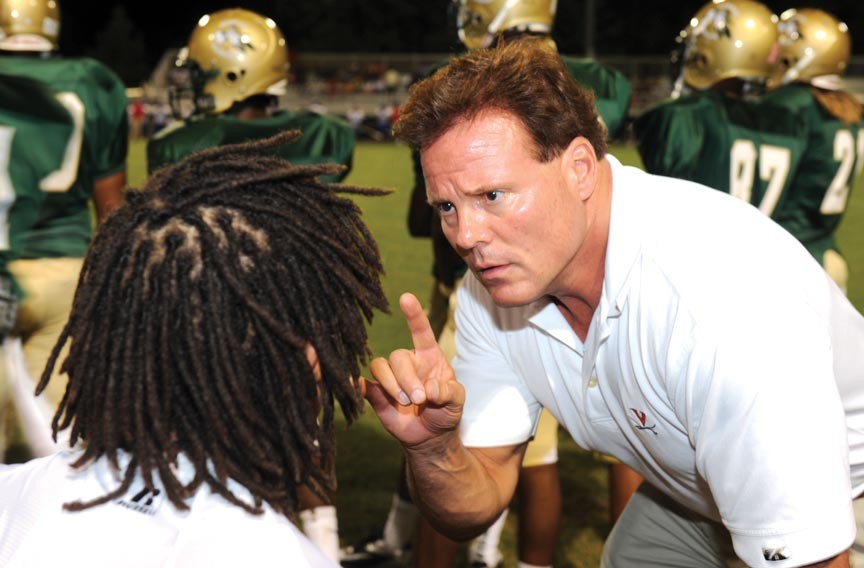 The state championship doesn't come through Chappell Stadium. Under the Friday night lights, the home of the Henrico High Warriors is rocking nonetheless. The monotonous drone of stock car engines at nearby Richmond International Raceway fills the air. Pompoms fly and feet stomp while trombones and trumpets carve out a section of the bleachers.

Dr. Geoff Higgs, an orthopedic surgeon, could still be treating the best athletes in the world. He's a former team physician for the New England Patriots and the Boston Bruins, and has made the rounds in the biggest stadiums of professional sports. He was chief of physicians at Yankee Stadium and Madison Square Garden, home of the New York Knicks and Rangers.

Higgs chose more time with his family over the extended trips required in pro sports. Still, he couldn't shake the bug. So he's here, at Henrico High School off Azalea Avenue, an economically stressed section of the county where football isn't exactly king. The Warriors are a perennially average football team — last year they went 5-6, which was a good year — in an economically depressed section of the county where basketball is far more socially relevant. Last year, the boys varsity team went 28-3 and finished the season ranked 16th in the state.

Higgs has roamed the sidelines at Henrico for 12 years. He's seen every kind of sports injury imaginable. He's counseled parents on their son's future in the game after torn knee ligaments, broken legs and dislocated shoulders — and, of course, concussions. But it isn't enough to treat injuries in his office, at Advanced Orthopaedics in the West End.

The real work begins on the field.

"In the heat of the game you can't trust the judgment of a 17-year-old boy," Higgs says. Especially a boy who grew up on ESPN and today's NFL, where jarring blows and brain-smashing hits are rewarded with top billing on the highlight reel. The NFL has recently imposed new rules and increased penalties for blows to the head, sparked in part by hundreds of lawsuits filed by former players now suffering from concussion-related dementia. But the violent culture of the game isn't easy to change.

"It's not uncommon even now for a player to get his, quote, bell rung, and have an altered sensorium and try to hide it from the trainer, or the doctor," Higgs says. "So we are on our kids. We tell them, 'If you get hit in the head and you hear bell ringing or you feel funny, or you got a headache, you have to tell the trainer."

In Henrico's first game of the season, against Caroline County, Higgs will see close to a dozen athletes on the field and in the training room. On his second play of the night, place kicker Nishil Thakkar was, as he says, "admiring his kickoff" when he was hit by a blocker and fell to the ground. The second time he was hit while on the ground he felt a pop in his shoulder. Jogging off the field, he immediately went to the medical staff.

Being the captain of the soccer team and having had an injury before, Thakkar knew the look on the face of head athletic trainer Rob Welch's wasn't good. Higgs went over to provide a second look and they decided to take him back to the trainer's room. Higgs popped the shoulder back into place and delivered the news: Thakkar wouldn't be able to play with his travel soccer team that weekend.

Just a few minutes later Breon Melvin, a defensive end, was watching the play develop in front of him when a player from the opposing team turned the corner. As Melvin looked up field he was hit by an opposing blocker and Caroline went on to score. After the play Melvin trotted to the sideline. He couldn't recall what had just happened.

It was at that moment Welch took him through the Maddocks assessment test, a simple five-question quiz to establish his functioning. He was a little fuzzy during the test, but that he didn't recall the play meant he had to sit out the remainder of the game.

This is a sea change, Higgs says. Five years ago, players were less likely to tell trainers about ringing bells, but with increased education and community awareness the players are keeping the trainers better informed. The first concussion isn't typically the one that causes permanent damage. It's the second hit after the player re-enters the game prematurely, which can be catastrophic.

Still, Higgs says the game, and the injuries, are manageable. And he preaches its virtues, which requires laserlike focus and an adherence to the team that you can't find in other sports. "I suppose you have to compare it to other risks in life," Higgs says. "What's the risk of a kid in this environment not being on the football field? Him being distracted by kids who are bad influences?"

Coaches can have a steadying influence on players who come from troubled homes, Higgs says. Still, he doesn't see it as his job to sell the game.

"Philosophically, it's not my job to make the decision for the parent about whether or not their kid should be playing a collision sport like football," Higgs says. "Where I get involved is where there is a medical risk associated with the athlete playing. … If a kid's had a prior head injury for example, or he's had two."

In his capacity he's counseled some players to quit the game they love for fear of permanent damage. He's told others they should stay away from playing football altogether because of pre-existing conditions. When it comes to calls in the game about whether a player may return, the ultimate decision comes down to Higgs and Welch, who have worked together for the last six years.

Higgs' policy is that all players are seen within 24 hours of an injury. Maybe it's his love of the game or maybe it was the mentor he had at Columbia University who was world-renowned as a shoulder surgeon, but made time to work the sidelines "at his hometown high-school football game every Friday."

Higgs' commitment to being at the games is unwavering. After he met his girlfriend in Charlotte, N.C., she decided to move to Richmond to spend time with him. Their first date was a Henrico football game. Higgs recalls grabbing a protein drink and an apple before turning to her. "Welcome to Fridays in the fall," he said, before they headed out the door on their way to Chappell Stadium. S