Believing in Bluffington: Richmond resonated through an earlier cartoon.

“The Cleveland Show” isn't the first time that Richmond has served as the setting for an animated sitcom. For about a decade, “Doug” entertained children as a part of the first lineup of cartoons commissioned by the TV channel Nickelodeon. The show, which later aired on ABC's Saturday morning lineup, was heavily influenced by creator Jim Jinkins' childhood in North Richmond. 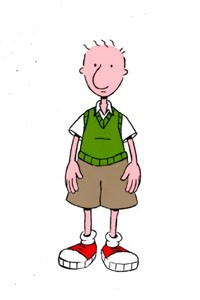 >Doug Funnie was a 12-year-old boy whose Walter Mittylike escapades highlighted the dreams and fears of most children. He was neither exceptional nor a loser, just a quiet daydreamer trying to solve everyday problems. The series began with the Funnie family moving to the fictional — and oddly familiar — town of Bluffington.

“Bluffington is definitely my exaggerated, cartoony version of my memory of Richmond,” Jinkins says. He grew up off of Parham Road in the Valentine Hills neighborhood and was surrounded with locations that would eventually inspire his cartoon. Doug's hangout, Four Leaf Clover Mall, was based on the then-new Cloverleaf Mall of Jinkins' adolescence, and Stinson's Pond was inspired by Talley's Pond in North Richmond. Ms. Wingo, Doug's teacher, was based upon the real life Marguerite Wingo, Jinkins' instructor at Maude Trevette Elementary School. The artist was able to find Wingo again before she died in 2002 and thank her for encouraging him as a child.

One of the show's quirks was its obsession with beets. The idea came straight from Richmond's history. “In Virginia, tobacco — shame on us — was the big money crop. Well, I just replaced tobacco with beets,” he says.

Today, Jinkins serves as president of Cartoon Pizza, an animation studio in New York that works on the cartoon, “Pinky Dinky Doo” and children's shows such as “PB&J Otter” and “Jojo's Circus.” But “Doug” still remains his most personal creation.

“I don't know if anything will come as absolutely close to a fractured memory of childhood as ‘Doug,’” he says. The show had a successful run on Nick, and later ABC, before its cancellation in 1999, the same year that a feature film, “Doug's 1st Movie,” was released.