Being There: VMFA Oct. 14, “An Evening in the Forbidden City”

Scott Elmquist The scene in the VMFA’s Cochrane Atrium for “An Evening in the Forbidden City” Oct. 14.

Virginia Museum of Fine Arts director Alex Nyerges calls it "the most important traveling exhibition" in the museum's "nearly 80 year history." On Tuesday evening, Oct. 14 a galaxy of the state's cultural business and political leaders gathered on the Boulevard for "An Evening in the Forbidden City," a black tie preview and dinner gala to kick off "Imperial Treasures from the Palace Museum, Beijing." The Chinese museum, which was once closed to all but a few, now welcomes 15 million visitors annually. Visitors to the VMFA exhibition get an eye-popping sampling of the collection -- large portraits, costumes, furniture, religious sculptures and fine decorative pieces -- ranging from the 14th century Ming Dynasty to early 20th century pieces. The exhibition continues through Jan. 11 of next year.

A broad and long red carpet flanked with potted bamboo welcomed patrons as they entered the museum. Gathering in the expansive atrium, guests enjoyed refreshments. From the podium, Gov. Terry McAuliffe welcomed the elegantly turned out attendees and Ambassador of the People's Republic of China Chi Tiankai. Later, dignitaries and patrons repaired to the museum galleries for a seated dinner which featured lamb chops and a dessert of green tea and ginger sorbet.

Slideshow VMFA Oct. 14: "An Evening in the Forbidden City" 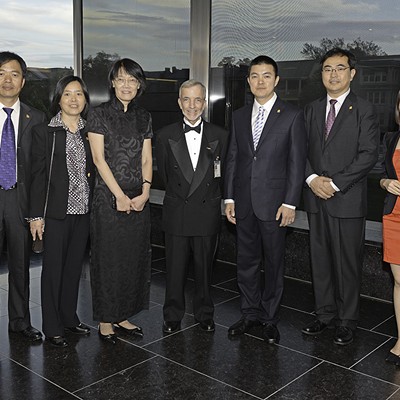 VMFA Oct. 14: "An Evening in the Forbidden City"
By Scott Elmquist
Click to View 17 slides