Being There: VCU's Institute for Contemporary Art Ground Breaking

Ash Daniel VCU School of the Arts dean Joe Seipel breaks ground on June 3 at the location of the university's Institute for Contemporary Art, which is scheduled to be completed in winter 2016.

Belvidere and West Broad has long been a frenetic crossroads. The old Elba and Ashland & Chesapeake railway stations were once nearby. Half a dozen city bus lines roll through regularly. And two federal highways and a pair of gas stations cater to motorists. But valet parking was a first for the neighborhood on Tuesday when Virginia Commonwealth University broke ground on its Institute for Contemporary Art, a highly-anticipated new exhibition and performance space.

Not since Philip Johnson was in town in 1968 for the dedication on Church Hill of his iconic WRVA station, now the ChildSavers building, has there been an American Institute of Architects gold-medal recipient overseeing a construction start. Steven Holl's design is expected to be a traffic stopper. The New York-based architect was all smiles as Lisa Freiman, the ICA director, approached the podium under a big white tent. She told the crowd of 300 civic and cultural leaders assembled that the building would be "the most important addition to the cultural landscape in this city in this century."

Holl's smile widened when Freiman announced that "more magic has happened under the tent" since the event got underway. She told the white wine-sipping and crab-cake-nibbling crowd that a $100,000 gift from the Martin Agency and a $400,000 gift from an anonymous donor brought total pledges to $31 million. The goal is $35 million for the 43,000 square foot complex scheduled to open in early 2016. 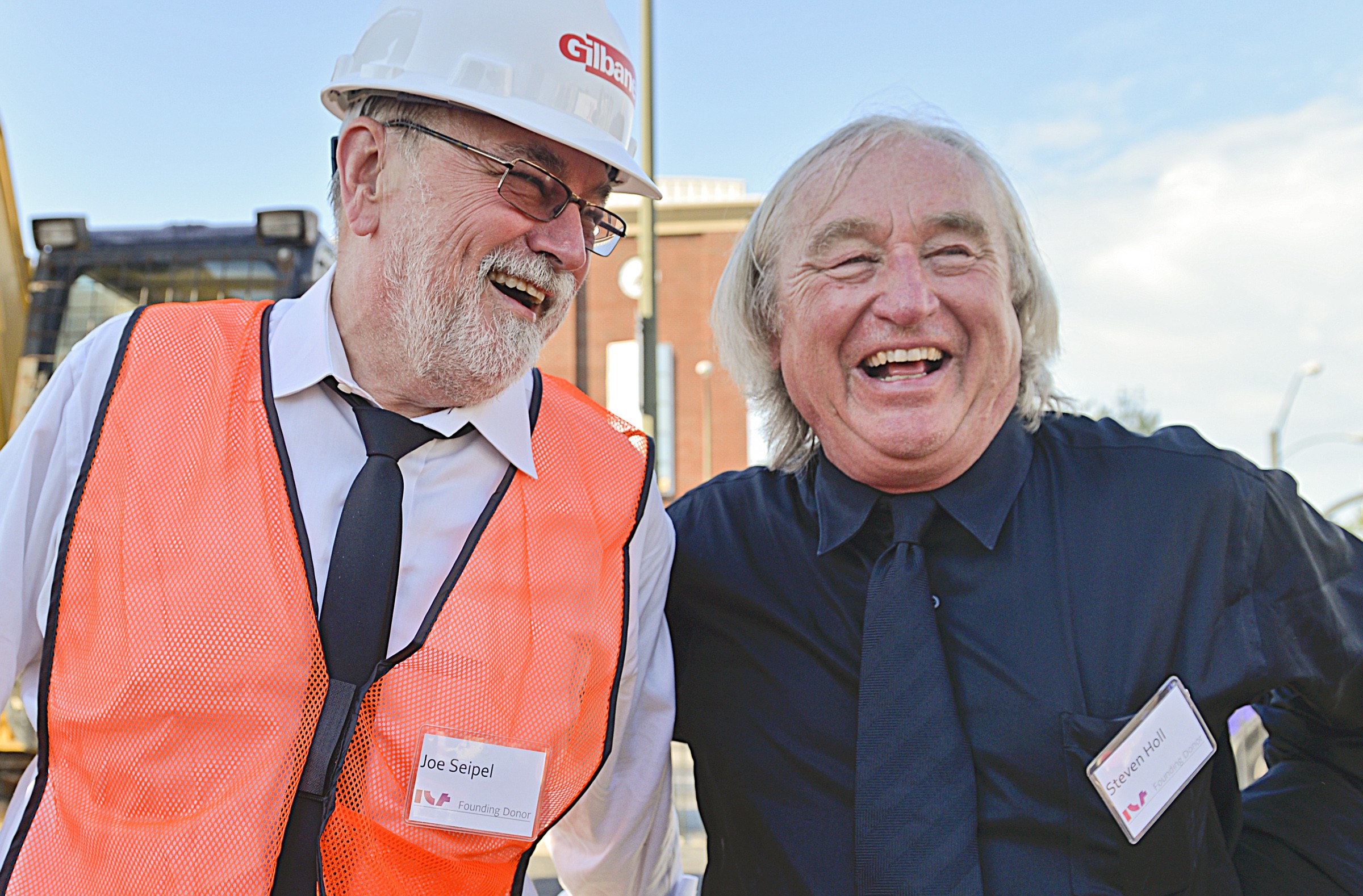 Michael Rao, VCU president, announced that because of the leadership and generosity of the Markel Corp. and its chairman, Steven Markel, and his wife, Kathie, the complex would be named the Markel Center. The Markels are co-chairs of the ICA capital campaign along with Bill Royall, VCU's vice rector, and his wife, Pamela.

Embarking on an entirely new cultural entity at this level of investment and involvement is rare in Richmond -- a once-in-a-life-time happening. And the significance wasn't lost on the those attending as they greeted one another with ebullience. Former United States Treasury Secretary John Snow, who, with his wife, is a benefactor of the ICA, greeted State Senator Henry Marsh with: "Henry, are you still having fun with politics?" Other ICA supporters spotted included Pam and Major Reynolds, Harry and Marcia Thalhimer, Tru Luck, James Ukrop, Abby Moore and Jim Klaus.

Bill Martin, director of the Valentine Richmond History Center; Ashley Kistler, director of the VCU School of the Arts' Anderson Gallery; Mary Jane Hogue of the Historic Richmond Foundation; Richard Waller, director of the University of Richmond Museums; Janine Bell of the Ezibu Muntu African Dance Company; and Phil Whiteway, managing director of Virginia Repertory Theatre, were indicative of the wide range of cultural leaders present. Bobby Gorman, a lead performer with Gwar, escaped the Slave Pit long enough to enjoy the festivities. Architects spotted in the crowd included Rob Comet and Patrick Farley. Watching quietly from the side was Beverly Reynolds, whose local gallery bears her name and who was credited throughout the proceedings as having long advocated for the ICA's establishment.

Moving from the tent to the actual ground breaking in the brilliant late-afternoon sunshine, guests witnessed motorized lifts raising Markel Corp. officials and other dignitaries 30 feet into the air. From their lofty perch, they poured paint down onto a circular stencil onto the former parking lot. When the stencil was peeled away, the rosy-to-purplish hues of the institute's logo emerged.

Finally, to great applause, VCU School of the Arts Dean Joe Seipel, donning a hard hat and safety vest, climbed onto a waiting backhoe and scooped out the ceremonial first chunk of pavement and earth to begin the scheduled 18-month construction project.

Pamela Royall, who collects contemporary art at a high level, asked Freiman: "Aren't we going to keep the logo?"

The answer was no. The ICA is, after all, a noncollecting fine arts institution.