Being There: The Market at 25th

After four years of planning, the Market at 25th opened April 29.

The 27,000-square-foot, full-service grocery store anchors a larger, mixed-use development in at 1000 N. 25th St. in North Church Hill that includes a 42-unit apartment building and a Virginia Commonwealth University health and wellness center. Another major building, the Kitchen at Reynolds, the future home for the culinary program of J. Sargeant Reynolds Community College, is scheduled for completion later this year.

On the evening of April 26, days prior to the opening, hundreds of organizers, employees, vendors, neighborhood residents, civic leaders and well-wishers packed the newly stocked grocery aisles to familiarize themselves with the layout, sample goods and hear from store officials about "the journey." 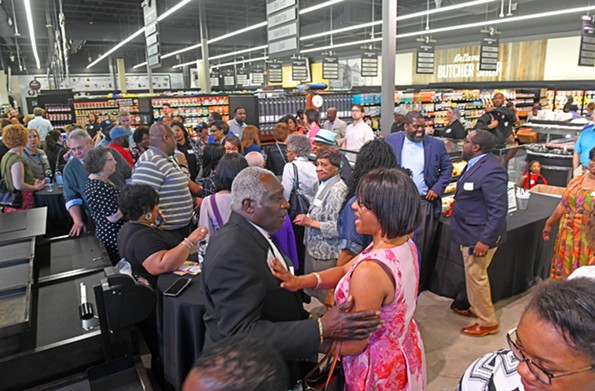 To stroll the aisles was akin to walking through the neighborhood. No, this wasn't due to familiar faces you might encounter, but because of signs positioned above the aisles. In addition to identifying the location of merchandise, information included names of neighborhood churches. In other spots throughout the store, the familiar school and neighborhoods names are woven into the graphic design: Armstrong, Chimborazo, Fairfield, George Mason and Woodville.

Stephen Markel, the vice chairman of Markel Corp., a Richmond-based insurance company, who with his wife, Kathie, is a major investor in the new store, welcomed the guests.  "We've done our best to stay in touch with the Church Hill community, to meet the needs of the community," he said. "This is more than a grocery store; this is part of a healthy community, a place where the entire community can come together."

Norm Gold, a veteran retailer and former executive of Feed More, who led day-to-day efforts to establish and build the new store, told the assembled: "We're a market with a mission." He stressed that among the dozens of local vendors were coffee from Brewer's Cafe and takeout from Mama J's restaurant. 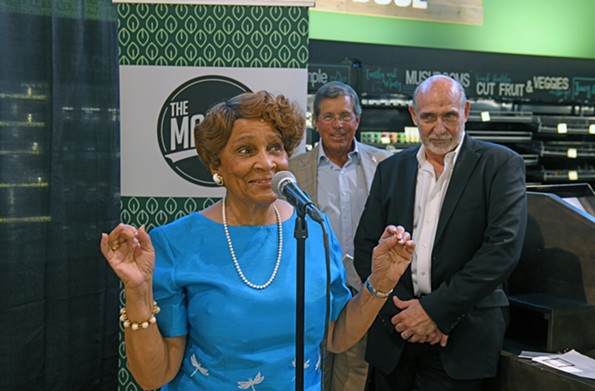 The store also has a pharmacy, a lounge for customers awaiting rides and transit arrangements with VanGo and Lyft. Courses in nutrition will be offered and a branch bank might be established.

"There was a time when there was no road map," Mike Maruca, who headed a neighborhood advisory group, told the crowd. "It's been a labor of love."