Local painters reveal a different side of Richmond Ballet dancers. 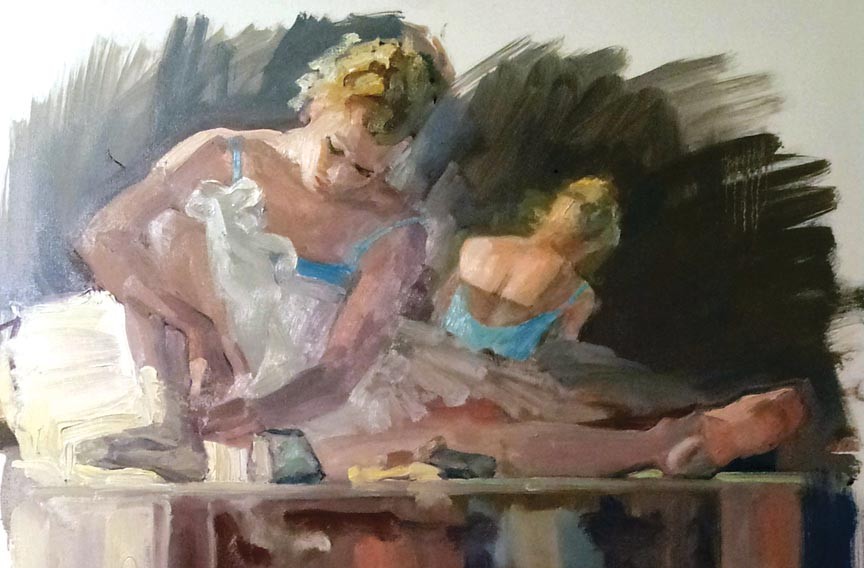 Anyone who saw the cover of Dance Magazine featuring Richmond Ballet dancer Maggie Small likely marvelled at the strength and beauty of her physique — the near-perfect definition of her muscles while she balanced on pointe in a contemporary pose.

But she's equally captivating showing grace at home, such as in a portrait where she sits on her couch stitching up her pointe shoes — one of roughly 40 pairs she'll go through in a year, which with those used by other dancers cost the ballet about $48,000.

Last spring a group of five Richmond artists called Hang 5 came up with an idea to paint the dancers of the ballet. They wanted to capture not only moments of graceful performance, but also glimpses of the dancers without costume or makeup.

The result is the intimate and prismatic "Assemblé," the first exhibition on display at Richmond Ballet's Studio Theatre.

A French dance term, assemblé refers to the coming-together of a dancer's shoes mid-leap. That idea of coming together is at the core of the exhibition, which runs through April 14. The Hang 5 — David Tanner, Loryn Brazier, Nancy Mauck, Beth Marchant and Tom Wise — are respected representational artists in their own right, but this is their first show as a group. Working with different ballerinas, the painters bring distinct points of view.

Tanner, a figure painter who won the American Artist magazine's prestigious self-portrait competition last year, likens it to assigning a group of students the same homework. "The experience filtered through our personalities," he says.

The painters began their work behind the curtain of a series of Richmond Ballet rehearsals, taking photograph after photograph and sketching quick, crude glimmers of inspiration. "Something just happens to hit you," Mauck says.

Their work quickly evolved according to their own obsessions. Tanner sought to depict the ballerinas within the composition of their everyday lives, painting Small and Thomas Garrett relaxing after rehearsal at home. Brazier, owner of the Brazier Gallery in the Fan, chased after the quality of dancing that inspired them to perform.

The artists all say they were met with immediate enthusiasm when they first approached the ballet. Launched at a private reception last Wednesday, the exhibition came to fit into the ballet's just-finished "Leap Week." Fifty percent of profits from the sale of the paintings will go to the ballet. Brett Bonda, its managing director, says he views "Assemblé" not only as an exhibition, but also an opportunity for storytelling.

"We can no longer rely on people saying: 'I love ballet. I'm going to come to its performances,'" Bonda says. "We have to use creative ways to get people to come. This is one of those creative ways." 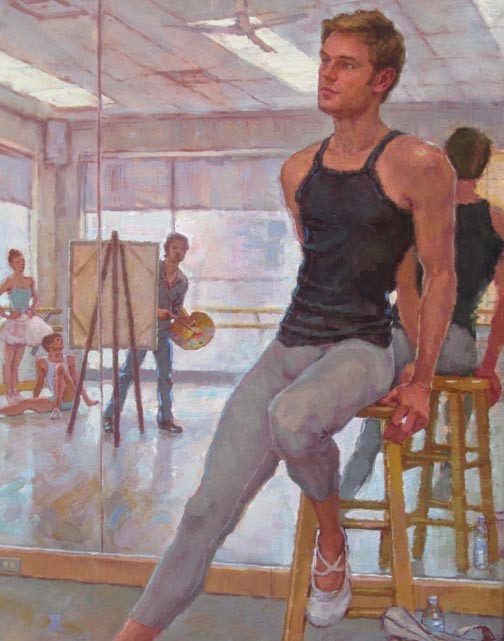 What enables this exhibition to succeed — and what distinguishes it from other, less authentic stabs at working across artistic communities — is that the ballet, the ballerinas and the painters all brought to the project the same spirit of collaboration.

Painter Tom Wise points to the enthusiasm of the ballerinas as central to the exhibition's integrity. "The ballet values being a part of the community," Wise says. "It's not a community that encourages prima donnas. Outreach is something the ballerinas want to do."

Ballet and painting trade in the same visual language, and the ballerinas and painters worked together — perfectionists both — to create a story told in the gestures.

"I told them what I wanted and I said, 'I want beauty,'" Brazier says.

Posing for the artists was like a standing-still version of what she does at the ballet, Small says. Tanner "captured a moment we have, but composed. Life adjusted." S

There will be a free open house of "Assemblé" on Saturday, March 30, at the Richmond Ballet Studio Theatre from 1-4 p.m.