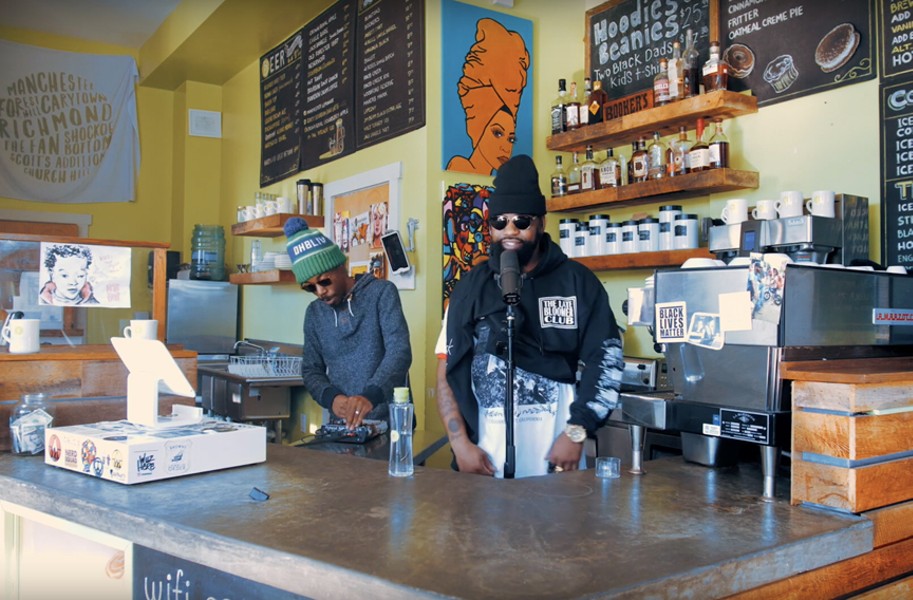 Prominent local hip-hop artists Ohbliv and Nickelus F perform during an episode of Brewer’s Sessions filmed behind the counter at Brewer’s Cafe in Manchester. You can subscribe to the YouTube channel or look for it on WCVE Music.

Something is brewing in Manchester. Ajay Brewer, proprietor of Brewer's Cafe and owner of the Well Art Gallery, is all about building community and supporting the culture of the city and the neighborhood he loves. He's already one of the busiest guys in town, and when not running a coffeehouse, preparing for the opening of a waffle shop or biking around Richmond with his son Parker, he's now doing what he can to support and promote local musicians.

Inspired by NPR's Tiny Desk series, which invites artists to record intimate concerts at the desk of "All Songs Considered" host Bob Boilen, he recently launched Brewer's Sessions. Collaborating with local NPR affiliate WCVE-FM (88.9), Brewer, along with a photographer, producer and graphic designer created the first four installments of the series.

Musicians set up behind the counter at Brewer's Cafe, sip on coffee or tea and perform while the cameras roll. With the shop's deep sinks, chalkboard menu, espresso machines and cash register serving as the backdrop for these little concerts, it's funky yet warm. He hopes it will fill a niche in Richmond's music scene.

"When I'm thinking about the life that I want, most people talk about the school their kids go to, the career they have, and completely forget about entertainment and the social scene," Brewer says. "I was kind of over not being accepted in certain circles, in certain restaurants, at certain clubs, so I just created my own vibe."

He has his own musical preferences, but decided early on that he needed more input than just his own. With the creation of an advisory board, he brought diverse faces, voices and opinions to the table, and he wants that diversity to be reflected in the final products.

"What I found was that Richmond's got a crazy independent scene with everything, rock, hip-hop, metal," Brewer says. "I found out so much about the history of music within Richmond, from artists that are really talented and really making a living off of their art."

Brewer hopes to start recording again this summer and release more sessions in the coming months, he says, with the goal being to eventually release a new video every week. Space in the cafe is extremely limited when overrun by artists and the production team, but if you're lucky you might score an invite to one in the future. For now, the event is private.

Like everything else he does, Brewer wants the concert series to embrace the local scene and expose Richmonders to culture they might not have come across.

"We thought about attracting major artists, but it just isn't even necessary," Brewer says. "We're going to highlight Richmond artists from every scene, every genre."

The videos are available at ideastations.org/brewers-sessions and on the Brewer's Sessions Instagram (@brewerssessions).