Behind the Ballot: Who Richmond Wants to Be the Next President

Digging into the nitty-gritty of Super Tuesday results to learn more about how you and your neighbors voted.

Richmond voters and their neighbors throughout Virginia, along with a dozen other states, had a chance to weigh in on party nominees March 1, otherwise known as Super Tuesday. Headlines in the aftermath could have credibly said that Hillary Clinton won the Democratic primary here, and Donald Trump won for the Republicans.

While there’s some logic to that — those candidates did capture a plurality of votes from Virginians, after all — the real prize in a nominating contest is delegates, and candidates scrape those up from a proportion of the total vote here in the commonwealth.

Modern political campaigns, especially on the national level, are built on data. The more a staff knows about which constituencies supported them, and which ones didn’t, the better placed they are to maximize their position in future nominating contests. And that’s not to mention what they learn about the campaign leading up to Nov. 8.

Methodology: Findings are based on analysis of unofficial, uncertified election results as reported by county registrars to the Virginia Department of Elections. Demographic data comes from the U.S. Census Bureau’s 2014 American Community Survey five-year estimates. 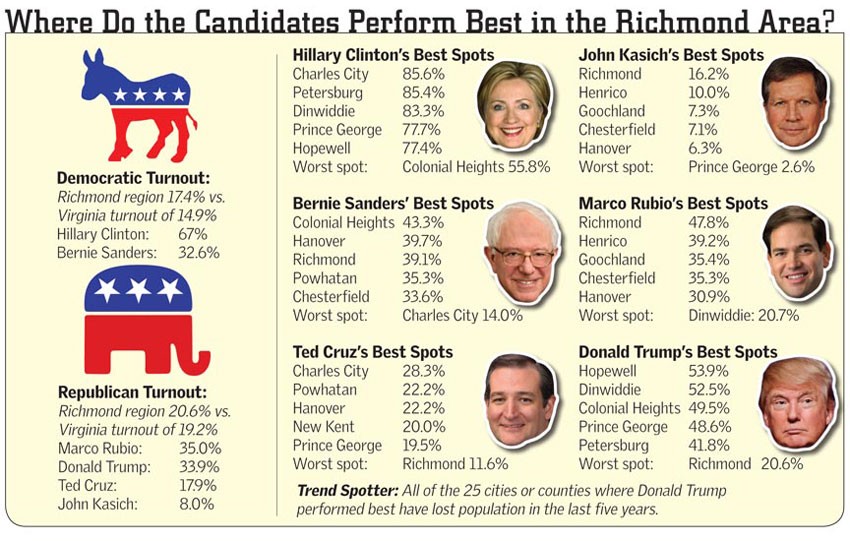 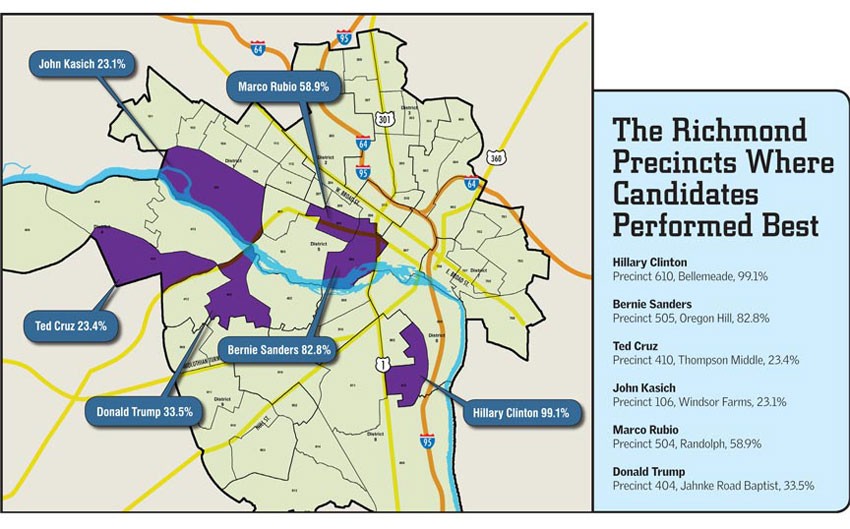 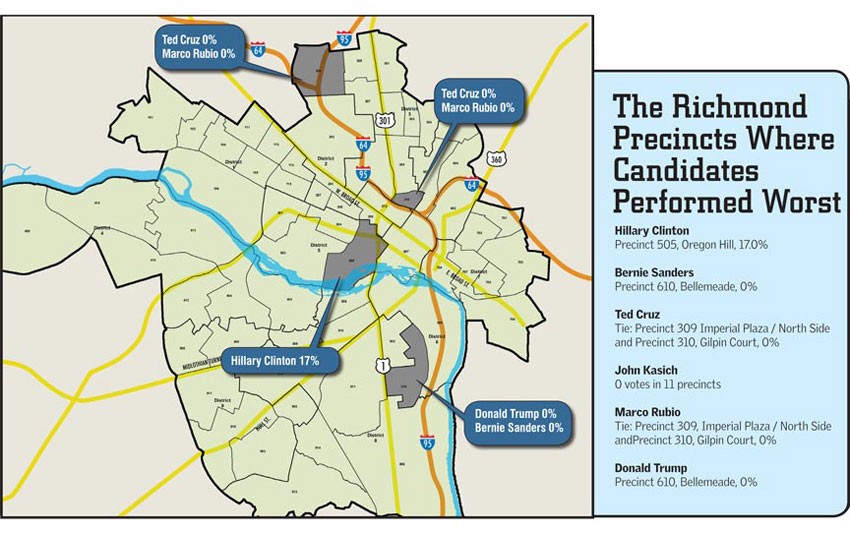 Most Popular Place to Vote
The Robious precinct in Chesterfield recorded more votes than any other in-person voting location in Virginia: a total of 2,212. There were 1,656 Republicans, of whom 48.2 percent voted for Marco Rubio, and 556 Democrats, of whom 63.5 percent chose Hillary Clinton.

Least Popular Place to Vote
The loneliest polling location was Paint Bank, in a remote valley of Craig County. There, 21 ballots were cast with a plurality preferring Hillary Clinton.

Protest Vote?
The precinct at the Chrysler Museum in Norfolk recorded more votes for officially eliminated candidates than any other. There, 104, or 21 percent of the precinct’s total GOP votes, were cast for those who had already removed themselves from the race.

Interactive Map: Find Out How Your Neighborhood Voted

Seeking Liberty
While evangelical Liberty University’s president, Jerry Falwell Jr., made waves by strongly endorsing Donald Trump, the results at the Lynchburg’s second precinct in the 3rd Ward, on the university’s campus, suggest that students aren’t convinced. The few Democratic primary votes cast, 39, gave Bernie Sanders his best precinct result in Virginia, with 89.7 percent of voters balloting for him. Of the 1,176 Republican votes cast, most went to Marco Rubio, 43.6 percent. As for Trump? A scant 7.7 percent.

All In
At two precincts, 100 percent of a small number of Democratic votes went to Hillary Clinton — Fairview in Scott County and Wakefield in Sussex County. In Richmond’s South Side, all but two of the 318 Democratic voters at the Bellemeade Community Center cast their ballots for her.

Democratic Volume
More Democratic votes were cast in the primary at Henrico County’s Rolfe Middle School precinct in the near East End than anywhere else in Virginia. The 1,692 Democratic ballots went 67.7 percent to Hillary Clinton.

Gilmore’s Glitch
While early preliminary totals suggested that former Virginia Gov. Jim Gilmore may have won 52 percent of the vote at the Hurt precinct in Pittsylvania County, a call to the registrar confirmed that it was a clerical error in transmission to the Department of Elections and that the votes were intended for Donald Trump.

O’Malley Love
Voters at Henrico County’s Spottswood precinct in the West End cast a Virginia-high 69 ballots for Martin O’Malley, for 34.9 percent of the total. The other 129 Democratic ballots went to Hillary Clinton. None for Bernie.

Trump Territory
While Donald Trump won a majority of the Republican votes in 25 different counties, the sum total 39,286 votes he earned in all those counties just barely eclipses his 33,064 votes from Fairfax County — No. 123 of 133 in Trump voting percentage.

Gone But Not Forgotten
Candidates who had officially dropped out of the race racked up 15,824 ballots throughout Virginia — 0.9 percent of all total votes. Of those, 11,800 were for a litany of Republican candidates who didn’t make it to March 1. Petersburg residents voted for withdrawn candidates at a higher rate than any others — 3.5 percent of the GOP vote.

Feeling the Bern
Bernie Sanders’ candidacy evidently attracted a wave of college-student votes. Precincts on or very near university campuses routinely reported 70 percent or better for the senator. But his best county-level result was from rural countercultural haven Floyd, where 935 Democratic voters — 70 percent of the total — selected him. Don’t overestimate Floyd’s leftiness from that result, though. It’s still Southwest Virginia, and 44 percent more GOP ballots than Democrat ballots were cast. Those voters preferred Trump.

The Bottom Line
How many votes each candidate had to earn per delegate awarded.