I’m standing on the bow of a sunken cruise liner, blue light filtering down from the waves above. Around me, schools of fish swim in tight-knit clouds, avoiding a manta ray that drifts overhead. Suddenly, an enormous shadow cruises out of the hazy distance.

It’s a blue whale that stops just a few feet from my underwater perch, sizing me up with an eye the size of a football. I feel absolutely dwarfed by its presence. Nonplussed by this tiny human, it swims on, its fins and tail coming within mere inches of my head. I feel like I could reach out and touch them.

A voice breaks through, barely audible above the press of the ocean currents: “Do you want to try the abyss next, or something else?”

If the deep, deep ocean is anything like what I just experienced, then I don’t want to see what’s waiting for me down there.

Of course, I’m not actually standing on a shipwreck in the Pacific. I’m in the game room of Garden Grove Brewery in Carytown with a pair of virtual-reality goggles strapped to my face. But until Nick Rhoden, the enthusiast who’s running the demo, speaks to me, I’ve forgotten all about my surroundings.

Rhoden was kind enough to bring his pricy computer setup to Carytown for a public demonstration. It’s a local introduction to a new facet of an old technology, an encounter that’s somewhat difficult to explain if you’ve never experienced it.

You might have seen virtual reality in the news recently. The technology has grown sophisticated — and cheap enough — in the last few years to make a new consumer-oriented version possible. The concept and crude implementations have been around since at least the 1950s. I tried a large, unwieldy visor at Kings Dominion in the late 1990s. But that rudimentary experience — shooting balls at colored shapes hanging in black space — was nothing like what you’ll find in today’s generation of headsets. 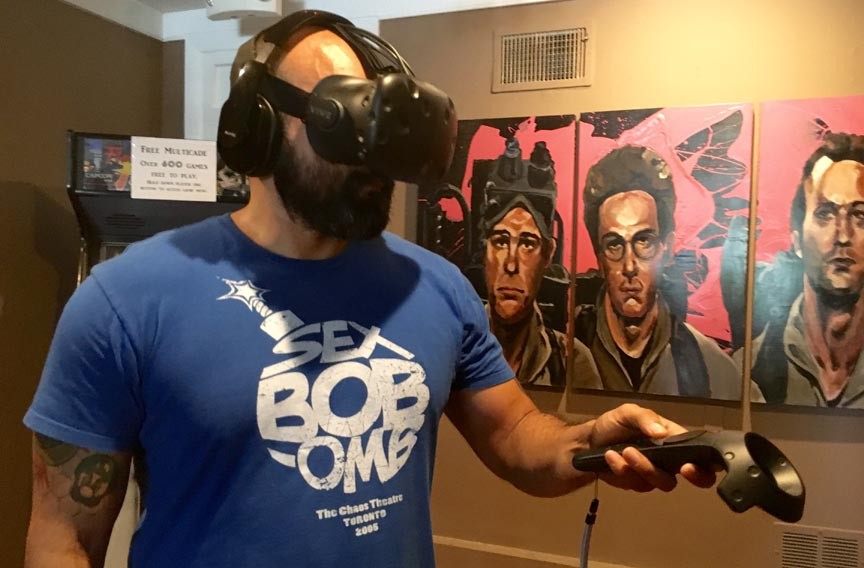 What Rhoden is demoing today is the HTC Vive, one of the more advanced and expensive headsets available. Aside from the goggles, which are about the size of a thick paperback novel, the Vive uses two infrared laser cameras for positional tracking and two scepterlike controllers held in each hand. There are triggers and a touchpad to register your fingers’ motions to interact with elements in the VR space.

This particular headset costs $800 and requires an enthusiast-level gaming computer to run the experiences offered. There also are other options available from the Facebook-backed Oculus Rift, as well as upcoming headsets from both Sony and Microsoft.

Rhoden’s voice breaks in again through my headphones. “I’m going to drop you into the archery demo now,” he says.

I’m whisked from under the ocean to a platform orbiting somewhere above the Earth while the next experience loads, but the transition somehow seems natural. In a few seconds, I’m staring down at a toy box in a playroom that contains a building-block castle. On a parapet overlooking a courtyard, I can see a miniature representation of myself and a horde of bouncing stick-figure barbarians.

By clicking on my little avatar, I’m transformed into a toy-sized defender, complete with a bow and arrow in my hands. The goal of this game is to keep the invaders below from breaching your castle by shooting them with arrows.

The tracking here is beyond impressive, with each turn of my head and arms represented one-to-one. It’s even possible to walk around to get a better sniping position and I send flaming arrows at a barrel of gunpowder by the castle door. Stick-figure knights go flying, but it’s not long before I’m overwhelmed and the game is over. I’m starting to work up a sweat. It may be a virtual landscape, but all of the movements are real. It’s a far cry from the controller and couches of traditional gaming.

For the last demo — the ominous-sounding “Brookhaven Experiment” — I’m placed in the middle of a park surrounded by dark office buildings. Some of them are on fire. Not good. I have a pistol in one hand, a flashlight in the other and a scattering of survival supplies at my feet. Something bad has gone down here. After firing my gun to signify that I’m ready to start the game, a silence settles in. But off in the distance, I can hear the gurgling sounds of something creeping closer.

Whirling around with my flashlight, I see pink skinless humanoid creatures lurching out of the ash-filled darkness. I have to shoot them before they get too close, being sure to aim accurately to avoid wasting ammunition, and fumbling to reload when the zombies get too close. My demo ends with an enormous shape shuffling between two skyscrapers — some sort of zombie Godzilla.

I manage to make it two rounds, but it’s all a bit intense. Because it’s such an immersive experience, you feel like you’re genuinely under attack. I don’t recommend that demo for the faint of heart.

Blue whales, archery and zombies — that’s a lot of activity to pack into 10 minutes, but I have a blast with the demo. Overall the experience is fairly seamless. You put on the goggles and feel like you’ve stepped into an entirely new environment. Coupled with headphones, it’s genuinely easy to forget that you’re sitting in a crowded brewery surrounded by strangers watching you whirl around, convinced that you’re petting imaginary sea life.

For now, the price and computer requirements likely are keeping virtual reality from being anything more than an enthusiasts’ hobby, but to a lifelong gamer this feels like a generational leap in technology. This is the next big thing.

I’m convinced that as the components get cheaper and more palatable, we’ll start to really see this type of experience take off. In the meantime, I’m trying my hardest to talk myself out of plunking down nearly $1,000 for a headset of my own. S