At VMFA, a timeless egg collection can be seen like never before. 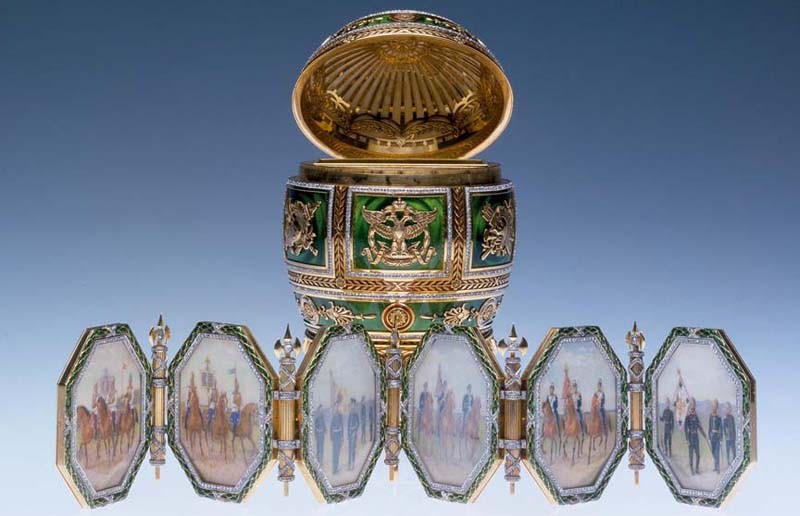 Get your Fabergé fix now,” advises Virginia Museum of Fine Arts director Alex Nyerges on the exhibition that opens July 9.

Of the museum’s holdings of more than 20,000 works of art from almost every major world culture, the Lillian Thomas Pratt collection of 150 objects by Peter Carl Fabergé and other Russian workshops — received as a bequest in 1947 — ranks as a jewel in the crown. But just as a 2010 Tiffany exhibit demonstrated that Louis Comfort Tiffany was bigger than stained glass, so “Fabergé Revealed” will demonstrate his shop was bigger than the museum’s vaunted collection.

“Fabergé is as much about legend as about art,” Nyerges says. “Fabergé brings to mind the Romanoffs and Anastasia. But the show also brings a sense of how Fabergé has been collected over the past 75 years and maintained its popularity throughout that time.”

Visitors will see more than 500 objects from four important private holdings. This includes the Matilda Geddings Gray collection of Louisiana, which is loaning the “Napoleonic Egg” and the “Imperial Lilies of the Valley Basket” — works that guest curator Geza von Habsburg says “stood on the czarina’s desk.” More than 20 noteworthy loans from the Arthur and Dorothy McFerrin Foundation collection include the “Nobel Ice Egg” and the “Empress Josephine Tiara.” And a complementary exhibition from the collection of the family of Virginia-born Daniel Hodges brings more than 100 pieces, including the “Bismarck Box” and the “Coiled Serpent Paperweight.”

These loans are significant because, as von Habsburg says, “Mrs. Pratt’s collection is focused on very specific areas. In addition to the five imperial Easter eggs, there are numerous miniature egg pendants, cane handles, frames, icons, flowers — but certain aspects of Fabergé’s art are not covered by her collection. That’s why I decided, for this exhibition [as for the museum’s 1996 Fabergé show], to request loans from friends and institutions located not too far from Richmond — in Louisiana, Tennessee and Texas. The Dr. Hodges family collection illustrates what can still be acquired today by a passionate collector who does not have unlimited resources. He has only one imperial presentation box, for example, compared to about 10 in the McFerrin collection.” Such boxes made by Fabergé were presented by the czar to visiting potentates and other dignitaries.

“A lot of the Hodges collection is devoted to things other than those produced for the Russian imperial court,” von Habsburg says — “objects that have remained relatively affordable today, such as smoking accessories, paper knives, stamp moisteners and ladies’ accessories such as lipstick cases and fans.”

Richmond is home to five of the 13 Russian imperial Easter eggs in the United States. “Creating the eggs with the tools that they had, by hand, and making it look as though it was just some miracle that had occurred, is actually an enormous feat of technology,” writes Lynette Proler, an expert on the Russian jeweler. “Fabergé used an extraordinarily complicated enameling process, a technique that cannot be duplicated, even today.”

The museum’s affiliation with the House of Fabergé will continue after this exhibit’s run. New space has been freed for a permanent display, to be ready by late 2013. It will be the last of the major installations since the museum’s reopening in May 2010, made possible with the removal of a kitchen in the museum’s south wing.

The Fabergé space will close for 18 months to two years following the exhibition, Nyerges says, making way for construction on three new gallery spaces devoted to the permanent items. “We’ve only ever been able to display half of our Fabergé collection,” he says. “And, of course, visitors have never been able to walk around the five imperial Easter eggs in our permanent collection the way they’ll be able to do with this exhibition — and in the new gallery space to come.”

“Fabergé Revealed” opens July 9 and runs through Oct. 2 at the Virginia Museum of Fine Arts, 200 N. Boulevard. $15 admission or free to museum members. For details visit vmfa.museum/exhibitions or call 340-1400.