The future of health care may be in Richmond’s backyard, with veterans leading the way. 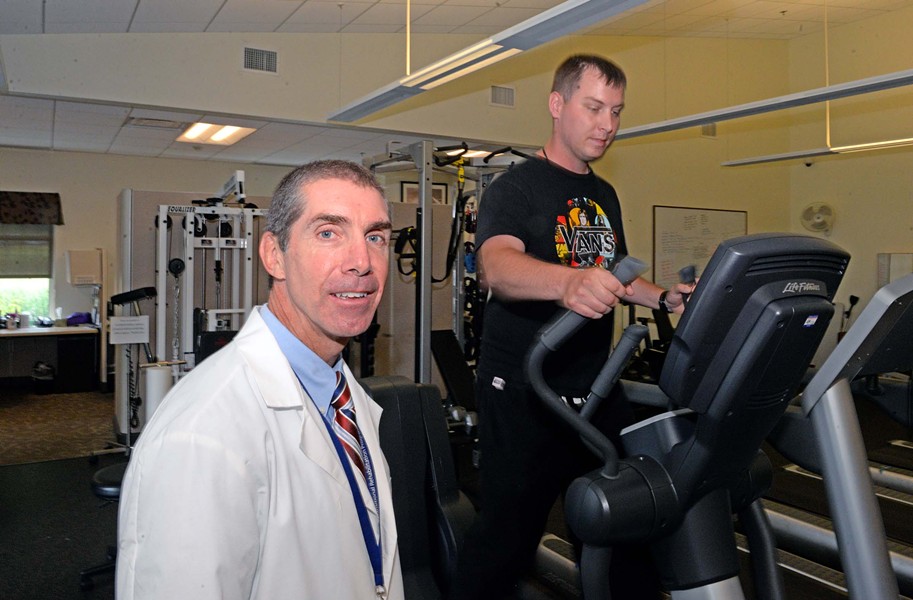 Scott Elmquist At the McGuire Veterans Affairs Medical Center in Richmond, Dr. Joseph Webster is part of a team that works with polytrauma patients from across the United States. Pictured with patient Christopher Eagal.

Upon entering the McGuire Veterans Affairs Medical Center, you’re met with a large sign: “The price of freedom is visible here.”

Veterans of all ages swarm the front area of the sprawling complex in the South Side. Many of them require assistance with mobility. Some are missing limbs. One vet, lying on his belly, rolls by on a self-propelled stretcher.

The hospital offers some of the country’s most advanced rehabilitation treatments. It’s big on holistic medicine, emerging technology and deep friendship. And staff members say that what happens at McGuire gradually will reach the masses.

It could be that McGuire offers a peek at the future of health care.

Some local doctors say they’re enthusiastic about that future, especially in the wake of the Supreme Court’s ruling in favor of the Affordable Care Act two weeks ago.

“Everybody should have access to this,” says Dr. David X. Cifu, who works in rehabilitation at McGuire and serves as chair of Virginia Commonwealth University’s department of physical medicine and rehabilitation. “Our program is rockin’, it kicks butt, and it’s the right thing to do for America’s heroes.”

Cifu is a nationally recognized expert on polytrauma, the signature injury of wars fought in Iraq and Afghanistan. He’s responsible for McGuire getting dibs on cutting-edge programs, and helped build America’s VA health care system.

Polytrauma victims suffer from a mix of cognitive, emotional and physical injuries. According to McGuire doctors, standardized health care remains myopically fixated on symptoms, while holistic medicine focuses on people and their personalities.

“We’re like a quarterback, organizing a bunch of moving parts,” says Dr. Ajit Pai, physical medicine and rehabilitation chief at McGuire. “But it’s not like what you see on TV — doctors with clipboards and terse chitchat.”

Typical treatment for polytrauma victims is a buffet of painkillers and pills. But McGuire takes the view that it also should help vets re-enter society to do what they love.

“The important thing to remember is that these are human beings,” says Dr. Ronald Tower, who directs the residential polytrauma center. “You want to get them back out into the world.”

Some vets appear to be fine, Tower says. They can move around without help. But then you ask them how many quarters are in a dollar — and they draw a blank.

“Restoring consciousness is such a strange thing, I mean, how do you really define that,” muses Tower, walking around the residential center. It’s filled with ambient light, not a fluorescent glow. In a state-of-the-art gym completed this winter, a veteran in a harness listens to directions. He’s learning to use his legs again.

Doctors at McGuire say it’s unheard-of for regular hospitals to guide polytrauma patients from hospital bed to rehab to residency to home. It’s an progression ripe for research, and doctors say that will benefit the general public.

As an example, they say, the endgame for stroke victims is similar for polytrauma victims: seeking to progressively recover from a shock to the body and mind. When polytrauma victims benefit from McGuire’s approach, doctors say it outlines potential relief for other cognitive conditions.

Tower observes vets practicing yoga or trying out therapy in a pool. Some close their eyes and follow a guided-imagery program. The idea is to bring the mind back into sync with the body, using techniques that an earlier generation might have referred to as hocus-pocus.

Some of those vets walk to the other side of McGuire where the transitional building is located. The residential program offers the final piece of the puzzle: vocational rehab. It’s like being a guest in someone’s cozy cottage. There’s a living room and a laundry room. There’s a stocked kitchen, too, and the faint smell of cooked food.

Dr. Joseph Webster walks past a row of decorative plants. “There’s a pretty good variety of dishes made here,” he says, smiling.

“This part is about vets taking control of the situation,” he says. “They make their own appointments, take on internships, and develop close relationships with staff.”

There are 20 beds, and residents are on average in their mid-20s. They’re allowed to stay as long as needed. The program started as a pilot four years ago and has since become permanent, seeing 100 patients through it. To stay updated on new treatments, the staff is constantly retraining.

Webster points to the newest addition, a technology workshop. Melissa Oliver, an occupational therapist, produces a demonstration by focusing her eyes on a mounted iPad. The computer recognizes where she’s looking. She types a message with her eyes, which is then read aloud.

Oliver says a massive make-a-thon will convene here July 28 and 29, a testament to McGuire’s advanced rehabilitation care. Veteran care centers across the country will submit problems they hope McGuire can solve with technology.

Back at VCU, Cifu estimates that about 3,000 veterans from recent conflicts suffer from severe polytrauma. He also says about 200,000 have mild brain injuries compounded by post-traumatic stress disorder, known as PTSD.

He notes that the U.S. government has spent $60 million to study the efficacy of alternative rehabilitation programs. From dozens of studies, Cifu cites evidence of lost weight, less pain and lower blood pressure. Common side effects of painkillers, on the other hand, include weight gain, diabetes and heart disease.

“The issue is that vets need very individual treatments which are supported by lifelong health care,” Cifu says. “I see the benefits of that, and I believe that’s where we’re all headed, veteran or not.” S