Behind the scenes of a pageant that is building young role models. 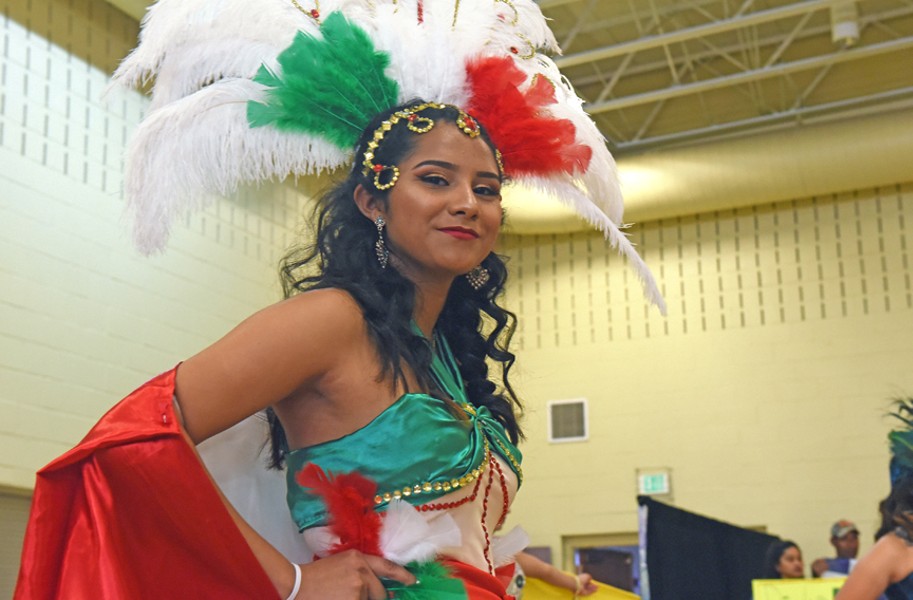 When the envelope is opened, a winner will be crowned.

It could be the talkative and friendly Lizmary Almonte, a Meadowbrook High School student of Dominican descent who aspires to work as a translator or in tourism.

Or maybe it's Michelle Ziegler, a James River High student with a bright smile, whose family comes from Venezuela. Someday she hopes to work in a federal law enforcement agency.

Then there's Isabel Gallegos, a student of Mexican descent at L.C. Bird. Her favorite subject is history, and she wants to run her own company one day.

They are among nine young women competing for the title of Miss Hispanidad Virginia 2018, a pageant that showcases talent, beauty, smarts and leadership.

And with few Hispanics in positions of power and influence in a region traditionally focused on black and white, Miss Hispanidad puts the contestants in leadership roles.

The winner is the reyna, or queen, and she'll wear the glittering tiara for a year, representing the pageant, and the Hispanic community, at local events in an elegant dress and sash. Her presence is meant to bring glamour and provide inspiration.

But before a winner is crowned June 24, there are weeks of preparation.

A preview of the bright pageantry and talent is on display May 6, during a five-hour pre-pageant talent show at the Ramsey Memorial United Methodist Church on Hull Street Road.

Family members and friends gather around 15 tables, cheering the contestants who make their entrances dressed in colorful clothing that represents their country of origin.

Isabel Gallegos struts to the microphone dressed as a Mexican Charro, in an outfit similar to a mariachi, with a crown of bright red flowers that matches a bow at her neck and her cummerbund. She lifts her chin and confidently tells the crowd in Spanish her name, her age and that she represents Mexico.

Gallegos' mother says later that the process of training for the pageant has changed her daughter from a reluctant to a bold teenager. 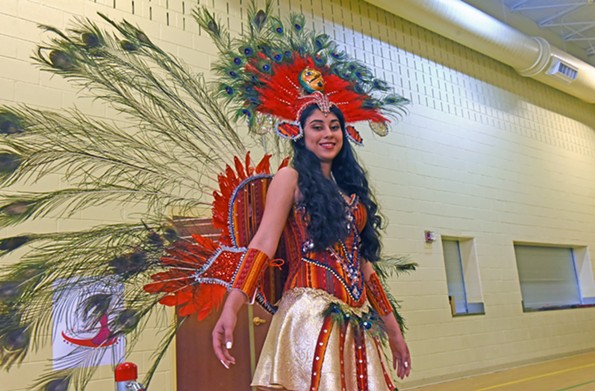 Loren Gonzalez wears an ensemble made in homage to the indigenous people of Guatemala, complete with a protruding ring of peacock feathers, gold heels and miniskirt, a bright red bodice, and a tall, red, semicircle-shaped Maya-inspired headpiece also decorated with feathers.

Michelle Ziegler shows off a sleeveless bodysuit of sparkling sequins, which conjures Carnival in Venezuela, accessorized with a flag of the South American country as a cape. She holds it up to display, drawing applause and cheers from her two tables of family and friends.

In the wide-ranging talent section of the show, Lizmary Almonte amuses the crowd with a comedy sketch parodying a recently arrived country bumpkin from the Dominican Republic, with large curlers in her hair who uses her chancleta flip-flop to get better cell reception.

"This is something that can help open doors for her," says her mother, Maria Rodriquez. "I am very proud of all she's done."

Gallegos recites poetry in Spanish that tells the audience they are beautiful because of their internal beauty.

"I want to cry," says her mother, Guadeloupe Meza. "Before she wasn't motivated. Now I see a complete turnaround. She's happier."

Thalia Gomez performs a dance with a boy about abuse while children hold up signs in the back that read in Spanish, "No to Violence." The audience leans forward, mesmerized. Some women cry.

"That was a very emotional performance," says her mother, Maritza Morales. "She's gotten a lot of confidence by doing this. Before she was timid. Also, she's not really a girly girl, but she's learned how to put on makeup."

Gonzalez demonstrates her artistic talent by painting a picture of a dark flower with a bent stem that she dedicates to a deceased sister and her mother, who cries in the audience.

Julia Reyes arranges flowers. Stefany Reyes and Ziegler dance to fast-paced merengue and tambor songs from their tropical countries. Audience members smile and clap along. Other times, supporters seem to be at an athletic event, waving banners and flags from Mexico, Guatemala, Honduras, the Dominican Republic and Venezuela.

Hispanidad, after all, translates to the Hispanic world.

The show also includes speeches, bantering MCs, food, a DJ, a live band during costume changes and a hip-hop ensemble dance by the contestants to Beyoncé songs. 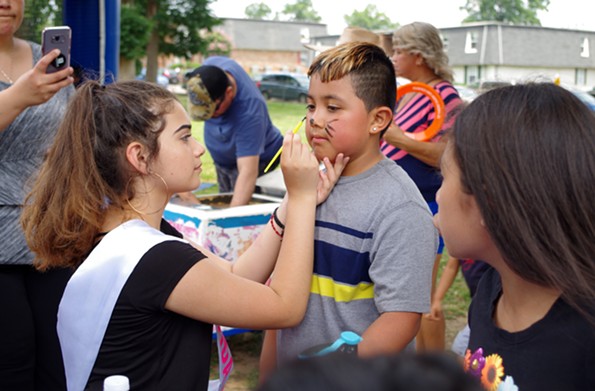 "If you look at these performances tonight, it means that this community is alive," says Gonzalez. "If you look closely, it is a window to joys, hurt, pain, talent and struggles."

In a time when President Donald Trump has put the spotlight on undocumented immigrants, making being foreign seem suspect and frightening for some, this is a pageant where bilingualism is desirable, pride in your country of origin is appreciated, scholarship is expected and beauty is valued.

Organizers say the event, in its sixth year, has affected many lives by awarding a $5,000 scholarship to the winners in installments for their education. A second runner-up, bi-reyna — or vice queen — and princess also will make the cut to hold roles and win prizes.

"The stereotype is that you just look pretty," Mendez says. "But it's more than that. We focus on intelligence and making a difference. Each girl has a platform focusing on something that they can fix or help. Mine was getting more involved with non-native-English-speaking students at my school because I noticed Hispanics dropped out a lot. I could see that was a problem." 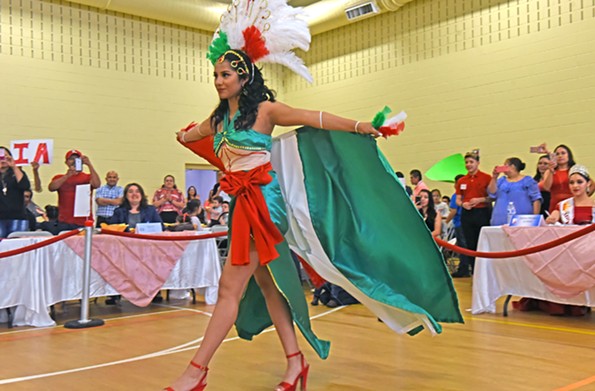 Indeed, only two in five Hispanic students graduate high school four years after entering ninth grade, according to state data reported by the Richmond Times-Dispatch in December. Data shows that 57 percent of Hispanic students in Richmond drop out of school.

For example, in Chesterfield schools, with a Latino student population of 9,536 (or around 15 percent of the school population) Hispanics have a higher dropout rate than African-Americans, with 152 leaving without a high school diploma last year. In the city proper, Hispanics total nearly 3,862 in Richmond's school system that has 25,000 students, with 5 percent of Latinos dropping out last year.

There are other beauty pageants in the area that feature populations beyond the mainstream — even a competing Miss Virginia Latina — but the Miss Hispanidad pageant has a heavy dose of community involvement and focus on scholarship in English and Spanish. 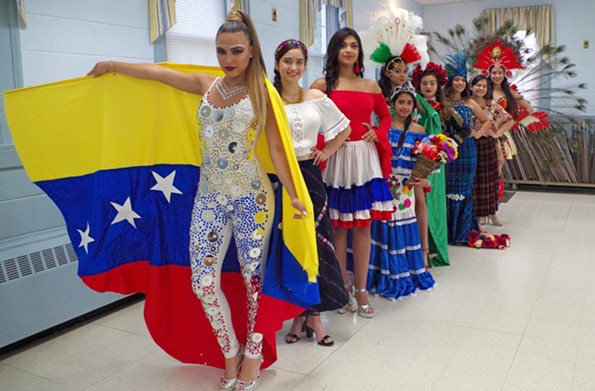 "The pageant raises the girls' self-esteem," says Maria Hernandez, vice president of the Hispanic American School for Advancement, the umbrella organization for the event. "The goal is to create leaders and role models in the community … to give them an incentive to be winners, to be the Queen and to go to university. We focus on the girls and push them to continue to study."

Training the contestants and working out the logistics of the pageant is a labor of love for Hernandez, the pageant's director Elaine Cupeles, and Juan Tejeda, the president and founder of the group — who also serves as the Richmond Hispanic community's police liaison officer.

The Miss Hispanidad experience is varied. Winners have visited the Virginia Holocaust Museum, worked on a variety of community service projects and completed fundraisers.

It's a role that the young women who reside in Richmond and Chesterfield have been working toward during their meetings throughout the weeks in a social room at Ramsey Memorial, where they have etiquette and protocol sessions in Spanish as well as learning how to walk the catwalk in heels.

On a recent Monday night, the teens pause from their training to speak about themselves, the pageant training process and what it will mean if they win. 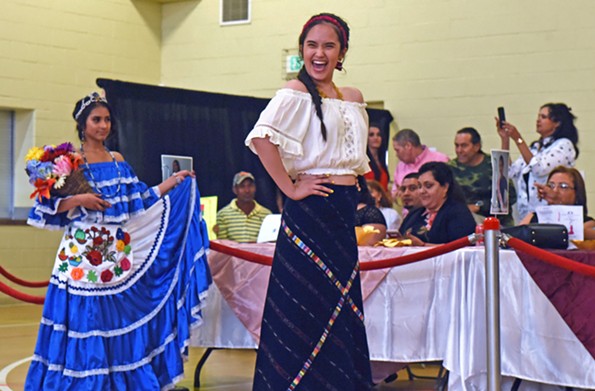 "It would feel great to be a leader," says Paola Izaguirre, a student at Academy 360 High School in Chesterfield, who's considering a career as a marine biologist, architect or lawyer.

"It was great when we went to Boushall Middle School for an event and the girls looked up to us," adds Julia Reyes, a student at Meadowbrook High School in Chesterfield who hopes to go to medical school after studying at the College of William and Mary, and then work with people with disabilities across Latin America.

Reyes says she doesn't view the pageant as a competition so much as an experience to get closer to her group of friends. And for her, a platform would include going to the U.S. Supreme Court, she says, "to be a voice and tell them not to cancel DACA," the Deferred Action for Childhood Arrivals program.

"If I had a platform that big I would use it not just for the Hispanic community," says Yasmin Paredes, a student at L.C. Bird High School who wants to be a school psychologist and work with special education students.

"I would direct it toward youth because being a teenager these days, it's a different time than when my parents were in school," she says. "There is a lot of stress at school and stress socially. But I would also speak up about the opposition to immigrants. If I had a chance, I would direct it toward the political party that opposes immigrants and ask, 'What have they done wrong?'"

Ziegler would want to convey a message of pride, she says: "I would represent Hispanics and be a role model and tell them not to put their head down."

The 2018 Miss Hispanidad Coronation will be held Sunday, June 24, at the Ramsey Memorial United Methodist Church, 5900 Hull Street Road, from 4-9 p.m. Find information and tickets at hasavirginia.org/miss-hispanidad-virginia, by calling 855-442-4272 or emailing info@hasavirginia.org.