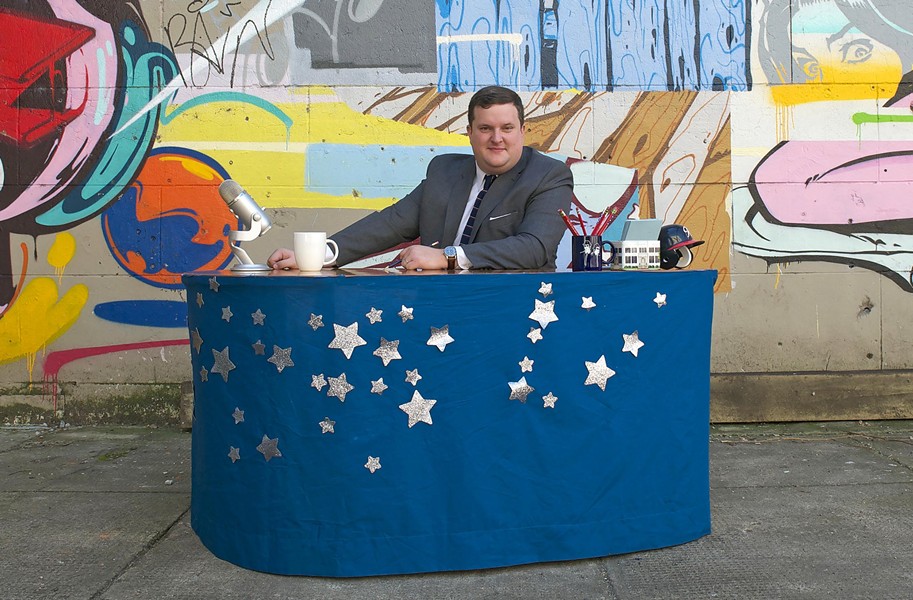 Although Beau Cribbs is accustomed to performing onstage, he was a little taken aback when he faced an audience that sat high above him at the Science Museum of Virginia’s Imax Dome.

It was a special setting for a recent episode of his mostly-monthly, fake-television talk show, “RVA Tonight,” which usually plays at the Coalition Theater. This crowd was bigger and the acoustics were a nightmare.

“It’s built in a way that if you’re up there trying to make a fool of yourself, you don’t know if it’s working or not,” he says in his self-deprecating way. “Because I was out onstage the whole time, I couldn’t discreetly tell someone, ‘Can you go up to the top and tell me if people are leaving?’”

Cribbs started the show last year to flex his creative muscles. Longtime friend Matt Newman was a co-founder of Coalition Theater, and although Cribbs had done a little comedy through the years, in 2013 he decided to start taking improv classes.

A trip to New York and a show at the Upright Citizens Brigade Theatre inspired him to start “RVA Tonight” with Newman as sidekick and Richmond as its centerpiece. It has a house band, monologue, guests and a desk. But it isn’t broadcast anywhere. The show is live, and it’s hard to get tickets to the sold-out performances.

Cribbs’ day job is as a public relations and media consultant — he has his own company, Relish Creative Communications. He also worked for then-Gov. Tim Kaine as his executive assistant.

After Kaine left for Washington, Cribbs invited him to his first show. And hey, he emailed the new senator, if he wanted to do something fun on it, that would be great. The next morning, Cribbs received an email from Kaine that said, “I’m in.”

Cribbs had booked his first guest, and started a show that’s added color and character to the area’s cultural identity.

“I think a lot of people in Richmond take themselves way too seriously — sometimes,” he says. And we’ve really enjoyed poking fun at those people.”

Cribbs also serves on the young associates board at the Virginia Public Access Project, a nonpartisan organization that tracks political money, and has written speeches for three of its fundraisers. But “RVA Tonight” is where he shines the brightest.