Down in the economic dumps? You might be suffering from a soul full of confused ghosts. How you too can tap your spiritual guides. 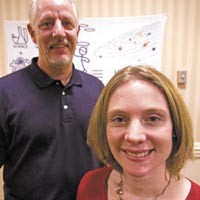 The stock market is tanking, unemployment is soaring, the country is embroiled in two wars, but Richard Lassiter has a simple prescription for our dire state of affairs.

“I think the biggest problem in the world right now is unhappy people,” he says.

At the Broad Street Comfort Inn, Lassiter makes this pronouncement to a group of a dozen, mostly women, interested in developing their psychic abilities. An artist, a corporate trainer and a Troutman Sanders lawyer are among them.

Lassiter, a Vietnam veteran and high-school graphic design teacher, stands taller than 6 feet and towers over his co-instructor, Melissa Kitto, a Kiwi in nationality and stature. They are certified spiritual consultants of the Inner Peace Movement. Central to their psychic-engagement regime is the ability to interact with the spirit guides that chaperone all humans on earth.

These beings can be called angels, or inner guides or souls — “it doesn't matter what you call them,” Kitto tells the group, “as long as you call them.”

Six guides accompany Kitto, she says. One is a yogi master from India who helps her “stay centered,” another is a Swiss merchant banker, helpful to consult on business decisions.

The guides refrain from micromanaging, instead confirming a hunch by giving Kitto goosebumps, or revealing the solution to something she's been puzzling over in bursts of inspiration. Recently, Kitto says, she had several heavy cartons to drop off at a used bookstore in Fredericksburg and the guides arranged a parking spot for her right up front. Satisfying personal desires seem important to the job of helping humans move toward achieving their lives purposes.

Not everyone who dies immediately becomes a guide, Kitto tells the group while Lassiter sits in back to observe. Only those who have mastered the lessons of earth will do. Stuck souls, or ghosts, still wander around trapped by the confusion of the life they just left or their failure to reach out to their own guides while living.

“There's more of this than we need around Richmond,” Lassiter says, striding up from the back of the room. The Civil War, apparently, generated an excess of lost souls. Some were killed so suddenly, and have since operated in a distorted spiritual dreamtime, that they aren't yet aware that they're dead.

“How many people do you know who are old blood around here that talk about things that happened during the Civil War?” he asks. “A lot of times it's not even them, they're channeling those lost souls.” Lassiter spent an afternoon once, down by Belle Isle, shooing away the spirit traffic. “The war's over” he called out, “go home.”

Lassiter had not been sure about interrupting Kitto with the anecdote, only 90 percent sure, so he checked with his own guides to confirm. The ability to check with one's spiritual guides is not a skill that can be learned, he says, but rather a natural state that one can access after unlearning years of social lessons clogging that spiritual channel. “Feeling someone's eyes on you” is a refugee instinct that survives after children lose their ability to conjure imaginary fiends and monsters under their beds. Lassiter and Kitto hope to help reconnect people with those gut feelings.

To help, the group participates in a few simple exercises. Kitto stands at the front of the room across from another woman in glasses to demonstrate an aura reading. She recommends focusing on the forehead — it's the third eye, after all, and it keeps the personality out of the way.

“Love,” she says, “that's the word I'm getting. Love, gentle, relaxed, sincere and growing very fast.” The room pairs up and stares at one another's foreheads.

Things overheard during the aura reading exercise: “Do you get chills when you hear the bagpipes?” and “Rainbows, to me, that's just very spiritual.”

Lassiter calls a middle-aged woman up to the front and sits her down in a chair. A group of four women circle around. They practice clasping their hands together, only their index fingers extended, on the count of eight. Then they focus their energies together while the woman in the seat thinks light thoughts. The four women lift the woman from the chair, with only their index fingers under both knees and armpits, several feet in the air. This, Lassiter says, teaches people to believe in themselves.

At the end, Lassiter makes plans to find a donut by midnight; tomorrow will be a strict day of fasting for him.

For more information about the Inner Peace Movement, click here.