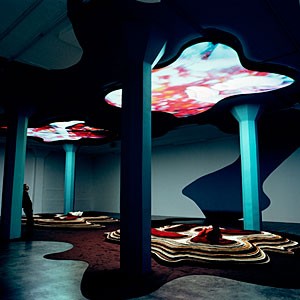 Sitting in the back seat of a car and staring out the window can transform a child's mind. The world shoots past as the youngster falls into a trance and thoughts wander into an undefined span of time. “The Nameless Hour: Places of Reverie, Paths of Reflection,” at the Anderson Gallery, brings us back to this primordial feeling.

The mind pieces together a reality bit by bit through personal experience — not unlike this show, which produces spheres of memories compartmentalized within the mind. The 10 works by artists Janine Antoni, Sigalit Landau, Paul Pfeiffer, Stephen Vitiello, Pipilotti Rist, Spencer Finch and Stephen Cartwright offer shared hallucinations. Here, everyone experiences the same surprise of an altered reality. It begs the question: If the surreal becomes uniform, wouldn't that make a new truth for us all?

In Paul Pfeiffer's “Morning After the Deluge,” a video projection of the sun is fixed upon the center of a screen, divided by a moving horizon line. This fluid motion exists as an illusion, creating the notion of above and below. The sun is one step away from a truthful reality as it melts into the horizon break, slowly altering the position of top and bottom. Two sunsets are stacked against each other. The sun sets into itself and rises again seemingly unchanged — a new perspective.

These altered views of truth and reality can be disarming. What is and should be often can cause people to re-evaluate their whole foundation of order. The consistency of science depends upon these perceived truths for the foundations of law. But chaos breaks the mind free of formulas and patterns. The simple effect of Spencer Finch's photographs in “Fog” do just that. Each layered image unveils a little bit more, changing the view and presenting an alternate truth.

In Janine Antoni's video, “Touch,” the artist showcases the sleight-of-hand effects that disbelief and wonderment are built upon. Antoni's efforts to learn tightrope walking allowed her in the video to simulate a walk on the horizon. Without the suspension of belief and the honesty to allow yourself to reconsider what you believe, these views of the world could never exist.

The most ambitious undertaking of altered states is the work of Pipilotti Rist. Her work, “Gravity, Be My Friend,” is a fully engulfing spectacle. Viewers rest on an island of carpets in the middle of a completely transformed room while a video is shown on an amorphous ceiling panel. Darkness and music fill the surrounding void. All of these elements combine and allow you to be within the landscape, making it tangible with sight and sound. The work holds you captive and your body becomes physically connected within an abstract representation of time.

The works of this show truly offer themselves to the viewer. The great efforts employed by the artists succeed in giving off a shared vision. These works are a contribution to the human experience on a personal level, allowing viewers to explore their own questions of reality and order and enable them to abandon an existence that may be physically contrived.

In the end, the paths of reflection leave a residue — not unlike a dream that imprints a memory. Your entire feeling is altered by something that happens within you, something only real within your own mind — these nameless places become your own sense of being. S

“The Nameless Hour: Places of Reverie, Paths of Reflection” is on display at the Anderson Gallery, 907 1/2 W. Franklin St. until Feb. 20. Visit vcu.edu/arts/gallery for information.