With a new book, a Richmond writer Andrew Blossom examines the human condition with creatures both real and imaginary. 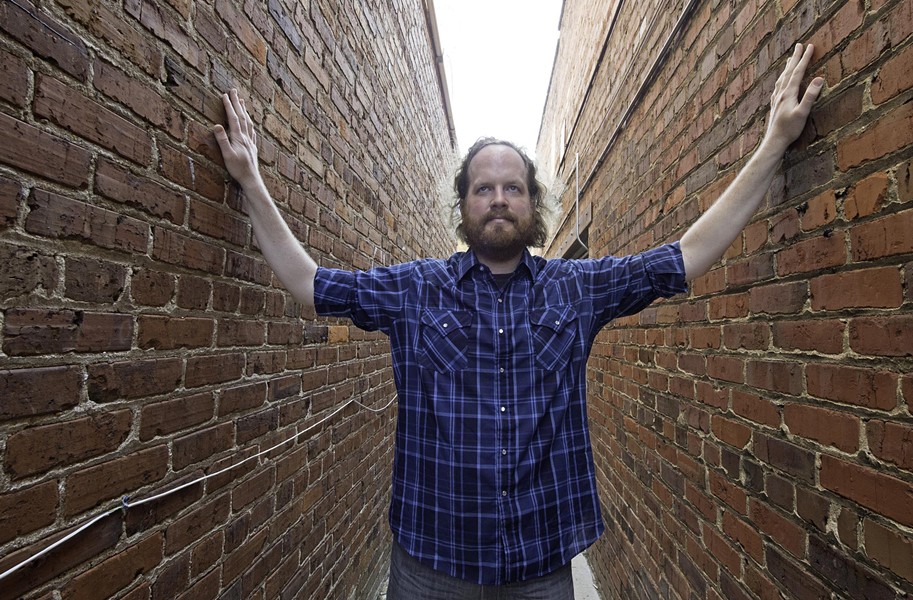 Scott Elmquist Andrew Blossom, who you may recognize from his day jobs at Chop Suey Books in Carytown and the Video Fan, has released a collection of fantastical short stories titled “I’ve Got a Message for You and You’re Not Going to Like It.”

If you haven't heard the legend of the skunk ape, Andrew Blossom has a message for you: This foul-smelling beast is lurking in the swamps of Florida or North Carolina or Arkansas, hoping to chance upon and impregnate some poor, unsuspecting waitress in the woods.

At least that's the way Blossom tells it in his short story collection "I've Got a Message for You and You're Not Going to Like It," published in April.

Tall, affable and sporting an Erik the Red beard, Blossom frequently can be found behind the counter at Chop Suey Books and Video Fan, serving as an arbiter of Richmond taste. In his writing, Blossom refuses to stick to conventional genres of literature, throwing elements of mythology, science fiction and whatever suits him into a Cuisinart and hitting purée. He uses these fantastical elements in otherwise realistic worlds to ask the questions of serious literature.

"I think the model exists in our world for genres of fiction to be a little more malleable than traditionally accepted," Blossom says. "These borderlines have been broken down a lot in our lifetime, and not by me."

In "Versus Beast," the short story's characters find themselves at odds with a skunk, a spider cricket and a woman who transforms into a massive, beheading praying mantis. "There's a Door and There's the Water" has a man being stalked by a unicorn, and "The Not-Too-Distant Future" features a divorcé who believes himself an astronaut after watching too much "Mystery Science Theater 3000."

"A Word from the Chimpanzees" is told from the viewpoint of a chimp that attacks his zookeepers because he believes they're after his females and "their sweet hairy chimpanzee asses." Blossom was inspired after reading about a horrific chimpanzee attack in California.

Throughout Blossom's writing is a prevailing theme of loss.

"It seems to me like the thing people are constantly surrounded by, and that's why I write about it," Blossom says. "If you happen to live a long time, you're going to lose the people that you love."

But even the bleakest of Blossom's tales are punctuated by a wry, understated sense of humor reminiscent of Mitch Hedberg.

"Stories about dark things should have the ability to be funny, because our lives are not about one thing or the other," Blossom says. "In stories like 'The Skunk-Ape of Legend,' the humor is what lets people accept it."

The genesis for the collection came from his work as the publisher of Makeout Creek Books. While working on his master's degree in fiction at Virginia Commonwealth University, Blossom founded Makeout Creek, a literary journal that recently published its sixth issue. Two years ago, Makeout Creek published its first book, a illustrated novel by artist R. Nicholas Kuszyk.

While Blossom is working to pull together multiple projects — including an anthology about rock music, a book about teaching in Qatar and an illustrated novel about fighting robots — none was quite ready for publication through Makeout Creek. Antsy to put out a new book, Blossom decided to pull together his short stories.

"Andrew really is a one-of-a-kind, unique writer — like Lydia Davis or Donald Barthelme," says novelist Tom De Haven, under whom Blossom studied in graduate school. "He doesn't write like anybody else. It might start from a bug's point of view. He's an experimental writer, though many of his stories are very warm too. His stories have a big heart."

De Haven says he suggested that Blossom submit "I've Got a Message" to some science-fiction publications for review. Blossom wouldn't hear of it.

"He just doesn't see himself even in that tradition," De Haven says. "He sees himself as a literary writer. That's his blessing and also probably his curse in being known, because it's very hard to describe what he does."

With De Haven and Brian Castleberry, Blossom co-edited 2010's fiction anthology "Richmond Noir." De Haven credits Blossom with pulling the collection together, as well as modernizing the system for judging the VCU Cabell first novelist award. He describes Blossom as a jack-of-all-trades, relating a story of Blossom's dexterity.

Most summers, De Haven goes to a writers' retreat in Maine, bringing a graduate student or two as interns. Instead of attending for just one summer, Blossom learned how to maintain the colony, operate the generators and keep things in working order. Now Blossom is on the retreat's board of directors.

"The rest of us are just a bunch of humanities people," De Haven says, "and he can take care of the island." S

"I've Got a Message for You and You're Not Going to Like It," is available at Chop Suey Books and at makeoutcreek.com.