Beam Me Back, Scotty


“Star Trek” thrills with a fresh cast while maintaining a silliness that defines the franchise. 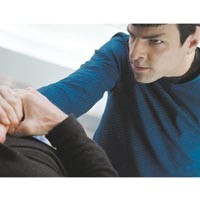 “To boldly go where no man has gone before.” It may be the familiar tag line of the “Star Trek” franchise, but the older the series gets, the more it banks on returning to the places it has already been.

While that's not necessarily a bad thing, it has never been more apparent than in “Star Trek,” the action-oriented reboot directed by J.J. Abrams (“Lost”), which casts a new generation of actors to play the familiar roles from the original '60s television series as recent Starfleet Academy graduates, albeit with a contemporary flair.

Dilithium crystals, we learn, are still the rage of the future. But the movie uses the distinctly 21st-century fuel known as nostalgia for a propulsive first half that drops off during a curious time-travel plot that allows allusions, references and reappearances to soar with the audacity of a Bird of Prey. At least one very recognizable actor from the original series shows up — several times — while the movie occasionally veers away from telling a good yarn to revel in the past.

“Star Trek” is not the origin story some might have hoped. It opens with an attack on a Federation vessel by a Romulan named Nero (Eric Bana), whose arrival from the future means the death of James T. Kirk's father and a revision of “Star Trek” history. The Romulans have acquired a substance called red matter, which can be used to create black holes when ignited. Nero and his band intend to ride around the galaxy eliminating Federation planets with the stuff, popping them with a pill of computer-generated destruction.

As might be expected, most of the attention has centered on new cast members. For the most part, they are up to the task of reinvigorating the movie. Zachary Quinto deserves special note as a young and still-conflicted Spock, although the lack of the defining, emotionless calm Leonard Nimoy brought to the original has been watered down in favor of a sexier version. Though Chris Pine does not mimic or mock William Shatner's infamously stilted staccato delivery as Kirk, his version is the less memorable of the two leads.

Other cast members inhabit their well-known parts with varying degrees of success, but aside from the excitement and sentimentality of their presence, and contributions of comic relief, they add little else. What “Star Trek” does well is have a lot of light fun making the kind of “Star Trek” movie we've come to expect while replaying favorite passages. What it doesn't do very well is make us care about Kirk, Spock and crew like we used to. The reason the best ship in the fleet is manned by teenagers and new recruits — what you might think would be the movie's point — is merely glossed over. It's not difficult to see a correlation.

In short, while the characters and costumes have been winningly refashioned, the plot is as awkward and convoluted as ever. If you feel a dash of silliness is part of the winning formula, “Star Trek” does not disappoint. No one attempts to rescue humpback whales or communicate with God, but humor and absurdity abound. The Enterprise engages in a tug of war with a black hole. Dire objections are overcome with empty arguments simply because they are forcefully delivered. There are enough last-minute saves to sustain half a season of new television shows.

It could be argued that freedom to experiment is what makes these movies more consistently enjoyable than other, stuffier, sci-fi fare. “Star Trek” is certainly more fun and easier to follow than anything George Lucas has pumped out in the past decade, even if it's guaranteed to lose its less-forgiving audience members during the moments it overrules physics in favor of photons and fisticuffs.

Only in a “Star Trek” movie would someone have to drill to the middle of a planet to destroy it with a black hole (wouldn't a black hole next to the planet do?). The only problem with the preposterous plot this time is that it annihilates 40 years of pop culture — for little discernable reason other than a mercenary one. To seek out new audiences and new revenue streams? Perhaps, but if what's come before is any indication, there's no need to despair for the loss of a past or future. Based on “Star Trek,” all it will take is a borg, a mind meld and one of Scotty's power diversions to set everything right in the next movie. (PG-13) 122 min. HHHII S