Beacon on the Hill 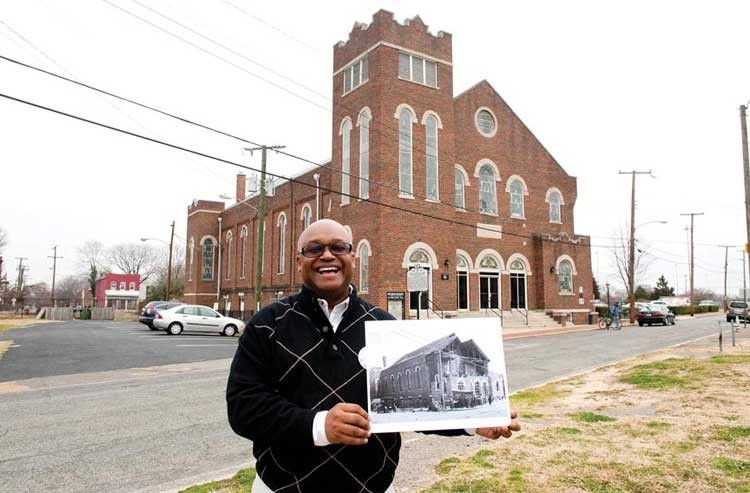 To this day, no one knows for certain why Sixth Mount Zion Baptist Church was spared.

Mid-century planners already had decided to route Interstate 95 right through the black neighborhood of Jackson Ward — and the church on Duval Street was in the way. Tear it down, they said, or move it. The proposed path of the mega-highway swung this way and that, church historian Benjamin Ross says, "but it always swung in our direction."

Yet the church's roots ran deeper than bureaucrats knew. The Rev. A.W. Brown rallied local organizations and universities behind his church. A City Hall elevator operator whispered the official chatter she overheard to church leaders. In the end, the interstate was shifted just to the north, leaving the red-brick church to stand sentinel over six lanes of asphalt.

"And we believe it happened because of the John Jasper legacy," Ross says. No one dared cross the fiery, controversial preacher who founded Sixth Mount Zion — even after his death.

Richmond is preparing to celebrate the 200th birthday of Jasper, who was born a slave July 4, 1812, the last of 24 children. His father, a preacher named Philip J. Jasper, didn't live to see his youngest son born. He made his wife promise that Jasper would be brought up with special attention, and so he was placed as a house servant on the Fluvanna County estate of his owner. As a teenager Jasper was leased to a tobacco warehouse in Richmond, and it was in this city that he experienced a religious conversion.

Jasper discovered that he had a gift for oratory and became a traveling preacher. (His factory boss didn't mind, Ross says, because he was paid $1 per day for each funeral that Jasper officiated.) His fame grew among white and black audiences alike, which was unusual for the time, Ross says. He was given the authority to minister to Civil War soldiers, and even after the war he preached reconciliation, telling newly freed blacks to let go of their anger at their former masters.

In 1867 Jasper realized his dream of founding a church. Its first home was an abandoned Confederate horse stable on Brown's Island. After two years it moved to Duval Street.

Jasper had heavy-lidded, penetrating eyes and a serious expression that belied his passion in the pulpit. "Women fainting and men crying … Some people described it as bedlam," Ross says.

A Bible literalist, Jasper is best known for a sermon he preached 273 times to white and black audiences alike. Known as "De Sun Do Move, Earth Am Square," it's a shrewd rebuttal of scientific fervor, a profession that God's power supersedes the laws of nature, and a stern warning not to place one's faith in human understanding. "Don't hitch your hopes to no sun nor stars;" he said, "your home is got Jesus for its light, and your hopes must travel up that way."

Jasper's church continued to grow after his death in 1901. The original building was enlarged in 1925 by black architect Charles T. Russell. The interior is now a warren of red-carpeted stairways, stained-glass windows and memorial plaques.

The highway decision, in 1957, proved a bittersweet victory. The interstate destroyed 700 houses and cut Jackson Ward in two. Where a once-proud neighborhood had been, the city erected isolated housing projects. "It scattered the members," recalls Delores Scott, 78. By the time the Rev. Tyrone E. Nelson became pastor in 2005, active members numbered just 125.

"The church had hit a low point," says Nelson, 38. But he knew how to bring younger people in. He held Saturday evening services in jeans. He knocked on doors. He advertised on Radio One. The congregation doubled in Nelson's first six months. Today it numbers about 1,000.

Among the new faces, the core membership remains. The ladies in the Victory Senior Adult Ministry, who last week were frantically stitching a Jasper quilt, have been members since childhood.

Barbara Whitaker, 65, was baptized at Sixth Mount Zion at 11. She left the church for a decade, when her work schedule demanded that she work Sundays. But when her mother was dying, she came back. Back to the church where her grandmother belonged (and would "give us the eye" for misbehaving, she recalls). Back to the church her grandfather's family attended in Jasper's day. "To my roots," Whitaker says.

While the neighborhood changes with the redevelopment of Jackson Ward and Carver, Sixth Mount Zion remains resolutely focused on the surrounding community, Nelson says. It runs the city's cold-weather overnight shelter for the homeless, provides meeting space for organizations and reaches out to residents of nearby Gilpin Court.

Sixth Mount Zion remains a traditional African-American Baptist church, Nelson says, but he mixes it up a little. Sometimes he wears a suit and tie and brings out the choir; other times the movie screen rolls down to show original skits (like a re-enactment of the devil tempting Jesus, filmed in Chimborazo Park) and the band plays contemporary music.

To this day, the roar of the highway permeates the sanctuary. But on Sundays, Ross says, no one can hear it. S

The Rev. John Jasper will be honored at Sixth Mount Zion, 14 W. Duval St. (648-7511) on Founder's Day, Feb. 19, with a dramatic portrayal at 9 a.m. and a special worship service at 10:45 a.m. On Feb. 23, Jasper will be discussed at the Virginia Historical Society's Banner Lecture Series at noon; then he will be recognized at the Library of Virginia's annual Virginia Trailblazers ceremony at 6 p.m.