"Devil Boys from Beyond" casts a campy spell. 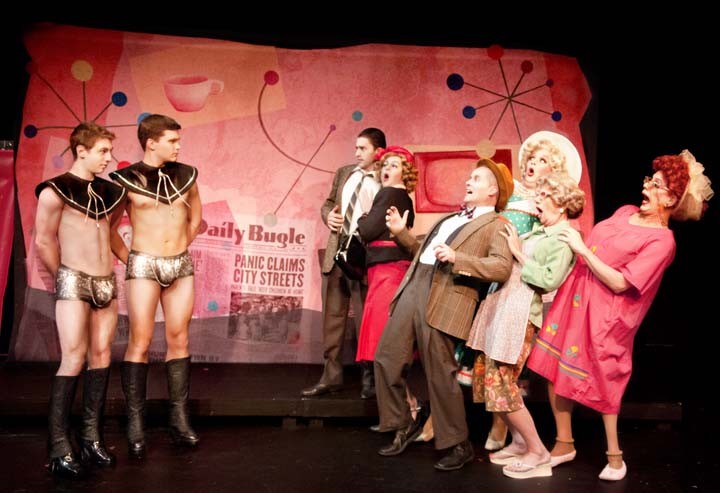 The latest production from Richmond Triangle Players — a cross-dressing comedy called "Devil Boys from Beyond" — is built upon a wonderfully wacky foundation. It's 1957 and aliens have invaded the swampy backwater of Lizard Lick, Fla. But because they're in the form of comely half-naked hunks, the women of the region are delighted instead of scared and are determined to keep meddlers from spoiling their surprising sexual bonanza.

The challenge for director James Alexander Bond is to spin these basic elements into a madcap romp, which he does in several deliriously funny scenes, most involving refreshingly unfiltered vulgarity. Alas, there also are a few sloppy moments that threaten to derail the entire enterprise.

Reporter Matty van Buren (Tommy Callan) and her estranged husband, photographer Gregory Graham (Ryan Bechard), are sent to Lizard Lick from New York to investigate the goings-on. They're tailed by gossip columnist Lucinda Marsh (Thomas Cunningham), who is bent on scooping them. Meanwhile, a pair of elderly and very faded Southern belles (Timothy Goad and Steve Moore) actively try to thwart the city slickers, happy to be making time — and babies — with their new alien boy toys (Kevin Cisek and Trey Harrison).

Cunningham is emerging as one of Richmond's great comic talents and his bitchy, sleazy Marsh is a hoot — except when he resorts to shouting his lines. Moore can elicit laughs just by striking a pose, but a gag with his character's faux struggle with a suitcase drags on too long. I ended up wishing for more of the off-hand humor offered by van Buren's editor, whose headlines have only a vague association with the truth, and who is played with hard-boiled desperation by Bill Brock.

The production benefits from ingeniously over-the-top costumes by the always dynamic designing duo of Rebecca Cairns and Ann Hoskins, and perfectly cheesy props and scenery coordinated by John Knapp and Daniel Jason. Despite the rough spots along the way, the conclusion includes a surprising message about tolerance. Call "Devil Boys from Beyond" camp with a conscience. S

"Devil Boys from Beyond" is playing at the Richmond Triangle Player's theater, 1300 Altamont Ave., through April 23. Call 346-8113 or go to www.rtriangle.org for information and tickets.