Sycamore Rouge's “The Odyssey” takes on an old story and a challenging setting. 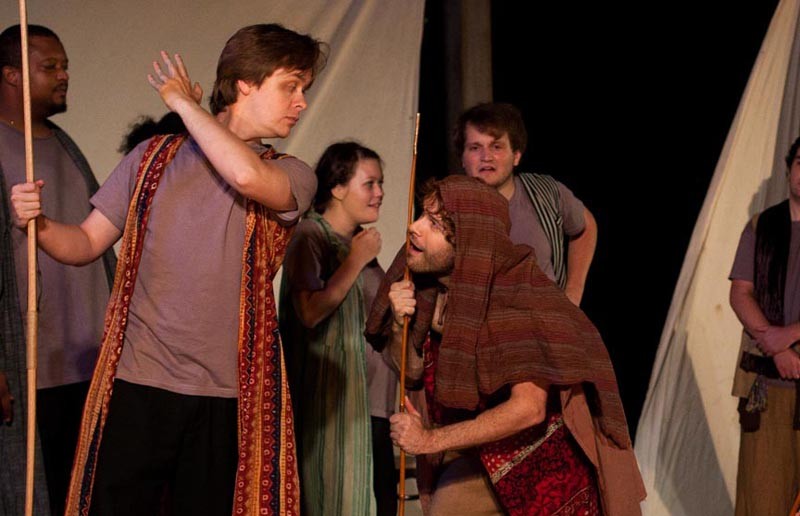 Centuries ago, the Greek hero Odysseus battled numerous forces both natural and supernatural to make his way home from the Trojan War, his difficulties making up the bulk of Homer’s epic poem, “The Odyssey.”

The adaptation of this broad-ranging story, produced by Sycamore Rouge, has impediments of its own to overcome. Staged in bucolic Battersea Park in Petersburg, the show is sometimes interrupted by the sound of trains; ambient music filters in from nearby neighborhoods; and recent storms have wreaked moderate amounts of havoc on the company’s equipment. And that’s even before we talk about the fundamentally episodic nature of the roughly 3,000-year-old tale.

But like the intrepid Odysseus, this production soldiers on and manages to provide an entertaining evening in which the occasional gem of a scene stands out among many that are just OK. Some of the best involve our hero’s domestic situation, Odysseus’s son Telemachus (Zac Moon) helping his mother, Penelope (Carolyn Hayes), fend off suitors that have overrun his house since her husband was presumed dead after being absent for 20 years. Meanwhile, Odysseus (Jeffrey Cole) has been having adventures akin to Capt. Kirk of “Star Trek,” battling monsters such as the Cyclops (Kamau Akinwole) or falling under the sway of exotic beauties like the enchantress Circe (Stephanie Linas) and the sea nymph Calypso (Ashley Maurisa Davis).

Director KB Saine has done her best to pep up the adventures, using imposing shadow puppets to evoke a certain nasty beast, for example. Her modern infusions are also energizing, like sirens who purr seductive phrases suited for beer commercials, such as “I love it when you ignore me.” Even so, the hero’s trek ultimately gets a bit tiresome, despite Cole’s convincing performance.

Several other performances stand out: Sandra Clayton shines in several roles and Linas is captivating both as Circe and as an inspirational mMuse, just to name two. Lighting designer Brittany Diliberto deserves special recognition for achieving dramatic effects in an outdoor space, bathing the stage in red at one point for Odysseus’s visit to the underworld. If not for these assorted delights, this “Odyssey” would just seem overlong and a bit futile.

Sycamore Rouge’s “The Odyssey” runs Thursday through Saturday nights at 8 until July 16 at Battersea Park, 1289 Appomattox St. in Petersburg. Admission is free but a $10-per-car donation is suggested.