Jolie and Pitt get caught up in the action-packed romance that broke Jen's heart. 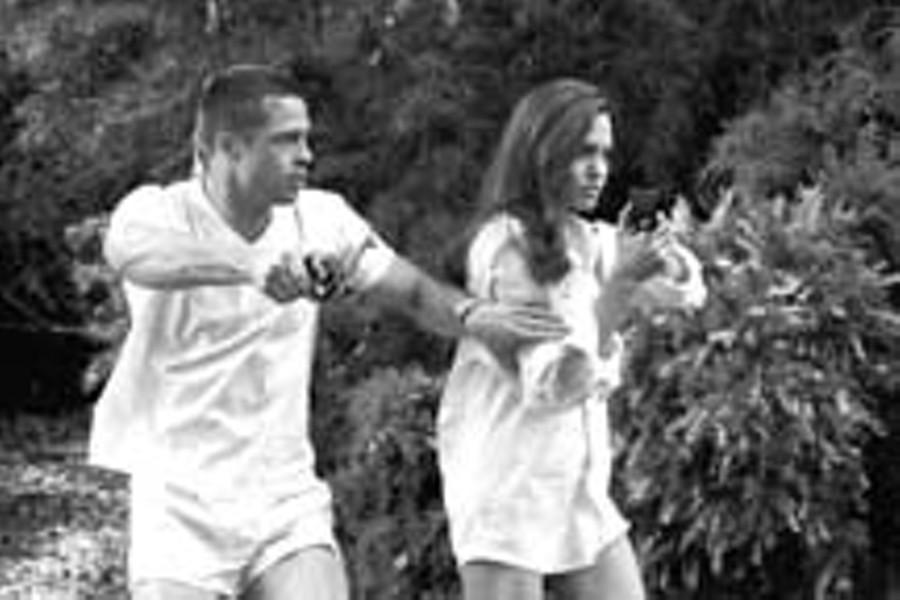 Pitt's John must keep it on the down-low by creeping early in the morning under his garage into a hidden armory stocked with every conceivable firearm save a muzzleloader. Jolie's Jane waits at the curtains for her husband to drive off before tapping a secret series of buttons on her microwave, which unfolds into her own cache of nimble daggers and pistols. Off they go to put a cap in some nameless thug's head for some undisclosed offense at some untold price — the movie is vague about its broader relationships — returning in time to argue about curtains and eat a quiet dinner.

Jolie's character works for a company that looks like Charlie's Angels cast in an old Calvin Klein Obsession ad. (Must an all-black ensemble always be the Hollywood symbol for refined violence?) Pitt works for Vince Vaughn, a much less clichéd representative in the murder-for-hire business, sporting sloppy outfits around the dusty and cluttered house he shares with his mother. (During its all-too-brief Vaughn moments, the movie takes off with a buoyant impertinence that seems to be the goal.) When the dangerous duo eventually find each other out, they realize with a wry smile that they are now free to solve six years of bickering and bad sex by killing each other. We, on the other hand, realize we've just been duped out of our ten bucks for a premise, and a rather gross one at that.

This is the country of violence, of spousal abuse and terrorism, and here we have a movie that revels in man and wife chasing each other around their palatial suburban home with semiautomatic weapons. It wants us to gloat over a husband punching his wife smack in the face and laugh when she kicks him … la "Boyz N the Hood." Jen may find this last part appealing, but some may wonder about the implications.

"Mr. and Mrs. Smith" looks and feels like a contemporary action movie should, but it never comes into its own, and it's hard to tell what's been accomplished in the end, except maybe a test screening for potential sequels. Cinematically the movie is fast paced, serving redundancies common to most fantasy/action fare. Director Liman's camera is never still, leaping and dodging like a puma as his story lies there like a dead cat. The film relies on a relatively recent principle that the flashy ephemera of gunplay, snappy dialogue and skin can stand on its own. Unfortunately it loses sight of the relationship between Pitt and Jolie. It had potential, especially when the premise was nosing around such plot-driven rarities as the dinner table and turning an inquisitive eye into the bedroom.

Pitt gives the sturdy body of his married man the slippery skin of a bad boy, and Jolie is perhaps the first actress since Demi Moore who could go toe-to-toe with the most dangerous A-list male lead. Alas, ignorant of such things as chemistry, Liman presses clumsily along with rock music and explosions. He's got a premise and a twist to convey here, people.

Trey Parker and Matt Stone took dead aim at the action movie in "Team America: World Police." But that fine satire is lacking in a queer entity like "Mr. and Mrs. Smith," which escapes by not being genuine enough to be taken seriously. It is pure cynicism, an arrogant cinematic equivalent of "let them eat cake" aimed directly at the tabloid reader piqued by the lurid tales of its stars. (PG-13) * S