We challenged Kevin Sheffield to make a cocktail you can sip throughout the holidays.

Yes, Thanksgiving is almost here. Soon, we'll be in the throes of jingle bell overload, but that doesn't mean we won't still want Thanksgiving dinner the following week, again and again and again. Perhaps for lunch, perhaps at 2 a.m. after a night of drinking — maybe we even want it for breakfast.

Luckily, Wawa, the finest of the gas-station dining establishments — sorry, Sheetz — has us covered with its popular seasonal turkey bowl. That would be turkey, mashed potatoes, stuffing and cranberry all mashed together in a bowl — topped by gravy, because duh. It also comes in a "gobbler" — or sub — form if you're really in a hurry to take a nap. We've found that it's the next best thing to grandma's Thanksgiving cooking.

So why not enjoy a cocktail as you enjoy untold amounts of calories and shame?

We asked Kevin Sheffield of F.W. Sullivan's, Lady N'awlins Cajun Café and Cha Cha's Cantina to come up with a drink that evokes — and pairs well with — the turkey bowl. His creation, we found out, was a nice little dessert after the main feast. "The muddled cranberries, plus the garnish of the cinnamon and smoked marshmallow will give it that Thanksgiving flavor," Sheffield says. And we presume that the whiskey will help wash off the regret of eating Thanksgiving dinner in bowl form.

When it comes to timing, the bartender tells us, "[There's] never a wrong time to have a turkey bowl and a cocktail."

"Just drink responsibly," Sheffield says, "and always call an Uber — especially if I make it." 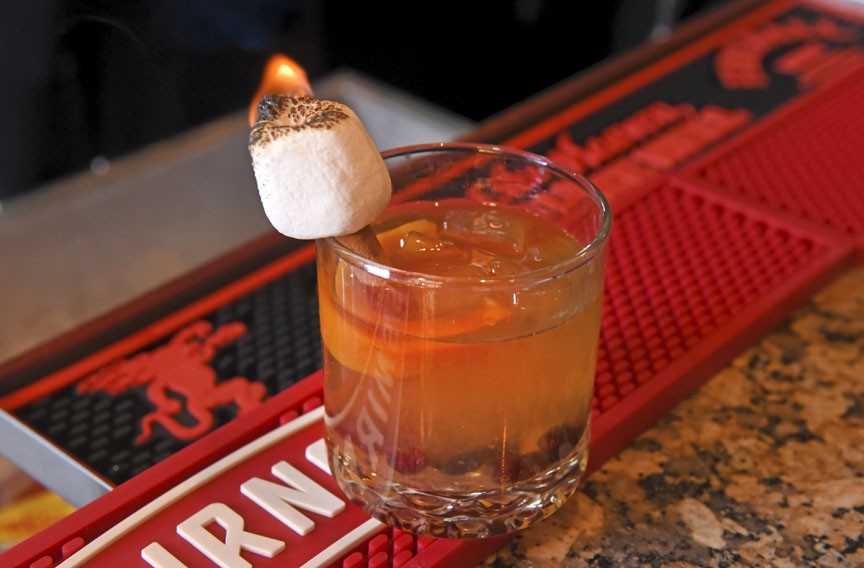 Put the orange peel, 3 cranberries and 2 sugar cubes — or two dashes of simple syrup — in a rocks glass. Muddle. Add 2 ounces of rye, three dashes of bitters and a splash of water. Stir well. Add ice. Garnish with the cinnamon stick and a flaming marshmallow. Serves one.