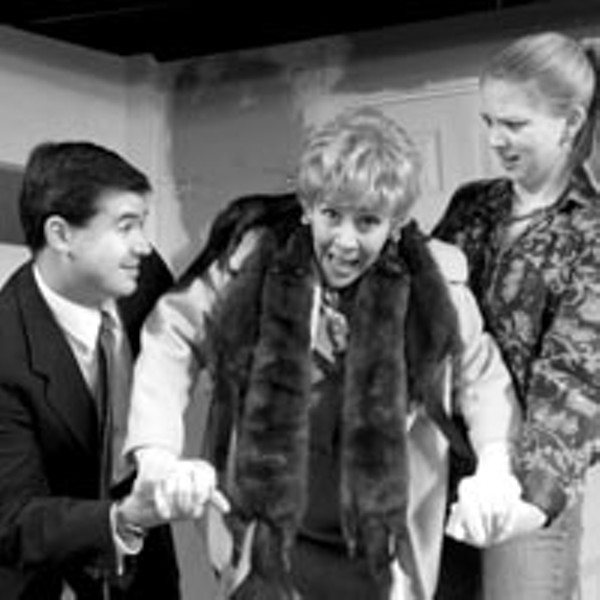 But celebrated playwright Neil Simon doesn't shortchange the human characters who inhabit this quirky apartment. They are wonderfully drawn, and under director Jan Guarino's adept guidance, masterfully played. Molly Hood and Tony Foley are Corrie and Paul Bratter, an eager young couple married all of six days. Though clearly moony-eyed in love with each other, they also have some obvious differences: Corrie is impetuous while Paul is cautious; Corrie is romantic while Paul is practical.

Within minutes of moving into their new apartment, fissures start to appear in this couple's imperfect union. Add in unexpected visits from Corrie's widowed mother, Ethel (Joy Williams), and the peculiar, but dashing, upstairs neighbor, Victor Velasco (Joe Pabst), and these cracks start to widen. After an ill-considered double date goes sidesplittingly awry, the newlyweds seem on the verge of becoming newly divorced. But just as Dharma wouldn't be anything without Greg, you can bet that these two will realize they belong together before the final curtain.

Guarino assembled a winning cast for this show, which had sellout runs for the Barksdale both in 1967 and 1972. Hood, in particular, is captivating as Corrie, her wide eyes projecting innocence, her quick wit revealing an unexpected intelligence. A Richmond newcomer, Foley slips into the role of Paul like hand into glove, turning what could be a cliché character into a person with depth and three dimensions. With her flawless comic timing, Williams threatens to run away with the show at several turns but is well-balanced by Pabst, amiable and engaging as the aging lothario Velasco.

Costume designer Sue Griffin apparently had a good time picking out some striking '60s-era frocks so that there's a brief moment of expectation every time Corrie takes off her overcoat. The reveal never disappoints. Set designer Terrie Powers also deserves notice for the nifty New York backdrop visible through the large central window, as well as for ably outfitting the all-important apartment.

It's appropriate that the setting plays such a central role in this production that marks the Barksdale's return to its original home, Hanover Tavern. Beyond the interior of the theater, the improved and renovated tavern will be nearly unrecognizable to those who haven't ventured out to the historic building since the Barksdale moved to Willow Lawn nearly a decade ago. Entrance to the theater is now through an expansive back patio, and the amenities inside are top-notch. Barksdale has chosen well for its return to the Tavern and, judging from the bountiful laughter I heard at the soldout show I attended, it's a setting that many Richmonders will be returning to with pleasure. S