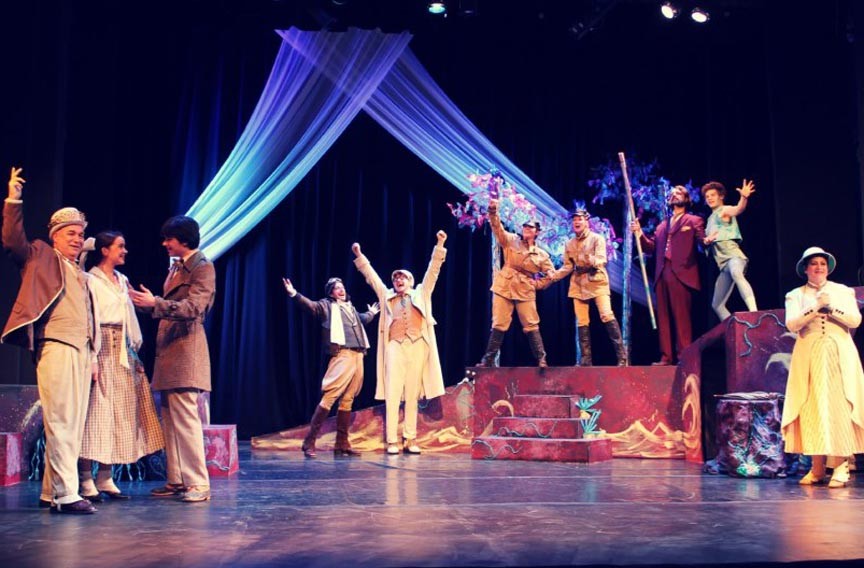 While there's no evidence to suggest that Shakespeare ever left England, the inspiration for his romance "The Tempest" very well may have come from Virginia.

In 1609 the Virginia Company's flagship Sea Venture ran aground in a storm on its way to the budding colony. Capt. Christopher Newport, John Rolfe and Virginia's newly appointed governor, Sir Thomas Gates, were among those stranded near Bermuda for nearly a year before completing the journey in two makeshift vessels.

The story of shipwreck and survival made quite a splash in England, and as many of the Bard's friends and supporters were members of the Virginia Company, most scholars believe the tale greatly influenced "The Tempest."

In transporting the setting from Bermuda to the Mediterranean, Shakespeare adds a dash of magic and romance to this story of survival. After being usurped as Duke of Milan by his brother, Prospero and his daughter, Miranda, are stranded on a desert island. Twelve years later, a ship sets forth from Naples carrying the court responsible for Prospero's overthrow. Having studied magic during his confinement on the island, Prospero takes revenge on those who wronged him by summoning up a powerful storm that drives the ship aground on the island.

Richmond Shakespeare's telling sets the tale near the turn of the 20th century and bears some resemblance to "The Lost World" (Arthur Conan Doyle's, not Michael Crichton's). This production also features younger performers than usual, most notably with the casting of Charley Raintree as Prospero. The sorcerer usually is played by a much older actor, but the unconventional choice works here by showing the character at the height of his power and full of hubris.

Raintree does good work as the headstrong Prospero, as does newcomer Isabelle Andrews as the lovesick Miranda. As Ariel, John Mincks gracefully leaps about the stage with all the poise you'd imagine of a spirit. David Janosik and James Murphy are equally amusing as the drunks Stephano and Trinculo. The show's only misstep is in the portrayal of the villainous island native slave Caliban. Though Jeremy Gershman gives an extremely physical and well-acted performance, the decision to make the character more pitiful than evil makes Raintree's Prospero seem unnecessarily cruel.

James Alexander Bond's direction makes a number of interesting choices, such as changing the age of Prospero, playing with the show's setting and substituting a zeppelin for the wrecked ship. Rebecca Cairns' costumes are suitably Edwardian, and B. J. Wilkinson's lighting further emphasizes the exotic setting. While imaginative, J.D. Jump's set looks thrown together and amateurish, from its visible wooden boards to the random collection of gold-painted seashells pasted to the wall in one area.

While "The Tempest" has some minor issues, overall it's an enjoyable evening of theater, filled with magic, love and redemption. S

Richmond Shakespeare's "The Tempest" plays in the McVey Theatre at St. Catherine's School, 6001 Grove Ave., through Saturday, March 30. For information, call 232-4000 or go to richmondshakespeare.com.