Capital One Cafe in Richmond serves coffee and financial advice. 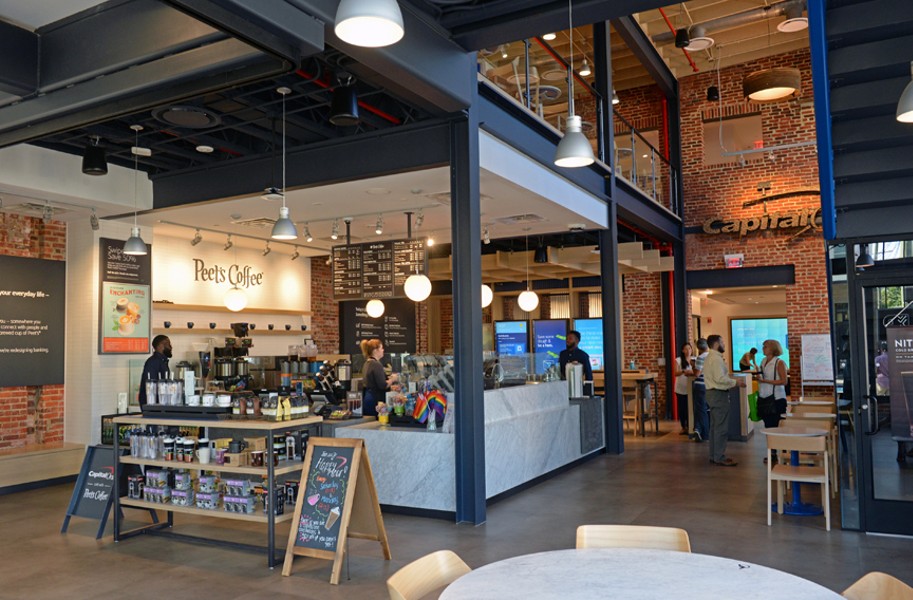 Scott Elmquist Peet’s Coffee and banking are available at the Capital One Cafe in Carytown.

Part bank, part coffee shop, the Capital One Cafe opened in Carytown in late June. Located at 2933 W. Cary St., it's across the street from Sugar and Twine and blocks away from other local spots like Cartwheels and Coffee, Lamplighter Coffee Roasters and 10 Italian Cafe. So what's the draw? According to Tommy Izzo, who's worked for Capital One for eight years and now holds the title cafe coach, it's about comfort.

"We knew we had to create an environment that would put people at ease, and what's more comfortable than sitting with a cup of coffee in your hand?" Izzo says. "That's really where the coffee comes in. It allows us to kind of fit into people's lives."

It's the second of its kind in the Richmond area, the first being in Short Pump. The space, formerly occupied by Secco Wine Bar and Sheppard Street Antiques, still has the Carytown feel to it — exposed brick wall, giant windows, lots of natural light, charging stations and communal tables. As for the coffee counter right in the middle, it feels much like any other cafe, with an extensive espresso menu featuring the San Francisco-based Peet's Coffee, boxes of tea on display and baked goods from Pearl's Cupcake Shoppe.

"A common theme in all the cafes around the country is showcasing something local," Izzo says, noting that all 33 locations serve Peet's, which was founded in Berkeley, California. Also local? The whimsical mural on the building's exterior, painted by Oregon Hill-based artist Chris Milk Hulburt.

The roles of baristas and bankers are completely separate, Izzo says, to ward off confusion. The person behind the coffee counter can direct a customer looking for financial advice toward the ambassadors, whom he says float around the cafe.

"The idea is to keep the environment pressure-free," he says. "We're not trying to push people into banking conversations, but we want to be available on the floor if somebody needs us. If you just want to come in and get a latte, that's completely fine."

Click here to read more of the Coffee Issue