For one "War Horse" star, it's all about the journey home. 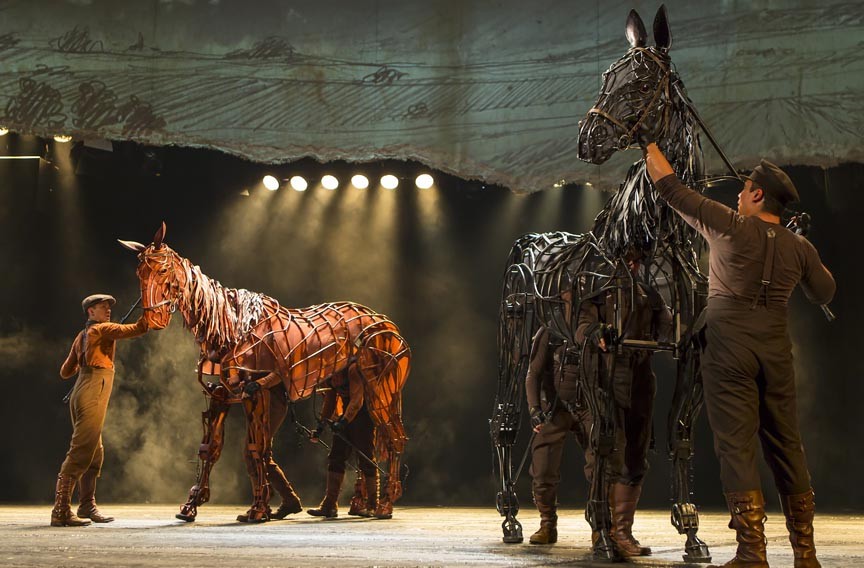 When author Michael Morpungo was first approached about adapting his children's novel "War Horse" for the stage, he thought they'd gone mad.

His book — which Steven Spielberg turned into a film — followed a young man and his horse as they enter World War I. But adapted for theater? Morpungo wondered how they could portray a central character that was a horse. The answer was puppets.

Because the story is told from the horse's point of view, no sides are taken in the fighting, focusing instead on the universal suffering caused by war.

"I think people will be blown away by the power of the show," says Michael Wyatt Cox, who plays the young man in the show's national tour. "It's a spectacle, really, but it's also a simple story, and a heartwarming story."

When the show begins, Cox's character, Albert, is 14, watching a foal get auctioned. His father drunkenly bids on the horse, which Albert raises and names Joey. While World War I breaks out, Albert's father sells Joey to the cavalry, breaking his word to Albert that he'd always own the horse. This launches Albert and Joey on a journey through gas, machine guns and barbed wire to find each other and return home.

For Cox, appearing in the show was a homecoming in itself. The 26-year-old grew up on a small farm in Florida and owned a couple of horses as a child. His parents were veterinarians who focused mainly on equine work, and his mother rode competitively.

"They were always a part of my life, and now they really are," says Cox of horses. "It's really cool to be around them again, even though they're puppets."

Each horse is elaborate, operated by three puppeteers. The puppets mimic a horse's every move, and Cox gets to ride them during the course of the show.

"It's really exhilarating," Cox says. "They're real animals when they're up on stage. They're amazing works of art, and amazing animals."

But riding a puppet held up by three people took some getting used to. "The first time you do it, you're thinking a lot about the people underneath," he says, "but they'll tell you that they're fine. Once you can let go of that, you can relax and enjoy it. It's a lot of weight on their shoulders."

Though the show focuses on the hardship caused by war, Cox says this is only to emphasize a message of peace. "Even with these strong themes, they still recommend that kids come," Cox says. "It's a journey to say the least." S