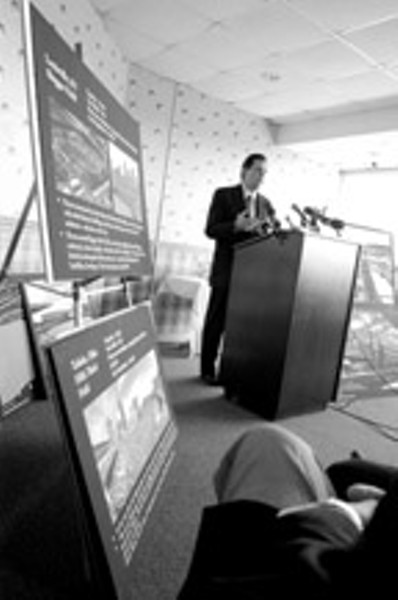 “It’s going to have a public-private element,” says DuVal, adding that it’s too early to know which funding options would work best. A CDA is one of many options being considered, he says. Once a developer is selected — four are submitting plans by the end of May — the financing needs will be clearer.

Municipal bonds like those of the Broad Street CDA are attractive to big institutional investors because they offer a steady, reliable return backed by local government. Local governments like them because using them allows the building of public infrastructure without taxpayer dollars. If the payments fall short, however, often the locality must guarantee the loan. And it also typically has to forgo some real estate taxes or other public revenue that’s redirected to investors.

A ballpark CDA would probably be much smaller than the Broad Street bond issue, sources say, and could only be used for publicly owned infrastructure, such as roads, sidewalk improvements, and, if it remains under city ownership, the ballpark itself. Special real estate taxes could be assessed to pay off the debt.

“There is a limited toolbox of mechanisms that a public-private partnership can utilize, and we’re looking at all of them,” says Edwin Gaskin, deputy director of economic development for the city. Gaskin wouldn’t say if a CDA is being considered.

Attaining public financing for the stadium is critical to moving the project forward. Last week, Tim Davey, an engineer at Timmons Group and a key backer of the Richmond Ballpark Initiative, said the ballpark itself would probably cost between $30 and $40 million. The additional development around the stadium – plans call for retail, offices, and even a hotel – would be paid for by the developer.

The Richmond Braves have agreed to commit a “several million dollars” toward the project, Richmond Braves General Manager Bruce Baldwin has said, but there is still a considerable funding gap.

A ballpark CDA appears to be an attractive option.

“I think it would be very difficult to commit additional resources from the city taxpayers,” says City Councilman Manoli Loupassi, adding there are other obstacles that stand in the way, such as angry neighbors. “They’ve got a very large mountain to climb.” — Scott Bass