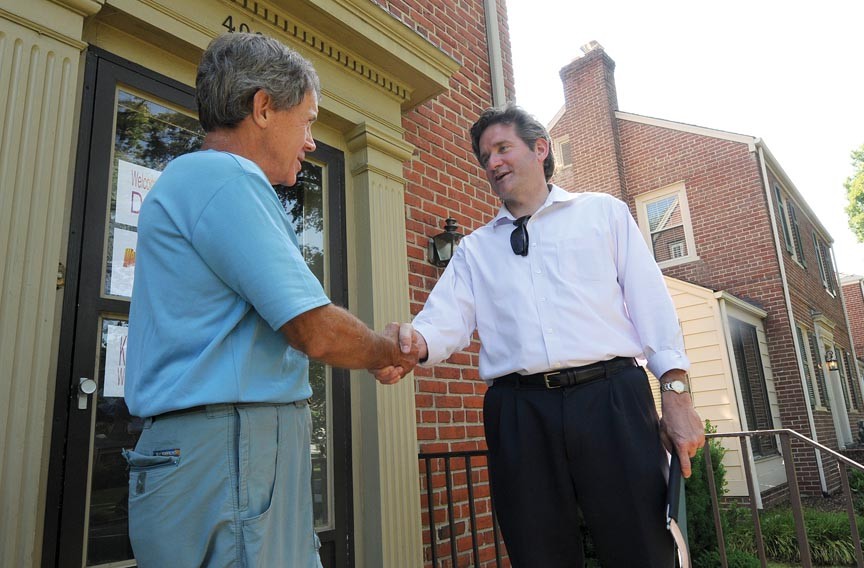 Homeowners answer the bell with the usual trepidation. Jon Baliles may be the son of a former Virginia governor, but he remains a stranger in the near West End.

Baliles, 41, may be best known for his biting analysis of city politics on his blog, Rivercityrapids.com. Now it's geared toward local arts and cultural events. He was hired as a press aide to former Mayor L. Douglas Wilder in 2008, and then became assistant to the city's director of planning and review. Friday is his last day.

In a year that's expected to produce a lax campaign for mayor — so far, only former councilwoman Shirley Harvey and activist Rick Tatnall have filed to run against Jones — Baliles may be the biggest name to challenge for city office in November. He also represents a renewed interest in city politics.

Most of the attention this season will focus on the Richmond School Board, where 16 candidates have declared. Among them are Jones' son, the Rev. Derik Jones, in the 8th District, and longtime political strategist Rich Savage, who's among four candidates vying for the 4th District seat. Daisy Weaver, the well-regarded former chief of staff for City Council, is running in the 2nd District.

"I think it's a really good thing," says Tom Shields, director of the Center for Leadership in Education at the University of Richmond. "And it shows you how people really take service in the city seriously."

Challenging Tyler won't be easy. Once seen as vulnerable, he's been one of the loudest voices on council since Jones took office. "We got a mayor who is mediocre at best, on a good day," says Tyler, who considered running for mayor but opted against it earlier this spring.

Tyler is known for responding quickly to residents. When Pond's daughter, Maura, was in an accident a few years ago in the Fan, she sent Tyler an email about the limited visibility created by corner curb parking. "She sent him an email, and almost immediately steps were taken," Pond says. "It was just a very good experience."

Baliles says he's ready to bring a new kind of leadership to the city. But first he must convince Richmonders such as Pond.

"I would certainly be torn, I tell you that," Pond tells him. "But you certainly have the pedigree for it."